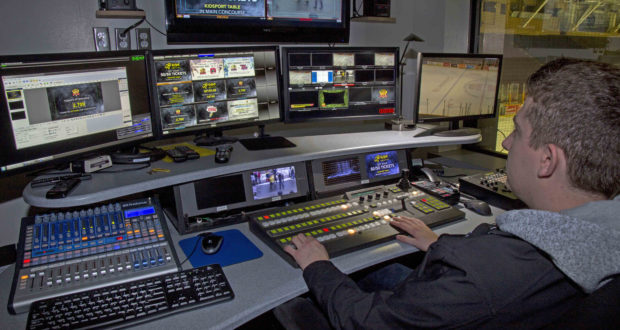 Chelmsford, Massachusetts – As part of a unique partnership, students from Canadore College’s Broadcasting and Video Production program in North Bay, Ontario, use a Broadcast Pix™ Granite™ 2000 integrated production switcher to provide scoreboard video coverage of the North Bay Battalion hockey team at the North Bay Memorial Gardens Sports Arena. The city owns the arena, but the Canadore staff built the control room and provides engineering services for its video equipment.

Installed in late 2015, the Broadcast Pix system was part of a multi-million arena renovation that included an HD video scoreboard above center ice and an updated control room to support full HD production. Yura Monestime, interim 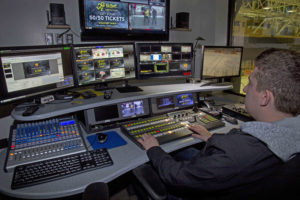 associate dean for media, design and dramatic arts, recommended the Granite because it provided more inputs and functionality than the previous switcher.

A 30-year production veteran, Monestime was impressed with the Granite’s ease of use and built-in features. “The workflow has greatly improved,” he added, “and I think the quality of the program – just the responsiveness – has improved, and all in HD.”

Part of the Ontario Hockey League, the Battalion relocated to North Bay in 2013. Melinda Fry, the city’s manager of sports and events, said the team reached out to the college to recruit students to produce the video scoreboard presentations. Now, a city employee (and Canadore graduate) oversees the productions, but students run almost every aspect of game day productions, including cameras, graphics, and slo-mo replay.

“We thought this would be an awesome experiential learning opportunity for the students,” Monestime said. “It’s one of the best options they can have. It’s a real client that requires a certain level of quality and the students perform.”

The video scoreboard game coverage uses three cameras. The main camera, a remote PTZ, is positioned at center ice and stays wide, while a second camera with studio configurations is controlled by a student and provides a tighter view of the action. A third camera is wireless and stays close to the ice for crowd interactions throughout the game. Every home game is also produced separately for broadcast, and the Granite has a dedicated input to include replays from the broadcast feed for particularly exciting game action.

Beyond game coverage, students also handle production duties for conferences, ceremonies, and other events at the arena. Plus, students shoot Battalion players volunteering in the community, and the footage is shared during games using the Granite’s built-in clip store. Mike Griffin, president of the North Bay Battalion, said the improved video presentations are “enhancing the value for fans to sit in the stands and be entertained.”