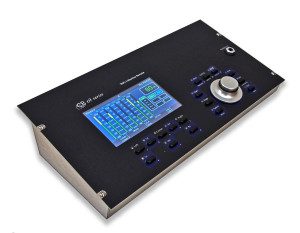 CB Electronics recently installed the TMC-1 Penta in Pinewood theatre 6, a Dolby Atmos room at Pinewood film studios. A second TMC-1 Penta has been installed by a Television Network sound engineer in Chicago.

There are a host of new features for the TMC-1 monitor controller which have been developed in response to requests from the wide user base of varied applications for the TMC-1. More details are available at Colin’s blog www.colinbroad.com/cbsoft/blog/blog.html

Colin Broad, CB Electronics CEO and designer said, “Monitoring is a very important part of the production environment, our aim is to make it easier to work in different formats, easier to install and to include features that you would expect to find only in large console monitor sections. The TMC-1 Penta is a software configured system that you can purchase now with the knowledge that you are not locked into a fixed solution.”

Colin Broad will be on the stand 7.F06 at IBC to demonstrate the new features and explain how the TMC-1 can be used will all monitoring formats including a full Atmos and/ or Auro system.

CB Electronics are specialists in Time Code, Biphase, Serial Control and Remote Control. Colin Broad is the man behind CB electronics. For years, the film and broadcast community have relied on his expertise to solve a range of problems in the area of machine and system control. In fact, you would have to search hard to find a UK film dubbing theatre without at least one of his products, known to all as ‘Broad Boxes’. They are also a common sight in dubbing theatres across the world. Because big film dubbing theatre requirements are so complex most of the previous products have tended to involve a degree of customisation to suit individual requirements.

In 1994 Colin Broad received an Academy of Motion Picture Arts and Sciences Technical Achievement Award in the category of Sound for the design and development of EDL (Edit Decision Lister) which creates encoded time code track and database during the initial transfer of the production sound dailies.

In 1994 Colin Broad was awarded the BKSTS Phil Berkley award for his work in Video Post production.
In 1996 CB Electronics Received the Satis-Fecit for the SR-4
In 2010 Colin Broad was made a Fellow of The Association of Motion Picture Sound.