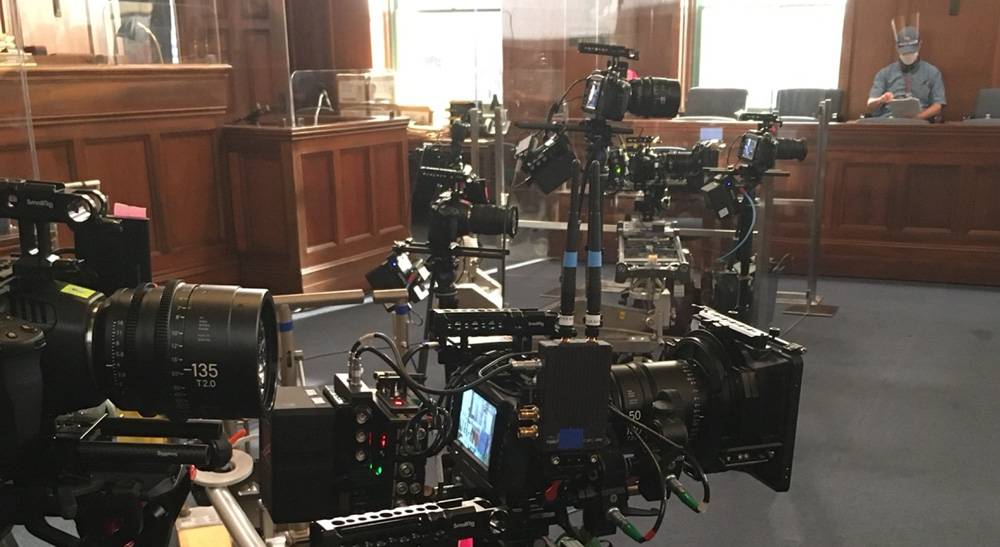 Cinematographers David Harp and Amanda Treyz faced a unique mandate as prep commenced on season two of the series in August of 2020. The pandemic was in full swing, and the idea of shooting a series on set, with actors and crew spending long hours in close proximity simply was not an option.

It was then that Executive Producer Michael Robin suggested using multiple Blackmagic Pocket Cinema Cameras to Harp. Harp had only limited experience with the cameras but had always been impressed by the quality of the images they produced, and he knew it was time to embrace something new. “We had to come up with a system that enabled us to divide the cast and crew into pods, and limit our exposure to one another,” said Harp. “To do this we went from a three or four camera show to a 27 camera show, all with Pocket 6Ks.”

A courthouse drama set in Los Angeles, “All Rise” follows the chaotic, hopeful, and sometimes absurd lives of its judges, prosecutors and public defenders, as they work with bailiffs, clerks and cops to get justice for the people amidst a flawed legal process. While the first season was shot traditionally, season two would be produced very differently, though it was critical that the look of the show remain of the same quality, despite the challenging times. Finding a safe way to continue was important, and both the crew and cast adapted quickly to the new paradigm. “It was surreal to be going to work while most people weren’t leaving their houses,” said Treyz.

The solution was to place Pocket Cinema Camera 6K cameras on a variety of remote PTZ (pan/tilt/zoom) heads, Ronin 2 systems, remote sliders or Steadicam. The remaining cameras, up to 13, were locked off in various positions. “The Pocket 6Ks were affordable enough that we could have multiple bodies,” said Treyz. “We could get wide shots and close ups at the same time.”

The set was filled with cameras on stands, all non operated. “Basically, every angle that could be conceived of as necessary was photographed, usually in two setups,” added Harp.

The added feature of shooting at a high resolution proved to be valuable and gave the filmmakers flexibility in post. “The 6K capture gave us a lot of options,” said Treyz. “We could shoot a medium close up and if the director wanted a closeup, the editor could extract the framing they wanted.” For Harp, the quality of the image was equally pleasing. “One delightful surprise was the images that the 6K cameras are capable of providing. One sees a small camera and assumes that it will not have the overall image quality of a traditional cinema camera. But that would be wrong. The images from the Pocket 6K are fantastic, with great color and amazing richness. I have been delighted with the pictures that we have provided this season.”

With the unique setup, only the dolly grip and the Steadicam operator were required physically on set with the cast. The director, cinematographer and camera assistants were able to step in as needed, reducing the danger of crew and cast forced together, despite rigorous testing. Almost all set lighting and grip work was done from overhead rigging, providing 360 degrees of angles without any equipment visible. While a very different environment than normal, the crew adapted quickly. “The reaction of the crew was one of acceptance,” said Harp. “The presence of Covid threw all the old methods out the window, so everyone pitched in to figure out a new way. I am very proud of the entire crew for the way they waded into this process, and made it work.”

For the cast, Harp believes while it was strange at first, that they came to appreciate the hidden values of the new style. “The cast was at first a bit thrown by the lack of crew, and the wall of cameras, but then became quite enamored of the method,” added Harp. “Fewer setups meant they didn’t have to repeat each scene as many times, which they appreciated.”

Neither Harp nor Treyz are new to Blackmagic Design cameras, but the recent season of “All Rise” brought with it a new understanding of what was possible. “My choice of camera depends on what look I want to achieve and what capabilities I need for the shot,” said Treyz. “I have used Blackmagic cameras in the past for supplementary angles or specialty shots. I’ve found that Blackmagic RAW matches extremely well with other cameras, and because the Blackmagic camera creates such a robust image, it’s versatile enough to match to a lot of different looks.”

Robin, in the end, was pleased with the decision to use the camera. “The new setup kept our cast and crew safe this year, while giving us a fabulous looking show.”

For Harp, after a breaking in period, the new system quickly became the norm, and the images created by the Pocket Cinema Camera 6Ks did not disappoint. “Overall, I am so very impressed with the Blackmagic cameras. I was, frankly, skeptical when this concept was first proposed. I was very concerned that we would miss the cameras that we’d become so comfortable with from the previous season. But the imagery from the Pocket 6K is amazing, and I’m very proud of each episode we created with them.”

Product photos of Blackmagic Pocket Cinema Camera 6K, Blackmagic RAW, as well as all other Blackmagic Design products, are available at www.blackmagicdesign.com/media/images.