GOOD MORNING NEW YORK!  (I love the smell of Javits in the morning!) These lines in remembrance of the legendary comedian Robin Williams – but every bit as fitting for the New York Show of Shows!

Here’s the view Ryan had on the plane enroute to Javits: 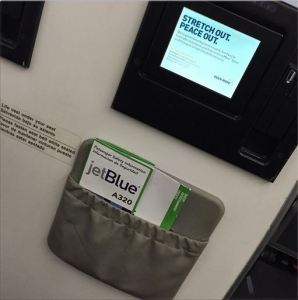 Blackmagic Design – who doesn’t think of top-grade industry-standard equipment without this name popping-in to your mind first?  You just KNOW that they will have the software and hardware that will delight the professionals in the biz as well as those studio wannabees alike!

On tap at the Show will be Blackmagic Design‘s new 12G-SDI products and a comprehensive display of Ultra HD workflows. Check-out the hourly scheduled demos on the latest features of DaVinci Resolve 11 by our featured demonstration artists.

In fact, Blackmagic has created some of the most talked about products in the industry. World famous for their unbeatable codecs, Blackmagic envisioned truly affordable high-end quality editing workstations built upon Blackmagic software and hardware.

Stop by – you definitely will be truly amazed by their “Blackmagic (Design)” !!!

With thousands of colorists relying on DaVinci color correctors,  they have been the industry standard since 1984 and become more popular as time goes on!

DaVinci Resolve 11 includes over 70 new editing features including an amazing new collaborative workflow that permits multiple people to work together on the same timeline at the same time – an incredibly stunning feat in and of itself!

Not only do you get customizable keyboard shortcuts so you can edit quickly and move between applications with ease, the automatic context sensitivity feature determine how you want to trim based on the position of the mouse, eliminating the time in having to switch between tools!

It not only addresses the exacting demands of cinema and TV, the EOS C500 comes with two different forms of 4K origination – either the DCI (SMPTE 2048-1:2011 standard) or the alternative television-based Quad-HD (SMPTE 2036-1:2009 and ITU-R BT.1769 standards) source image formats.

B&H is very proud to be displaying this fine Canon camera and has the perfect place to display this excellent product, which is as much as a workhorse as it is a showpiece!

Collaborating with some of the most respected names in the industry ensures the Cinema EOS C500’s output works perfectly with external digital recording units, portable and master monitors, and on-set DIT systems, Canon has put their all into this phenomenal device. The Cinema EOS C500 delivers flexibility in its 4K and 2K recording, allowing a workflow maximization for production teams.

Another stunning feature incorporated into these cameras is the ACES color management architecture developed by AMPAS. Standardized by SMPTE, ACES improves efficiency among complex color management workflows by supplying uniform color expression via a standardized color space – the kind used during the video production workflow.  ACES popularity has lead to an outpouring of strong demands from professionals working in the fields of motion picture, commercial and television production, so much so that Canon U.S.A., Inc. now offers firmware and application software upgrades for the Cinema EOS C500 , EOS C500 PL, EOS C300, EOS C300 PL and EOS C100 Digital Cameras. 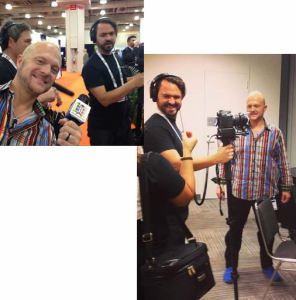 Just the Broadcast Crew (Ryan & Minos, then Minos & Ryan) taking some test-shots before the interviewing begins! (Am I ready for my close-up, Mr. DeMille???)  Yes, I tend to ham-it-up in front of the cameras, but hey – that’s what I’m good at… right? 🙂

Not only is Atomos is known for delivering creative solutions to real world professional production and post production problems, they have one of the coolest websites, too!  The creator of award winning camera-mounted recorders and recording accessories, the Atomos Shogun is the world’s first 4K/HD monitor recorder for creatives that links production to post production in a seamless, affordable and flexible package. Pictures DO NOT do these units justice – you must SEE THEM to really appreciate them!!! 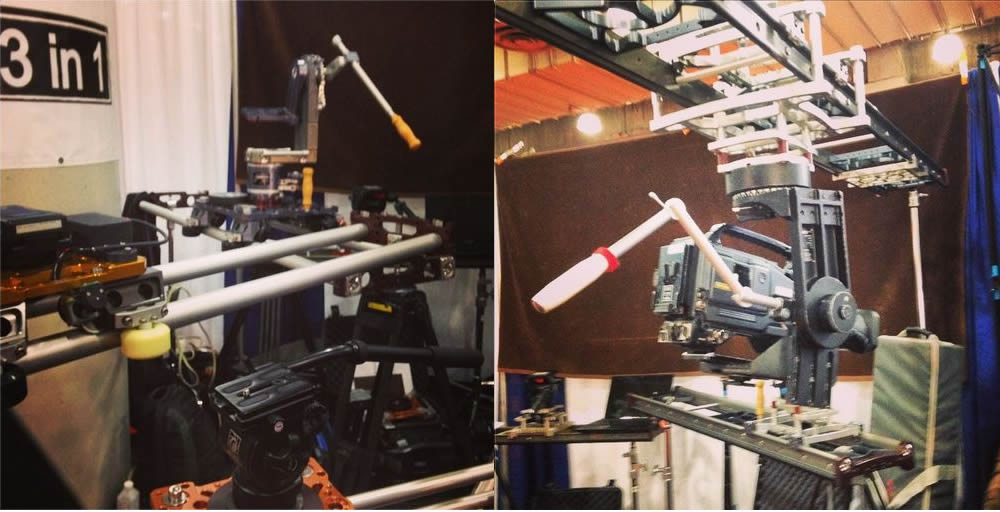 MYT Works’ Camera Dollies & Sliders are truly impressive – and something every cameraman dreams of!  Well, our Minos at Broadcast beat Magazine does, anyways!  I kept having to draw his attention back to the shoot because he kept looking over his shoulder at the sleek designs these devices were sporting!  I have no doubt that he wanted our camera mounted to one of these beauties!  Believe me – I’ll be looking into their product line for use in Broadcast Beat’s own studio (hint, hint)… 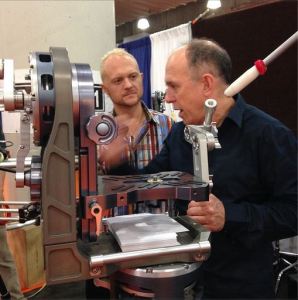 Etienne Sauret showing off MYT Works’ new tripod head – WOW! is it ever NICE!  They are a design, engineering, and manufacturing company based in NYC, but started out as Turn of the Century Pictures, a film production studio that’s been in operation for the past 10 years!  As filmmakers first, they understood what was needed on a shoot and, well, just set forth to make it!

Unhappy with what was available at the time, their  motto: Born Out of Frustration – says it all!

As their website touts: MYT Works is a company created “by filmmakers for filmmakers,” because at the end of the day we would not make something that we ourselves wouldn’t want to use.

Not only built by hand in New York City, each assembly is lightweight, with a heavy load capacity and limitless mounting options, thanks to the state-of-the-art technology used in both the engineering and the manufacturing.  Truly a work of art in and of itself!

And look who I just ran into!  Imagine NAB President Gordon Smith at NAB’s CCW-SATCON Show in New York City!  Although it’s

not as far of a fling from his office in Washington D.C. to get to New York City as it is Las Vegas, he’s here, nonetheless, overseeing the show and ensuring that all who attend are sufficiently thrilled with the technology on parade here on the Show Floor!

CCW serves to draw together buyers and potential customers from and for several combined industries that can all benefit from what the CCW has to present. Broadcasters and their suppliers aren’t the only people you’ll run across here: Media & Military, Government & Enterprise, Technologies and Telco’s, Entertainment executives and Industry integrators all mingle here, all of them drawn together for this tripartite extravaganza.  All of CCW’s major components fit together in a homogenous blend; attendance to one CCW event grants attendance to all three of its core events.

In October of 2013, the CCW had a record year – a 22% increase beyond its former record. In December, NAB purchased CCW and SATCON from JD Events.

Not to be outdone, Panasonic has its new AW-HE130, a pan/tilt/zoom camera sporting newly-designed high-sensitivity, low-noise 1/3” 3-MOS imagers designed for low-light conditions, and featuring other goodies like Power over Ethernet+ (POE+) for easier integration and a multi-stream transmission rate of H.264 HD video and audio (up to 1080/60p at 25Mbps).  The HC3800 HD Studio Camera is equipped with three high-sensitivity, high-quality 2/3-type 2.2-megapixel CCDs, a high-precision 16 bit A/D image processing circuit, and the latest generation 38-bit Digital Signal Processor (DSP) – clocking-in at a mere 8 pounds! 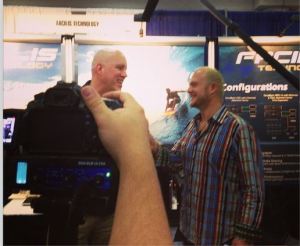 Facilis Technology is a favorite at every industry show, and the CCW/SATCON is no different!  It was good to see him and reminisce about shows past!

What we couldn’t reminisce about was Facilis Technology‘s all-new latest update for its TerraBlock shared storage system for content creation and post production.

“At Facilis, we’re continually working to bring TerraBlock users new features that help expand their creative capabilities while also simplifying day-to-day operations,” said Facilis Technology Vice President Jim McKenna. “TerraBlock Version 6.1 is a reflection of our ongoing efforts, and we look forward to sharing our latest update with the community this week at CCW.”

Aside from having the coolest logo, Decimator Design is featuring the DMON-12S one to twelve Channel Multi-Viewer (with SDI 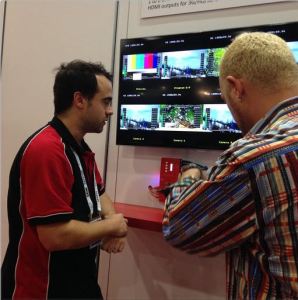 The DMON-12S is a truly portable converter, incorporating their new easy-to-use LCD and button control system, giving you easy access to most of the amazing features without using complicated LED/button control, dip switches or having to carry around a computer to change a simple setting. 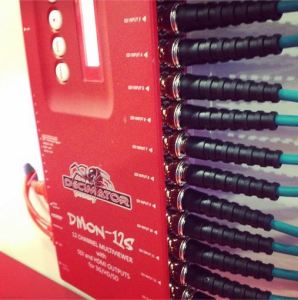 The Decimator is perfect for any application that requires multi-screen viewing with multiple screens (up to 12) and, thanks to its many features and functions, can boast many options that you wouldn’t expect on such a compact device, such as: Selectable output format in both Full-Screen Multi-Viewer mode, Low latency buffering for each input allowing non-synchronous inputs, Linked (3G/HD/SD)-SDI and HDMI outputs, Each quadrant is independent of the others, allowing any 3G/HD/SD format of any frame rate to be displayed simultaneously, Variable aspect ratios per quadrant and In Pass-Through mode the selected input that is passed through to both the (3G/HD/SD)-SDI and HDMI outputs.

“With an unsurpassed level of scalability and flexibility, the FORK suite is an

essential toolbox for anyone working with a non-linear editing system,” said Claudio Lisman, Primestream president and CEO. “The FORK Suite is designed to minimize distraction and keep the artistic process flowing while increasing the bottom line.”

The FORK Production Suite v4.6 is the latest version of Primestream’s celebrated software platform; it manages the automation of even the most intricate of workflows, incorporating new modules, functionality, and integrations into the leading broadcast hardware and software solutions!  FORK v4.6 is the most powerful version of FORK ever released, allowing for new and different configurations  and including major revisions to the primary architecture of FORK 4.5.