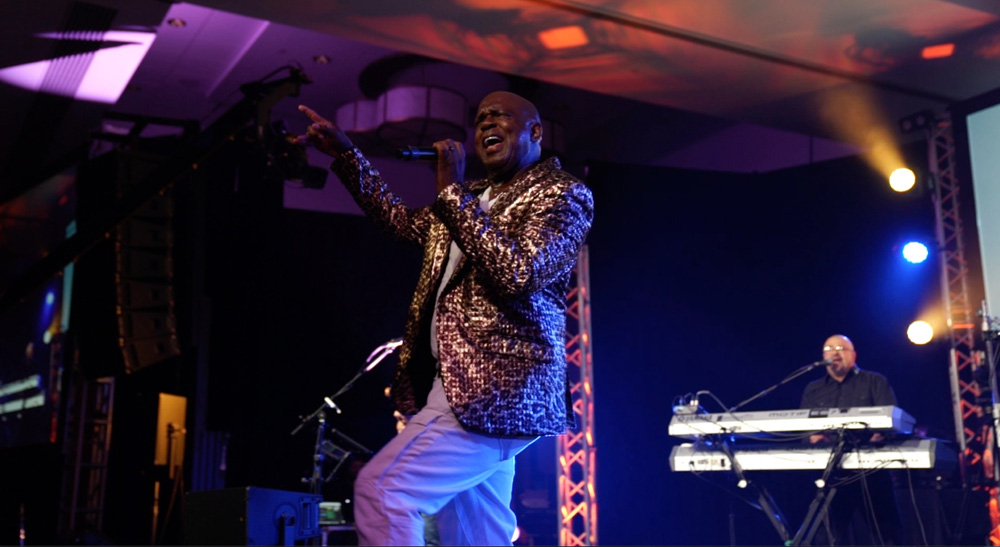 Shubert has been providing video services for St. Jude Children’s Research Hospital events since 2015, and 2022 saw him producing several fundraisers such as the Warburton Celebrity Golf Tournament and the Rahm Celebrity Golf Tournament, which raised a combined $5.5 million. Both events featured one of a kind music experiences each night, including performances by Alice Cooper, Phil Vassar, Mike Mills of R.E.M, Al Paris of Kool and the Gang, Jeff Baxter formerly of Steely Dan and The Doobie Brothers, and more.

For each event, a Blackmagic URSA Mini Pro 4.6K G2 digital film camera was fitted on a 24’ jib, while four URSA Broadcast G2s were set up around the stage and in the back for reversals, side shots, and shots from the front of the house. The camera feeds were brought into a Smart Videohub 40×40 router and then sent to an ATEM 4 M/E Broadcast Studio 4K live production switcher paired with an ATEM 2 M/E Advanced Panel for control. At the Warburton event, the program feed was routed to three large LED video walls, and the Rahm event used four 12K laser projectors, each paired with two M/Es from the ATEM 4 M/E Broadcast Studio 4K, to project the program feed to four screens around the venue. Each event also had five HyperDeck Studio 4K Pros to record the program feed and camera ISO feeds.

“This year our video for the events looked better than ever,” said Shubert. “Using the URSA Mini Pro 4.6K G2 and URSA Broadcast G2 cameras with Ultra HD Canon lenses increased our production value immensely. We also incorporated the Zeiss DigiPrime lens set from 3.9 to 70mm. I’ve seen Ultra HD being done in cinema work, but to be able to use it in a live entertainment atmosphere, combined with an AntigravityCam steady cam system that we used, the footage looked incredible.”

Shubert also appreciated the HyperDeck Studio 4K Pros’ reliability, as well as having H.264 and H.265 recording ability. He noted, “Recording H.264 in 1080p and H.265 in 4K is key for us. At the Warburton event, we used the HyperDeck Studio 4K Pros in 1080p59.94. Then we used the flypack in 4K for a huge event at Lucas Oil Stadium with Jennifer Hudson for 7,000 people, feeding two 4K laser projectors. Afterward, we switched back to 1080p for the Rahm fundraiser, and the HyperDecks performed seamlessly. The images were incredible, not only those going to projection but also to records with the Ultra HD lensing. The client was able to walk away with the footage since we doubled up the recording with the USB-C output and the SSDs.”

He concluded, “We have also found the new HyperDecks to be incredibly portable, and the overall design of our Blackmagic system to be so efficient. With our setup, we are ready for the camera input in about 10 minutes. As we have grown and adapted over the years, and as we’ve added more of the latest Blackmagic Design gear, our system gets better and better. Not only does this help us to serve our clients better, but it allows us to be able to give back and help raise money for great causes like St. Jude.”