Virtually everyone in the video or audio business uses headphones. In the field, headphones are the way the sound operator ensures the acquisition of problem-free audio. In the edit bay, headphones are often used to critically mix audio. Many consumers, who are the audience for video, listen to the final program on headphones.

Headphones are now a staple of our audio-video universe. Though most of us use them daily, few actually match the right headphones to the job at hand. Paying attention to the type of headphones being used for a task, can result in much higher quality audio.

Headphones are one of the oldest categories of audio equipment. They were first used in the earpiece of the telephone receivers. In the 1890’s, a crude headphone was manufactured by a British company called Electrophone. It allowed users to connect into live feeds of performances at theaters and opera houses across London.

In 1891, Ernest Mercadier, a French engineer, patented the first in-ear headphones. His patent was for “improvements in telephone receivers…which shall be light enough to be carried while in use on the head of the operator.”

Sixteen years later, Nathaniel Baldwin, an inventor in Utah, built a more sensitive headset in his home kitchen due to his inability to hear Mormon sermons during a church service. The prototype headset was tested by the U.S. Navy and resulted in an order of 100 units from Baldwin for military use.

Headphones all function the same way. A pair of miniature loudspeaker drivers are worn on or around the ears of the user. The headphone’s transducers convert an electrical signal to a corresponding acoustic sound for the human ears.

Until the 1980s, most headphones were large and bulky contraptions. In 1979, came a major design change. The Sony Walkman was born after Sony’s founder, Akio Morita, came up with an idea to make headphones much smaller and lighter for portable music listening.

After a breakneck R&D cycle of only four months, Kihara and Sony’s engineers created the very light weight, compact and reliable Walkman with a new headphone design that could sell for about $150 in 1979 dollars.

This was the beginning of the modern mobile music revolution and the rebirth of a new generation of headphones. As a result of the “Walkman effect,” headphones started to be used in public places all over the world. Sony’s invention opened the door to portable streaming music, podcasting and even video-on-the-go. 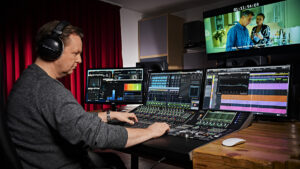 A new era of headphone design was launched, for consumers and pros alike. Lightweight headphones of professional quality were developed for audio engineers who mixed sound for video production, audio recording and post-production.

Today, we’re in a renaissance of headphones. There are now many types — ranging from tiny in-ear canal phones to large, self-amplified ear speakers.

In the professional headphone market, there are a range of choices, each designed for a specific task.

In this article, we will focus on headphones suitable for use in video production. Many companies make a complete line of similarly priced headphones that use the same basic technology but differ by feature set for specific applications.

As an example, take headsets based on dynamic transducer technology with a 40mm driver. All the designs weigh about the same — about 300 grams — and spec a frequency response of 5Hz to 35kHz, far beyond the capabilities of human hearing.

The major difference is whether the headphones are an closed back, open back or a semi-open design. Each type is targeted for a specific purpose.

Closed back headphones, which form a seal over the ears, isolate the listener from the background environment. These are best used to monitor audio on noisy production locations. With this design, lower frequencies are enhanced.

Closed back headsets are not as accurate as open back models. They allow the concentration by the user when other activity is going on around them.

Open back headphones allow users to hear the background environment. They work well in quiet edit bays and recording studios and offer an accurate, open sound. But if background noise develops, open back phones can become distracting and make audio difficult to hear.

Semi-closed headphones are a combination of open and closed back headphones. These are best selected for use in a specific environment where they work.

Ohm level is another important factor in selecting pro headphones. Most consumer headsets are low impedance, while 250 ohms is more suitable for professional models.

The reason for the ohm difference is kind of device driving the headphones. When listening to small electronics, such as a smartphone or portable music player, lower ohm models work best. A lower ohm count means the headphones can operate louder with the weaker amplifiers in these devices.

Devices for professional use tend to be about 250 ohms. When using higher impedance headphones, the audio is cleaner, more transparent, has deeper base and is more spacious. The tradeoff is the user needs a powerful headphone amplifier with low distortion and ultra-low output impedance to drive them. An amplifier also improves bass and has a fast transient response.

When working in a quiet studio environment with professional-level headphone amplification, open back designs with 250 ohms are the best choice. When working on location and having access to a good amplifier, 250 ohm closed back headsets are best. Without the amp, use good quality lower impedance closed back models.

Another major factor in choosing pro headphones is comfort — since you will be wearing the phones for long hours. If the phones exert pressure on your head, it can give you a headache after wearing them awhile. This is why it is best to try on pro headphones and make sure they fit comfortably  before purchasing them.

In recent years, there are many new models, including earbuds, in-ear headphones and super-aural headphones that sit on the ear. There are various kinds of transducers, including moving coil, electrostatic, electret, planar magnetic, balanced armature, thermoacoustic and others.

Bluetooth wireless headphones are now popular and some models offer ambient noise reduction that can be useful in very noisy environments. Prices of headsets can range from $100 to thousands of dollars, depending on the technology and type.

For video sound applications, it is best to use wired models of medium impedance headphones (100 – 250 ohms). Such headphones will deliver enough volume on the majority of audio interfaces. Though Bluetooth models are getting better, they are rarely used by professional sound operators.

Professional videographers typically use headphones costing under $500, which make up the sweet spot for balancing functionality, comfort and cost. Since hearing is subjective, there is no single right choice of professional headphones. The best way to choose is to listen to several models in your price range and pick the one that sounds best and fits your application.