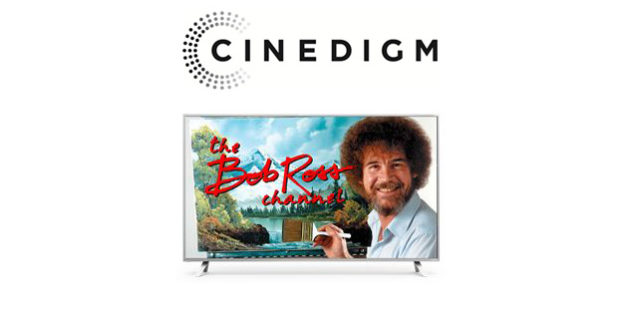 Cinedigm (NASDAQ: CIDM) announced today a partnership with Bob Ross, Inc., granting Cinedigm exclusive rights to distribute an all-new art channel featuring the fan-favorite series The Joy of Painting. The Bob Ross Channel is slated to launch on Samsung April 16, 2020, on Roku May 18, 2020 and will be available worldwide for linear, AVOD and SVOD platforms on connected TVs, digital set-top boxes, media-streaming devices, and web-based and online OTT services in the coming months.

For 31 seasons, beloved painter, art instructor, and TV host Bob Ross captivated millions of viewers around the globe with his EMMY-winning hit series The Joy of Painting, which first launched on public television stations in the United States, from 1983 to 1994, and has continued to broadcast on more than 150 public TV channels and Create TV.  Distributed by APT Worldwide, Ross’ programs are also available in many countries ranging from the UK to Thailand, on airline flights and other platforms.  Ross demonstrates his “wet-on-wet” technique, which eliminates the need for each layer of paint to dry. In real-time, Ross creates tranquil natural scenes, including his trademark “happy” clouds, cascading waterfalls, snow-covered forests, serene lakes and distant mountain summits. Many of Bob’s faithful viewers are not painters at all. They are relaxing and unwinding with Bob’s gentle manner and encouraging words, captivated by the magic taking place on the canvas. Ross is well-known for his positive thinking such as, “we don’t make mistakes.  We have happy accidents.”  Though Ross passed away in 1995, his legacy lives on as the series continues to enthrall and inspire new generations of viewers — amassing a combined total of more than 5.5 million social media followers, as well as 5.6 million unique views on Twitch, nearly one million hours of The Joy of Painting consumed on Hulu, and an hour-long YouTube special that attracted over 2.5 million viewers.

The new Bob Ross Channel will put the spotlight on the series’ memorable moments and incredible paintings, featuring approximately 380 classic episodes and delivering hours of quality entertainment that is enjoyable for the whole family. As part of Cinedigm’s agreement with Bob Ross, Inc., Cinedigm will also produce and distribute special messages of support for public television on the channel, as well as spots highlighting official Bob Ross painting products, and Bob Ross Certified Instructors.

“Cinedigm is proud to partner with Bob Ross, Inc. as the exclusive distributor of the all-new Bob Ross Channel,” said Erick Opeka, President of Cinedigm Digital Networks. “Bob Ross has emerged as a major pop culture icon in recent years, and The Joy of Painting has, arguably, never been more popular as a result, as evidenced by the ever-growing following and tremendous view count that Ross has garnered on social media platforms. With this channel, viewers can easily access Ross’ classic episodes in one convenient place—allowing loyal fans to relive his most memorable moments, while introducing Ross and his groundbreaking series to a whole new generation of art enthusiasts.”

Joan Kowalski, President of Bob Ross, Inc. adds, “If you know anything about our beloved Bob Ross, then you know how much he would have loved being a friend in so many more homes now, painting his happy landscapes for all the world to enjoy.”

ABOUT CINEDIGM
Since inception, Cinedigm (NASDAQ: CIDM) has been a leader at the forefront of the digital transformation of content distribution. Adapting to the rapidly transforming business needs of today’s entertainment landscape, Cinedigm remains a change-centric player focused on providing content, channels and services to the world’s largest media, technology and retail companies. Cinedigm’s Content and Networks groups provide original and aggregated programming, channels and services that entertain consumers globally across hundreds of millions of devices. For more information, visit www.cinedigm.com/.

ABOUT BOB ROSS, INC.
Bob Ross Incorporated was formed in 1982 by Annette and Walt Kowalski, and Bob Ross and his wife Jane. Together they changed the face of how-to programming on public television and turned the Joy of Painting into a mainstream phenomenon supported by a unique line of Bob Ross painting products, certified instructors and whimsical collectibles for painters and non-painters alike. BRI continues today uninterrupted and as strong an organization as ever, with just a dozen devoted employees. For more information, visit www.bobross.com