LAS VEGAS, NAB Show 2017, Booth SL11116 – In the broadcast world, “big data” is literally that, and much more. According to Cinegy Head of Product Management Lewis Kirkaldie, who spoke at Cinegy’s annual Techcon conference in Munich, “It should more commonly be called ‘really big data.’”

Contemporary CPUs were not, and are not, designed to handle the volumes required to transport multiple high quality video, audio and data streams, which require thousands of computational processes to be handled simultaneously.

Graphical processing units (GPUs), however, are designed to handle such loads, chief among those being the high-end range of graphics cards from GPU inventor, NVIDIA. Cinegy broadcast workflow software has run on NVIDIA GPUs for years, recently increasing support for HEVC, H.264, and even 8K encoding for its Cinegy Air PRO playout bundle, Cinegy Multiviewer, and Cinegy Capture.

According to Kirkaldie, “As we continue to progress in UHD and Ultra UHD, really big data rapidly becomes really, really big, and the only way to handle such data is by GPU cards specifically designed from the start to process more and more data in real time. That’s why, to date, the majority of GPUs in broadcast and production applications are NVIDIA.”

Based largely on the use of the high-end NVIDIA® Quadro® M6000 professional GPU, Cinegy’s Air PRO Bundle easily supports high frame rate Ultra HD formats (50/60p) and integrated HEVC stream encoding because of the ability to offload HEVC and H.264 stream encoding to the NVIDIA GPU.

Kirkaldie added, “NVIDIA has historically paid close attention to its developer community, of which we are highly active. NVIDIA has used information and feedback from that community to improve their SDKs with genuinely useful features and tools. It has enabled us to continually improve our product offering and feature sets, now including our Air PRO Bundle, Multiviewer, and Capture products.”

Specifically, Cinegy Air PRO Bundle playout software with an NVIDIA GPU card can generate multiple, live, and simultaneous HEVC and H.264 streams from a single box or even a virtual environment.

Cinegy’s soon-to-be released Cinegy Multiviewer 12 will support H.264 and HEVC stream decoding as well as encoding, enabling up to 24 HD H.264 streams to be decoded on a single card, including support for multiple cards if required. 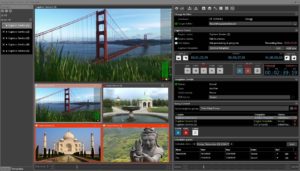