Chaperone, the 2022 Sundance Film Festival nominee for the Short Film Grand Jury Prize, is a 16-minute dark drama beautifully shot by cinematographer Jordan T. Parrott, with a final moment that “brings Chaperone’s story to a somber conclusion – one that manages to touch at the emotions, despite sparing use of dialogue, sound or musical cues,” as reviewed by Culture Fix.

Cooke Optics Anamorphic/i is Parrott’s ‘go-to’ anamorphic choice. “I’ve used Cooke’s Anamorphics for more than five years. Cooke combines a certain translucency along with a beautiful falloff and bokeh without being distracting. They’re a gorgeous blend of modern glass and Anamorphic character that holds up particularly well when used wide open at T2.3. The ability to be able to open up to such a wide stop was very important for Chaperone as I shot a lot of scenes at 2.3 and 2.8.” 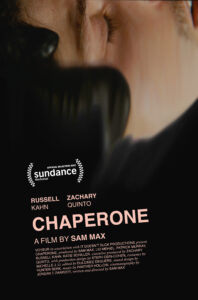 Chaperone, from writer/director Sam Max, is the story of an unnamed figure (played by Zachary Quinto) that picks up a young man (played by Russell Kahn) in his car. As the two drive together, and settle into an austere rental house in the country, the details of their arrangement become guttingly clear.

“I interviewed with Sam, got the script, and loved it,” said Parrott. “My style suited the story very well. I showed them a previous film that I had at SXSW in 2021. Two days later, I got the call to join the film. We had a great collaboration. Much like myself, Sam is very methodical with lots of prep and discussion about how the characters are feeling, and how they explore the space. Sam has a strong sense of what they wanted visually, with a keen eye for spatial awareness between the talent and the camera.

Early on, Max and Parrott were thinking of shooting on 16mm film but decided to go digital with Cooke Anamorphic/i lenses mounted on an ARRI ALEXA Mini shooting at 2.8k at a 2.66 aspect ratio, which was also the release aspect ratio. The lenses and camera were provided by Abelcine New York.

“I showed Sam some of my previous work with the Mini, my ‘go to’ camera’ and Cooke Anamorphics,” said Parrott. “They really liked the look of that work.” 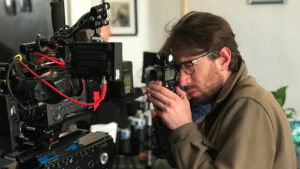 Parrott’s Anamorphic/i kit for Chaperone included the 25mm, 32mm, 40mm, 50mm, 75mm, and 100mm. “They’re so linear between all the lenses. I didn’t have a traditional ‘go-to’ lens – I used whatever fit the scene and aesthetic. But I used the 50mm and 75mm the most.” For the confined space of the interior of an SUV, Parrott used a 40mm for inside shots and a 100mm for the passenger side-view mirror shots of Kahn’s character, shot by camera operator Megaera Stephens. “For those mirror shots, Megaera used her body to give the camera the right amount of tension and support for a nice and stable shot.”

Parrott used natural daylight for day interiors and exteriors with a bit of negative fill and had a simple lighting kit for the night interiors with Helios Tubes, a Skypanel S60, and Astera NYX Bulbs in the practicals.

“One of my primary goals, after reading the script and during prep, was that I wanted a weight and solitude to the composition in relation to the two characters,” explained Parrott. “There’s very little camera movement – only one dolly shot – Letting the actors carry the power of their performance.” 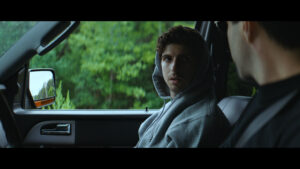 The last shot in Chaperone, the one called out by Culture Fix, is one where the Cooke Anamorphic/i attributes particularly stood out. “That last shot is really beautiful,” said Parrott. “The falloff behind Zachary’s character, with the 100mm, encapsulated the tone of the film.” 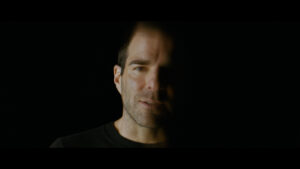