Wayne, N.J. – As a Director of Photography and producer with a degree in studio art and previous career as a sculptor, Timur Civan takes pride in telling an artistic story through his camera work. His production company Tstop Cinema LLC focuses on high-end commercial and feature film work, ranging from fashion and technology projects, to cooking, and Sesame Street promos. Over the last few years, one piece of equipment Timur has relied upon is the FUJINON PL 19-90mm Cabrio lens Timur Civan Cabrio Use-1(ZK4.7×19.) Most recently, he used it to shoot a commercial for FILA sneakers and commercials for the Home Shopping Network (HSN).

When FUJIFILM Optical Devices introduced the Cabrio 19-90 T2.9 lens in 2012, Timur was one of its first customers. “I’d just sold my previous lens because it was expensive and was not 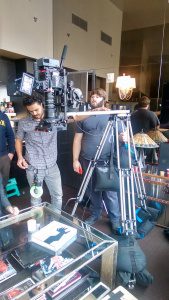 renting well, and was in the market for a new one,” he explained. “At first I just thought that the Cabrio would be a good rental item, which it definitely is. What I didn’t expect was its high optical quality. Zoom lenses with such a long focal range can sometimes lack in image quality. But in this case, FUJIFILM did an amazing job with its image quality. The optics on the lens are just beautiful.”

Offering the longest focal range available in a lightweight zoom, the FUJINON 19-90 Cabrio weighs in at only 2.85kg, including its Timur Civan Cabrio Use-2servo motors. Its compactness is something that Timur particularly appreciates. One feature that Timur is surprised he finds so valuable is the detachable servo drive. The exclusive detachable servo drive unit makes the lens suitable for use as a standard PL lens or as an ENG-Style lens. For a recent Home Shopping Network (HSN) fall fashion commercial, Timur relied exclusively on his FUJINON 19-90 lens mounted on a RED EPIC DRAGON camera for the nearly 15 hours of footage he shot.

“We were able to shoot through a variety of setups in the day using only the Cabrio. It saved us a lot of time and energy.”
On another recent shoot, this time a nighttime production for FILA’s TMNT Crossover Shoe, Timur again shot with the FUJINON Cabrio lens on a RED EPIC DRAGON. “The FUJINON lens covers 6K on the RED camera, so it produced full sharpness and breadth at the center. The lens is still sharp, even at the edges of the frame, with no soft corners. The Cabrio has a certain clarity that’s hard to explain.”

Citing the FUJINON Premier Series 18-85mm T2.0 zooms as his all-time favorite lens, Timur describes it on his website as “legendary” and “practically a miracle of modern optics.”

About Fujifilm
FUJIFILM North America Corporation, a marketing subsidiary of FUJIFILM Holdings America Corporation consists of four operating divisions and one subsidiary company. The Imaging Division provides consumer and commercial photographic products and services, including: photographic paper; digital printing equipment, along with service and support; personalized photo products; film; and one-time-use cameras; and also markets motion picture archival film and on-set color management solutions to the motion picture, broadcast and production industries. The Electronic Imaging Division markets consumer digital cameras, and the Graphic Systems Division supplies products and services to the graphic printing industry. The Optical Devices Division provides optical lenses for the broadcast, cinematography, closed circuit television, videography and industrial markets, and also markets binoculars. FUJIFILM Canada Inc. sells and markets a range of Fujifilm products and services in Canada. For more information, please visit www.fujifilmusa.com/northamerica, go to www.twitter.com/fujifilmus to follow Fujifilm on Twitter, or go to www.facebook.com/FujifilmNorthAmerica to Like Fujifilm on Facebook. To receive news and information direct from Fujifilm via RSS, subscribe at www.fujifilmusa.com/rss.
FUJIFILM Holdings Corporation, Tokyo, Japan brings continuous innovation and leading-edge products to a broad spectrum of industries, including: healthcare, with medical systems, pharmaceuticals and cosmetics; graphic systems; highly functional materials, such as flat panel display materials; optical devices, such as broadcast and cinema lenses; digital imaging; and document products. These are based on a vast portfolio of chemical, mechanical, optical, electronic, software and production technologies. In the year ended March 31, 2014, the company had global revenues of $23.9 billion, at an exchange rate of 102 yen to the dollar. Fujifilm is committed to environmental stewardship and good corporate citizenship. For more information, please visit: www.fujifilmholdings.com.