LAS VEGAS, FEBRUARY 27, 2017 — Cineo Lighting, a leader in the production of lighting systems for the motion picture, television and photography industries, will debut its new MavX™ color-tunable mid-power soft light at NAB 2017 (Booth C9945). Built on the award-winning Cineo Maverick™ line, the MavX provides all the color rendering and output benefits of Remote Phosphor Technology (RPT), while offering the ability to dynamically color tune from 2700K to 6500K, with accurate presets at 3200K, 4300K and 5600K. 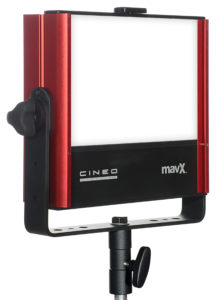 The MavX uses passive thermal management for soundless operation, delivering a volume of light equal to a traditional 1K soft source with no color shift or flicker at any output level. It is designed for small studio and portable applications and features the optimized output needed for film, video and still photography. MavX supports Cineo’s photo-accurate dimming, which matches the dimming curve to camera stops. Local control is simple and intuitive, complimented by both 5-pin wired and wireless DMX control built-in. 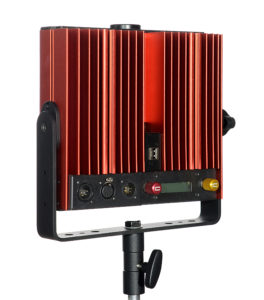 “Cineo’s RPT has quickly made its mark in the industry and we are happy to enhance our Maverick line with the color-tunable MavX,” says Rich Pierceall, CEO, Cineo Lighting. “We invite all expo attendees to visit the Cineo booth at NAB to observe the clear quality of all Cineo lighting systems.”

For studio applications, MavX delivers up to 8,000 lumens from a lightweight, compact package — perfect for lighting broad areas where grid height is challenging. The MavX is also ideal as a portable, battery-powered soft source. Cineo’s SmartPower™ technology provides consistent light output during battery operation, regardless of the charge state of the battery. MavX also protects a battery fleet by providing adjustment to the fixture’s current draw to match the output capability of the batteries.

Other features of the MavX include 150-degree light spread; silent, passive cooling and built-in LumenRadio™ wireless DMX control. The included 80/20 slots provide for maximum mounting flexibility, as well as easy removal of the yoke.