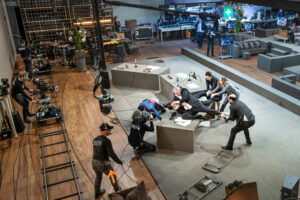 ITA, the leading theatre company in Holland and a global hub for showcasing the diversity of Dutch performing arts, introduced live streaming in the fall of 2020 through its project “ITALive.” What sets their approach apart is ITA’s use of multi-camera set-ups to show audiences all aspects of the performance, including the technology in use and the communications occurring in real-time between actors and crew, for a true behind-the-scenes experience.

The ITA crew is relying on Clear-Com Eclipse and FreeSpeak II digital wireless intercom systems, which were expanded to include five HelixNet desktop stations and five HelixNet beltpacks – resulting in a flexible and highly modular system comprised of 38 total user stations.

“The new system is designed for optimal communications,” said Frans van Houten, Ampco Flashlight’s Clear-Com specialist. “Every station can be programmed and customized to meet the specifications of each user’s role, group and position.”

The modularity of the Clear-Com systems allows them to be scaled to each production’s unique requirements, including creating and defining greater numbers of roles. The ITA crews typically using the Clear-Com systems include audio, lighting, the director, theater stage manager, video and camera operators, props and load-in/out crews, and since the pandemic, the streaming team.

With the high visibility of its performances and performers and its expanded schedule of events, ITA needed a new wireless communications system that would meet its production requirements today, as well as “future-proof” them for years to come. As audiences continue their return to theaters, ITA plans to maintain its live streaming efforts to reach global audiences of theatergoers and provide a perfect complement to the “live experience.”

“Thanks to the flexibility and reliability of the Clear-Com systems we were able to upgrade our system and make it work flawlessly in this complicated broadcast setup,” said Erwin Sterk, head of the sound department for ITA. “The result is a series of unique theatre performances made up by the leading teams of actors and crews in the world,” he continued. “The ITALive platform not only brings theatre to audiences all over the world, but it also enables the viewer to dive into the story and get a view behind-the-scenes, a world that usually remains hidden to audiences.”

ITA was formed in early 2018 by merging the Netherlands’ leading theater venue, Amsterdam Stadsschouwburg, and one of Holland’s major groups of performing artists and actors, and Toneelgroep Amsterdam. The company’s theater is located in the heart of Amsterdam’s cultural district and is home to its own ensemble as well as international troupes of visiting actors and artists from around the world.