Zulu
THE BEAT:
Home » Featured » Clear-Com and University of Montevallo Team Give Students a Lesson in IP-Based Intercom Technology 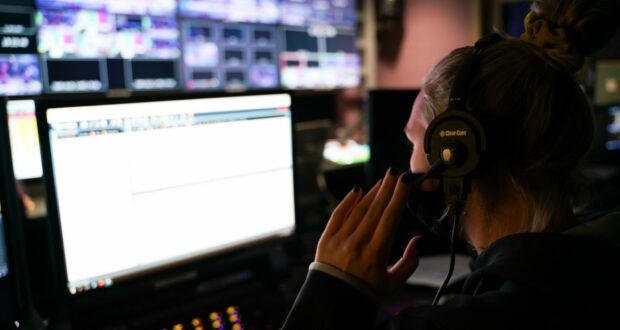 Clear-Com® is giving Mass Communications students at the University of Montevallo an education in the IP-based intercom technologies used in today’s professional production environments. 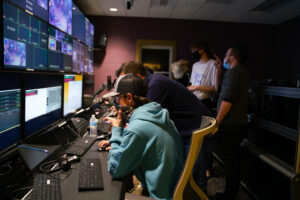 “In TV production, you’ve got to be hands-on,” said Jay Cofield, Professor. “There’s no way around it.”

Throughout the department’s control room and studios, the team now uses a mix of older Clear-Com systems (such as the Concert multi-user Intercom-over-IP and conferencing solution) combined with the newer Eclipse HX system integrated with Station-IC and Agent-IC.

The university’s new studio opened in 2017 and as the program’s curriculum expanded to keep pace with the broadcast industry’s rapid production developments, Cofield and the department recognized the need to step up every aspect of its technology offerings, including intercoms.

“Until 2017, we were mostly single channel, with everybody crowded on Channel A,” he said. “It was a matter of pushing a button and trying to talk over somebody. Now, having the ability to assign channels for private or targeted conversations is a night and day change. The students are able to see first-hand how comms are really handled in a professional production environment.”

When it comes to intercom on a shoot or event, channels are typically allocated for a faculty supervisor, a director, producers, associate producer, graphics, teleprompter, an ENG shader or a technical director depending on the production’s needs—now these roles can be managed using Agent-IC and the new Station-IC desktop client.

Station-IC is one of the latest product releases from Clear-Com. Through a computer running MacOS or Windows operating systems, users can connect natively to a central intercom system hosting such key services as audio and control, panels, beltpacks, or even endpoints from other intercom systems.

“Our Eclipse is tied into our Midas Pro-X audio console and our Ross Ultrix router,” Cofield said. “That configuration, together with Agent-IC, makes doing remotes around campus easier.

For remote productions, faculty will give a remote engineer on-location one of its four Agent-IC licenses to be able to talk back to the control room and send return audio. The team will use a tie from the Eclipse system into the Ultrix to record party lines so students can hear what they sound like on comms or listen to someone giving show directions – another way for them to experience how communications functions are handled on a set or in a studio.

“With our old system, we were tied to the studio,” Cofield said. “We didn’t really have the ability to go out and do anything remote. Now, we can set up a remote anywhere that has Wi-Fi with Agent-IC and have instant intercom. As a faculty member and a producer, I can monitor all student communications and switch quickly to any channel to answer questions or do troubleshooting. It’s super flexible and life-changing to be able to do that.”

The department’s enhanced comms capabilities also serve as a valuable teaching and instructional aide. “From the perspective of a teaching institution, the ability to record the PLs quickly and easily lets me go back and tell the director/professor to emphasize certain techniques more to a class or to even point out when a student producer really performed well on an assignment and made the production come off much smoother.”

Looking ahead, Cofield is confident the school’s current comms configuration is capable enough to take the department well into the future while also providing a unique competitive advantage in attracting students who are looking for real-world experience and modern technology.

“There aren’t many programs like this for undergrads, especially here in the Southeast, and we’re continually growing our program,” he said.

The school’s vision for its Mass Communications department was to have it be a campus communication hub, “not only allowing remote productions, but also connecting classrooms and other learning spaces across campus,” Cofield said. “What I wanted most of all was industry-standard technology to give us the highest levels of flexibility and capabilities for our budget, and that’s what we get with Clear-Com.”