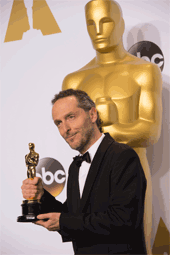 Codex (www.codexdigital.com) congratulates Emmanuel ‘Chivo’ Lubezki AMC ASC on receiving the 2015 Best Cinematography Awards at the Oscar, BAFTA and American Society of Cinematographers (ASC) awards ceremonies for his work on director Alejandro González Iñárritu’s Birdman or (The Unexpected Virtue Of Ignorance), which employed Codex recording technology at the heart of its camera-to-post workflow.

This stellar success follows Lubezki’s 2014 achievement, when he was awarded the same trio of prestigious accolades for his work on Alfonso Cuaron’s ground-breaking production of Gravity, which also harnessed Codex technology. Lubezki is the first cinematographer ever to have made this triple sweep of Oscar, BAFTA and ASC Awards two years in a row.

“Chivo’s achievements in cinematography are truly exceptional and rightly rewarded,” said Marc Dando, managing director of Codex. “Birdman and Gravity are wonderful, ground-breaking movies, powerfully staged, with adventurous cinematography at the cutting-edge of visual innovation. The Codex team extend massive thanks to Chivo and his crews for bringing Codex to the heart of the camera-to-post workflows on both of these epic movies, and send wholehearted congratulations to him on his historic trio of wins both this year and last year.”

Codex recording and workflow technology has been used on hundreds of motion picture productions worldwide. Forthcoming releases to rely on Codex include: In The Heart Of The Sea, The Fantastic Four, Pan, Ant-Man, Terminator:Genisys, The Man From U.N.C.L.E. and Point Break.

Image Credit: Emmanuel Lubezki AMC ASC poses backstage with the Oscar® for Achievement in cinematography, for work on “Birdman or (The Unexpected Virtue of Ignorance)” during the live ABC Telecast of The 87th Oscars® at the Dolby® Theatre in Hollywood, CA on Sunday, February 22, 2015. Photo by Aaron Poole/©A.M.P.A.S..