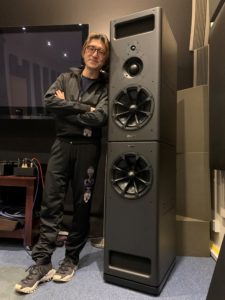 No matter how old you are, it is always lovely when something excites you enough to feel like a child again – and that, says Youki Yamamoto, is exactly how he felt the first time he heard PMC monitors in his own studio.

For nearly two decades the renowned musician and composer and orchestrator has had a long time (15 year) residence at Pinewood Studios where he creates his own music as well as other compositions for films and computer games. He is also equally at home in Katara Studios, Doha, which is where he first had the idea of investing in a pair of PMC monitors for his own facility.

“I used PMC monitors 20 years ago at Metropolis and I thought they were amazing, even though I didn’t know what they were,” he explains. “More recently, when I started working at Katara, I realised how much I liked mixing on their big BB5 surround system, so I started looking for something smaller for my own room.”

Initially Yamamoto tried PMC IB2 XBD-A monitors with Class D amplification, but eventually chose a passive MB2 system with a separate Class A Bryston amp. “It’s a matter of personal taste,” he explains. “The IB2 system was great and probably ‘greener’ because it uses less electricity, and it was perfect when I recorded vocals, but I simply thought I might prefer the sound of the passive MB2 with volt driver system in my room because it was more comfortable around the 200 – 2,500 Hz area, and especially for orchestral work. I thought this could be the most versatile speaker for any kind of music. I get all the lovely clarity and detail that PMC delivers, but don’t get tired listening all day and the sound is so beautiful that I find it hard to leave the studio – I just want to stay in there and keep working. It is almost like being with your first ever girlfriend!”

Yamamoto’s studio is housed in a converted theatre at Pinewood and is equipped with a vintage neve 5315 console, Logic Pro, Pro Tools and Prism Sound ADA-8XR conversion. Over the years he has worked on numerous scores, and an orchestrator and programmer for films such as Never Let Me Go, Belle, One Day Paddington 2 and Turkish film Meryem, for which he won the Antalya Golden Orange Film Festival award for Best Music. He is currently working on music for various computer games including Final Fantasy series.

“Before I bought my PMC monitors, I was looking for something that would motivate me to work on my own music again, as well as the projects I do for my clients,” he says. “In that respect they have been a huge success because as soon as I heard them, I knew I’d found what I was looking for, or what I shouldn’t do. My only concern now is what am I going to do if I find myself in an environment without PMC!”