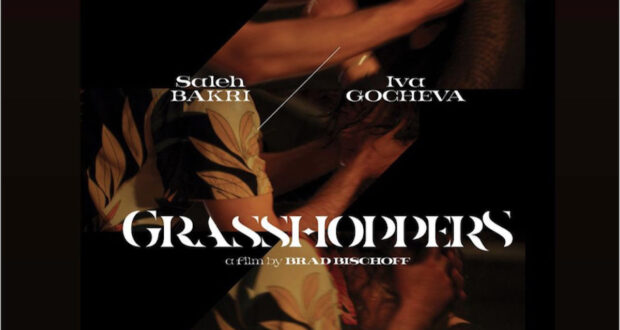 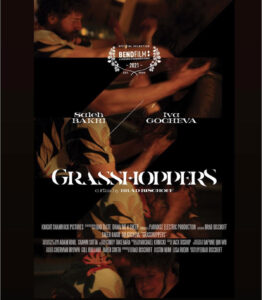 Bischoff called on Adam Robl and Shawn Sutta to compose a score with the depth and texture that brings a cinematic elegance to the film.The grassroots project relied heavily on Chicago’s filmmaking community. Almost the entire crew and supporting cast  draws from the city’s pool of talent.

‘Grasshoppers’ is set in a Midwestern gated community that’s all but deserted by its snowbird residents.  It opens as a couple, Nijm and Irina hatch a plan to ditch work and visit every house in the neighborhood. With each visit, another drink is poured, and startling revelations of their relationship are revealed.

“The opening music is a carefully calculated ‘theme.’ The cue echoes the couple’s mood as they start the day with unbridled 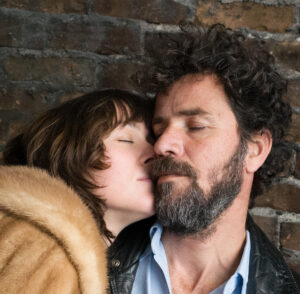 exuberance about their future.  There’s  just the slightest foreshadowing hinting that  things are not as they seem,” says Sutta.  “The soundtrack begins with the rich tones of a refined piano-driven, classically orchestral sound. Textures created by guitars and synthesizers add a modern feel to the the piece.”

Robl and Sutta composed parts for the piano, violin, viola, cello, and double bass that create the foundation of the score. A mellotron creates the sound of a woodwind section.  The vintage instrument contains recordings of flutes on mechanical tapes inside a keyboard. Played by Robl, the mellotron adds a quality reminiscent of film scores from another era.

As the story progresses, the music subtly shifts, gradually becoming more emotionally intense.  There’s a foreboding underpinning that drawn us deeper into the  drama. The tone of the score begins to unravel as the tension between the intoxicated couple escalates.

” Nijm and Irina’s fundamental views of their future put them at odds. At the same time, their deep romantic bond is unwavering throughout the storyline  and the film’s score,” explains Sutta. “We transitioned the music from classical to a modern ambient feel that builds on that deep emotional connection.”

Saleh Bakri (star of ‘The Present’, nominated for an Oscar by the 93rd Academy Awards this April): and  ‘Salt of this Sea,’ ( 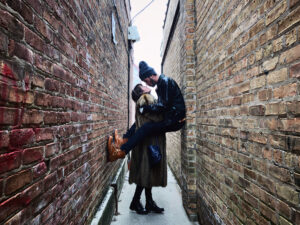 multi-award-winning film and Official Selection of the Cannes International Film Festival) plays the lead role in ‘Grasshopper.’ A versatile  international talent his films are showcased on worldwide streaming networks, and premiered at prestigious festivals, including Cannes, Berlin International, Toronto, BFI London. ‘Grasshoppers’ is his first’U.S. film.  Co-star Iva Gocheve is an actress and director. Her credits include an eclectic mix of films international projects, including ‘Embers,’ ‘Outer Space Love Stories, and ‘Sunday.’

Adam Robl and Shawn Sutta, multi-instrumentalists with a shared lifelong passion for music, have worked together for 16 years. They craft scores performed live by full orchestras, performing artists, and vocalists. Composing parts for a range of traditional and unconventional instruments, their shared passion for  music elevates films, heightening audiences’ cinematic experience.

The composing duo’s first collaboration on the feature film score for ‘Uncle John’ (Director: Steven Piet.) The film premiered at SXSW in 2015 and theatrically distributed. Lakeshore Records recleased the soundtrack.  ‘Poser’ (Directors: Noah Dixon and Ori Segev,) is an Official Selection at Tribeca Film Festival/2021. ‘‘Before the Fire’ (Director: Charlie Buhler/Showtime), and Late Life’ (Director: Frank Chen/Netflix) are also among their film credits.

The partners are know for theirversatility and use of a broad palette of sound and styles. The team has created original scores for films and episodic series showcased in theaters, on HBO, Showtime, Netflix, Hulu, Amazon Prime, and at festivals all over the world.

Since the 2011 launch of their recording studio in Miami, locations in Los Angeles, Chicago, New York, City, and Nashville provide the partners with an expanded network of resources throughout the U.S.

Draw Me A Sheep Productions