When it came to telling the story of Menudo – the iconic Puerto Rican boy band – for the four-part Max Original Documentary Series Menudo: Forever Young on HBO Max, cinematographer Mecky Creus had the challenge of wanting to match present-day interviews with the band’s archival footage. To accomplish that, he selected the Panchro/i Classic FF range of lenses from Cooke Optics.

While Creus and co-directors Ángel Manuel Soto and Kristofer Ríos knew that Menudo: Forever Young would be shot using digital cameras, the question of what lenses to use quickly became a point of discussion. 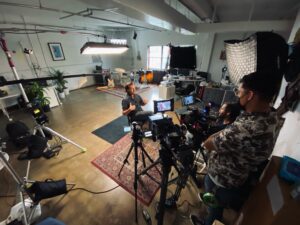 “The question was simple,” said Creus. “Modern lenses or vintage lenses? I often prefer old lenses, especially when shooting on the newer sensors that are so sharp, you can see everything…we didn’t want that, especially for the story we were telling.”

With Creus wanting to use vintage glass, he tested a large selection of old lenses at LA Film Boutique in Burbank. Creus developed his knowledge of Cooke’s range of lenses early in his career during his time working at Chater Camera in Berkeley. He came to the project with this knowledge but with an open mind based on the goals of this series. After ample testing, the obvious choice for the project became the Panchro/i Classics. He recommended and shared samples of the glass with the directors and they loved the look and feel of them, so the choice was made.

“The Speed Panchros Classics in their original housing is perfectly color-matched across all of the focal lengths,” said Creus. “When I am looking at lenses my first impression is always about how skin tone renders. Other things I look for include lens resolution, barrel distortion, flaring, fall-off, and bokeh. It was the Panchro Classic lenses that gave me a look that was true to the intentions of the directors. I knew that the Panchro Classic was my lens.” 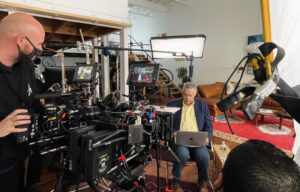 Menudo: Forever Young is a riveting four-part docuseries on HBO Max chronicling the untold story behind the rise and fall of Menudo, the first boy band and the most iconic Latin American boy band in history. It tells the story of the band you know, and the story you don’t – like every band member being replaced once they turned 16.

For Creus, getting this gig had everything to do with the location and connection to the place. That setting was Puerto Rico, where Creus is from and Menudo was formed. But as chance would have it, Creus connected with his future Boricua collaborators not in Puerto Rico but in Cuba.

“I was in Havana with my partner Adrienne Hall in 2020, working on a film about Cuban posters,” said Creus. “Angel was invited to come and show his film Charm City Kings to local Cuban artists as part of the documentary and that is where I first met him. Coincidentally we both grew up in Puerto Rico in the same area, went to the same college, and even had similar circles of friends. After Charm City Kings, Angel was getting a lot of offers to direct narrative films, but given his Puerto Rican roots a project about Menudo really clicked for him, as it would for all Puerto Ricans. We all grew up listening to their music and celebrating their global success; however, not many knew the dark side of Menudo or what some of the boys went through while they were in the band.”

At the very end of 2020, I received an email from Angel’s Puerto Rican co-director and co-executive producer Kristofer Ríos about getting on a Zoom call to discuss the project. Immediately my interest was piqued. Producer, Enrique Rivera who is also from Puerto Rico, was on this first call. It’s rare that you get to collaborate on projects where the key creatives and decision-makers come from the same place you come from and share the same background as the subjects whose stories we were telling. The series is what it is because of this shared experience and understanding.”

After being told about the project, talking about documentaries they liked as references and what would drive the project, everything was connecting for Creus. “I put together a lookbook presentation that relied heavily on treating archival material as well as shaping an interview approach that could exist seamlessly in an otherwise archival-driven piece. And it was Gabriel Rivera, the archival producer, who did an amazing job. It was the archival material married with the interviews that would hold the piece together. We were able to replicate our approach to the two-camera interviews, with the same lensing across 30 locations to capture the histories of almost half of the total 32 living band members.

Menudo: Forever Young made use of the 18mm, 25mm, 32mm, 50mm, 75mm and 100mm Panchro/i Classic FF for two ARRI Alexa Mini cameras. While Creus owns one of the Alexa Mini cameras, the other camera and lenses were provided by various AbelCine locations and The HD House.  Production was in ProRes 4444 in 4K 16:9.

“After the first former Menudo member interview, Creus was getting a feel for how these specific interviews would go. “I got a feel for the length, but even 6-9 hours would go by very fast. While some former members reflected on their time in Menudo as being an exciting part of their past with ups and downs, others were emotional in sharing their trauma and healing journeys, 30-40 years later. It was vital to make sure they each felt comfortable and to build a safe space where they could share their truths.”

“The interviews would chronicle each former member’s beautiful and not so beautiful experiences”, according to Creus. “Some were in the band for a year, others for four years, with varied experiences. Each member has their own respective legacy within the history of Menudo, it was essential to give each member that unique setting and spotlight to let them share their stories. It helped that our crew was like a family. We all spoke the same language, literally, and they could do their interview in English or Spanish. We treated each band member with respect and I just followed the director’s lead. Each interview setting was made to feel like a living room that was private and secure. We’d pick the right location; it would be set up with the right look and we’d light it to be as cozy and comfortable as possible with soft and natural lighting – we would even add a little haze in the background to push that vintage look and feel. We would already be rolling cameras when the interviewee arrived, they would get mic’d and we would begin straight away. Other than the pre-roll there were no surprises as interview topics were discussed ahead of time to protect some of the sensitivities around the subject. While the subjects could see the directors and me, I always avoided making eye contact during the interview…just try to be a fly on the wall to let the conversation flow, while everyone else in a hidden away in video village.” 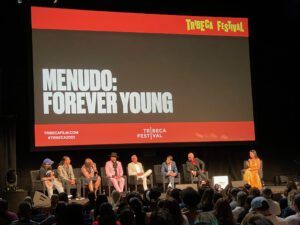 Creus would typically use the Panchro/i Classic FF 32mm for his A camera’s medium shots and the 75mm for his B camera’s close-ups. “I was clear on the close-up framing and angle so that I could connect with them and be as intimate as possible. The 75mm gave me that feeling. We had nice separation between the talent and the background.”

In the end it was two things that made Menudo: Forever Young really work as a docuseries: “Friends and Colleagues approached me saying ‘your cinematography was very intimate and honest,’ and the archival footage took people back in time.

“It was essential to find a bridge with the extensive archival footage in the series, to interviews with former Menudo members and experts on the history of Menudo and Puerto Rico. A unique creative team brought this project together and it was essential to have the right lenses to highlight and capture this special story.” 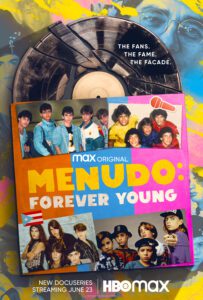