Cooke Panchro/i Classics bring the Cooke Look to King of Boys: The Return of the King

To shoot the sequel to the acclaimed political thriller King of Boys, cinematographer Kagho Idhebor chose the Cooke Optics Panchro/i Classic to help Nigerian director and writer Kemi Adetiba achieve her vision for the project.

The original King of Boys feature film, also written and directed by Adetiba, follows the story of Alhaja Eniola Salami, a businesswoman and philanthropist with a chequered past and a promising political future. As her political ambitions see her outgrowing the underworld connections responsible for her considerable wealth, she’s drawn into a power struggle that threatens everything she holds dear. Details about the sequel are shrouded in secrecy but will provide a long-awaited continuation of the gripping story. 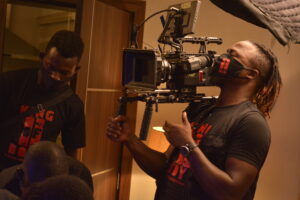 “I was introduced to Kemi through another director, Tope Oshin. Kemi asked me to shoot the promo trailer for this sequel, and a working chemistry developed during that shoot that led to us embarking on 62 days of principal photography for King of Boys: The Return of the King, her third feature film project and the most interesting, longest and toughest project I have attempted in my career,” said Idhebor.

Major references for the look and feel of the film included City of God and The Godfather, with the requirement for a stylized and filmic look. “There were lots of times Kemi would whisper to me, “This scene is so warm, please can we make it colder? Because death is cold and it is easier for the audience to empathize if the look is right.”  “That opened up a new door to experimenting more with the cyan blue suggested by the Gaffer, Kayode Abolade, and I found that combo with the red gels and haze created a beautiful motif for some characters,” he recalled. 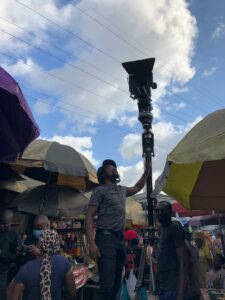 Idhebor’s collaboration with the director was an interesting one; since Adetiba was also the scriptwriter, her thought process was there on the page, but she also liked to improvise on set. “We crashed into some of the locations on the day of the shoot and we were faced with working things out on the spot – which I loved a lot because it was a big test to our creativity,” he said. “I think some people are born to face the blank pages and they excel regardless. We would talk through the scenes and the shots and I would come up with suggestions for movements and compositions.”

Kagho Idhebor chose to shoot with the RED Gemini since the style was heavy on handheld photography. “Being portable, the Gemini is completely suited for that, and it also has amazing low light capabilities which I took advantage of,” said Idhebor. “Over the years I have trained myself not to choose specific cameras unless the camera adds a certain function to the storytelling. Other than that, I could work with any camera and I would rather be selective when it comes to choosing lenses.” 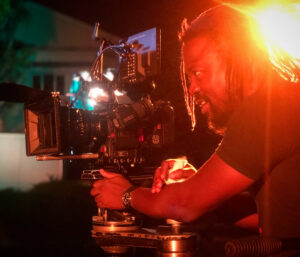 Idhebor had used Cooke lenses many times before on films, documentaries, and TV commercials, most often the Cooke miniS4/i family which was more widely available in the Nigerian market. “The Cooke lenses have got a couple of features I love and make them my first choice,” he states. “The first is the gentle yet pristine imagery. Also, their great tonal separation gives the images a cinematic look even without proper lighting; that alone is a big advantage for cinematographers. Lastly, the way it handles flares and how it makes them beautiful and pleasing to the eyes is one of the best features a flare-loving director or cinematographer can ever ask for.”

Cooke lenses were already Idhebor’s preference for the King of Boys: The Return of the King project since he had discussed with the director a gentle yet filmic look. However, the actual family of lenses changed during a test. “I planned to use the Cooke miniS4/i initially, but my focus puller, Henry Young, suggested we go for the Cooke Panchro/i Classics because he had just finished a project where he worked with them and thought they would work well. I decided to give them a try and it was the best decision we made.” The Panchro/i Classics were supplied by Klink Studios, one of the leading film and television rental houses in Nigeria. 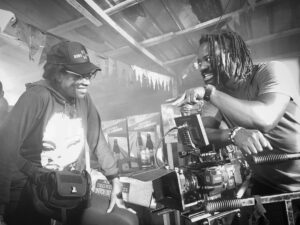 “Apart from the ‘Cooke Look™’ which was perfect for the feel of the film, one very important aspect the Panchro/i Classics lenses gave me was those beautiful flares, and I took advantage of them a great deal in the storytelling,” he continued. “There is a mysterious character in the film whom I always lensed against a hard light because the flares helped in making the character very powerful, and my director always loved the flares each time they appeared on her monitor – she would always give me the thumbs-up gesture from her seat and that became my little trick to make her happy each time the chips were down!”

The production also utilized the i/Technology metadata captured by the lenses. “I think it’s relevant information for cinematographers to be aware of because it eases a lot of stress and also makes the post-production workflow seamless,” said Idhebor.

King of Boys: The Return of the King is currently available on Netflix.