St. Petersburg, Florida, June 1, 2022 — CP Communications and its subsidiary Red House Streaming have gradually evolved their St. Petersburg, Florida headquarters into a specialized broadcast and production center that even produces and streams original programming worldwide for local and remote talent. The growing media and entertainment company has now deployed a varied network infrastructure of 1Gb and 10Gb pipes that interface with its two homegrown RHS studios and new RHS-36 truck, allowing the company to seamlessly manage live content coming from and going to any location globally – without leaving the property, and without leaving the IP domain if desired.

These advances, along with the ability for clients to bring their own production trucks to interface directly with the IP network infrastructure, have inspired CP and RHS to formally rebrand the facility as Red House Streaming Production Center. The facility has already hosted several REMI productions, including the Bermuda Track and Field Championships and two ACC Golf Championship events.

“We differ from conventional production centers because we offer a true all-IP production ecosystem,” said Kurt Heitmann, CEO, CP Communications and Red House Streaming. “We offer multiple levels of professional production using traditional studio or control room workflows. Regardless of which production service is used, we acquire in IP, we produce in IP, and we distribute in IP. We can keep it all in IP with our vMix workflows, or also decode content for a traditional SDI workflow onboard RHS-36. We can then encode it back to IP for distribution.”

As Heitmann explains, the Red House Streaming Production Center uses Internet Protocol compression standards in ways that allow clients to capture, edit, process and deliver programming in their preferred formats. “We work in compressed environments, instead of moving uncompressed content around the facility on network cable,” said Heitmann. “Working in compressed environments is what gives our clients the freedom to manage content to and from anywhere globally over IP in a variety of formats, including RTMP, RTSP, SRT and NDI.” 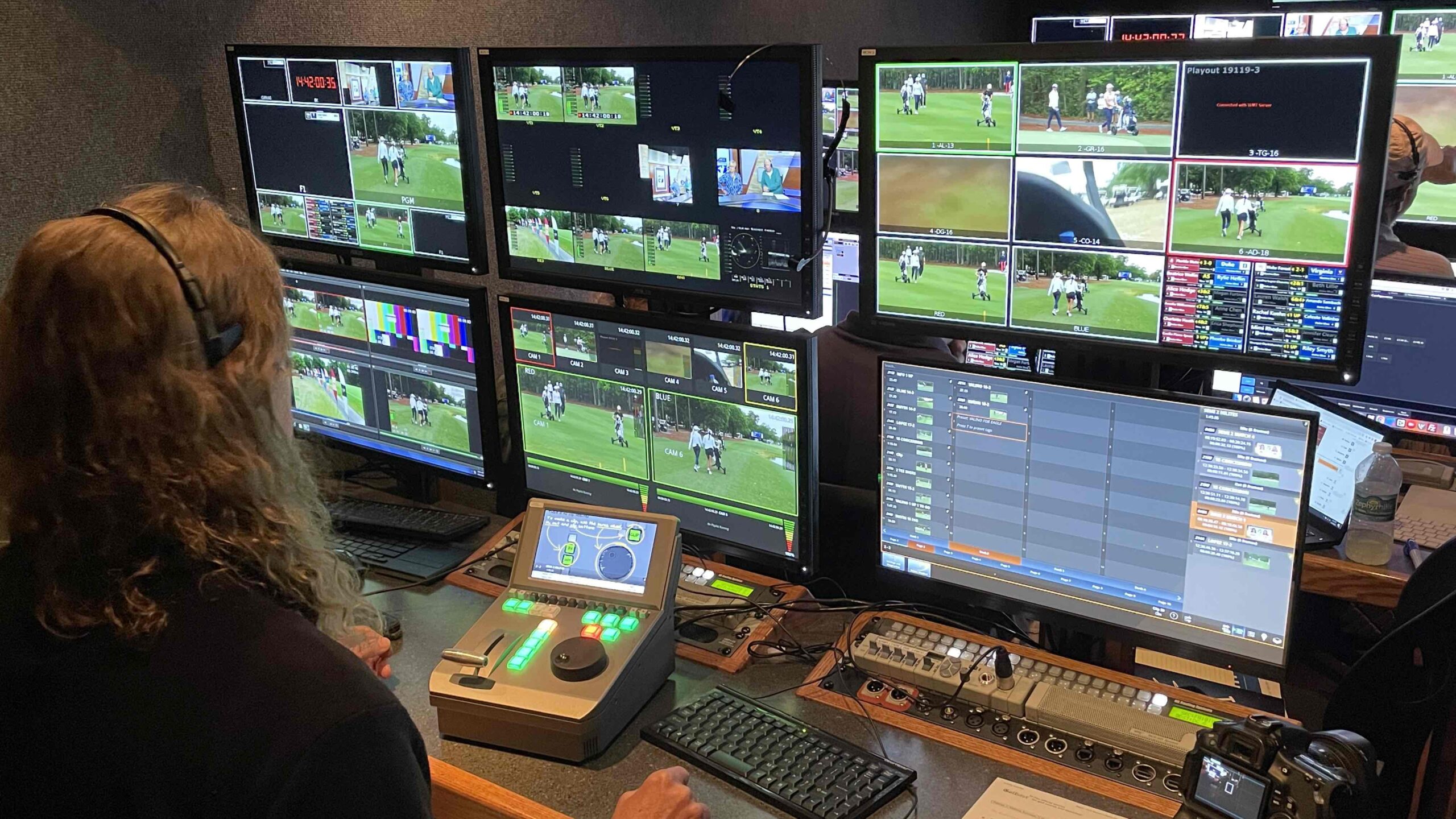 The first 2022 REMI production project from Red House Streaming Production Center was the Bermuda Track and Field Championships for Carr-Hughes Productions (CHP) that aired on NBC Sports. This project utilized CHP’s High Rock mobile truck. Red House Streaming engineered a layer 2 network that transported eight video signals with 32 channels of audio, RVON communications, control data for cameras, return video and scoring data to and from Bermuda. “Basically, we extended the truck and production center networks to Bermuda,” said Heitmann. “The NBC announcers were in RHS Studio A and the international commentator was in RHS Studio B, and it was as if they were onsite.”

CP’s RHS-36 mobile unit was later brought in for the ACC Women’s Golf Championship, which took place in Pawley’s Island, South Carolina. CP and RHS acquired eight bonded cellular signals from the Reserve Golf Club and natively placed them into the traditional control room workflow onboard RHS-36 back at Red House Streaming Production Center. The content was managed and processed on board RHS-36 in a traditional SDI video workflow, which includes a Ross Video Carbonite switcher, Ross Xpression graphics, Evertz Dreamcatcher replay systems and Yamaha audio mixing, before being distributed over IP to the web. A similar project for the Men’s ACC Golf Championship event live from Panama City, Florida followed one week later.

“The ACC Women’s and Men’s Golf Tournaments were the proving ground, as they had six hours of live transmission with eight cameras including an RHS CamSTREAM, a drone and six traditional cameras – all coming into RHS-36 over bonded cellular,” said Heitmann. 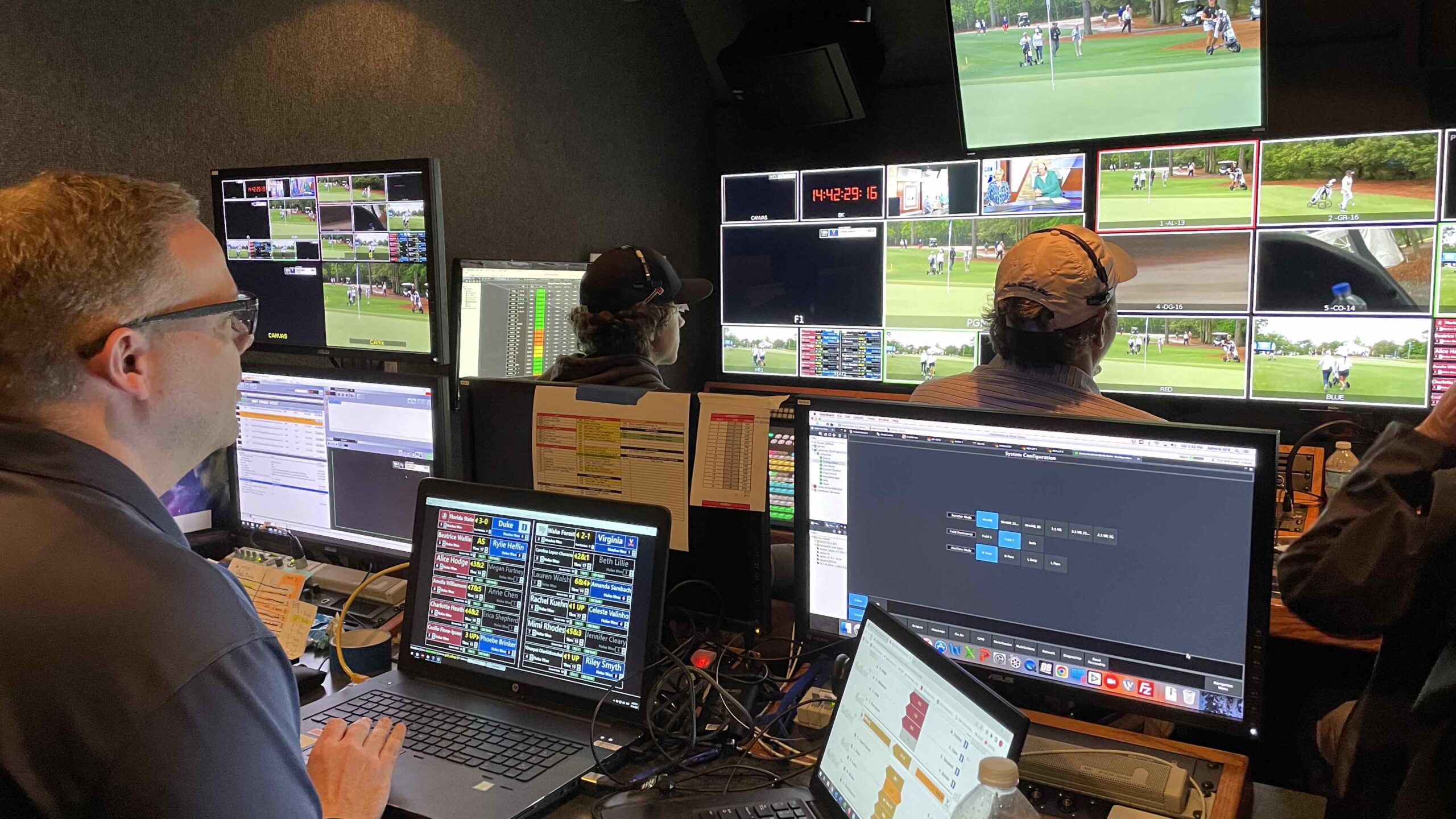 While RHS-36 offers a more traditional control room environment, RHS Studios A and B offer true studio workflow environments for clients that truly want to keep it all in IP. “We are using our vMix studio switching workflows in the two RHS studios, which keep everything in native IP,” he said.

“We have 1Gb backup pipes for transmission, engineering and other production arms that assure uninterrupted service, and we have a full NOC for monitoring and quality assurance as well as to manage remote talent,” said Heitmann. “It’s all about providing the most flexible and reliable solutions for today’s varied REMI productions, and we can handle it all from Red House Streaming Production Center.”

Red House Streaming supports, enables and simplifies the creation and delivery of broadcast quality media content. Powered by CP Communications, Red House Streaming (RHS) provides custom glass-to-glass IP production and streaming solutions for every type of live event or recorded program. With our solutions, you can bring unmatched efficiency to your operation, enabling superior live video streaming without the need for costly satellite uplink equipment or airtime. Whether you shoot at our studio or remotely, RHS makes producing and streaming content easier and more affordable than you thought possible. Learn more at www.redhousestreaming.com.

For more than three decades, CP Communications has provided high-quality, cost-effective live event production solutions to major broadcasters, sports leagues and teams, and event and production companies. Our solutions include access to experienced professionals, state of the art equipment, and innovative technologies and techniques for wireless audio & video content acquisition, transport and delivery. Our culture of innovation, coupled with the highest quality assurance standards and passion for customer service, promote collaboration with our clients to determine the best custom solution for each live event. Learn more at www.cpcomms.com.