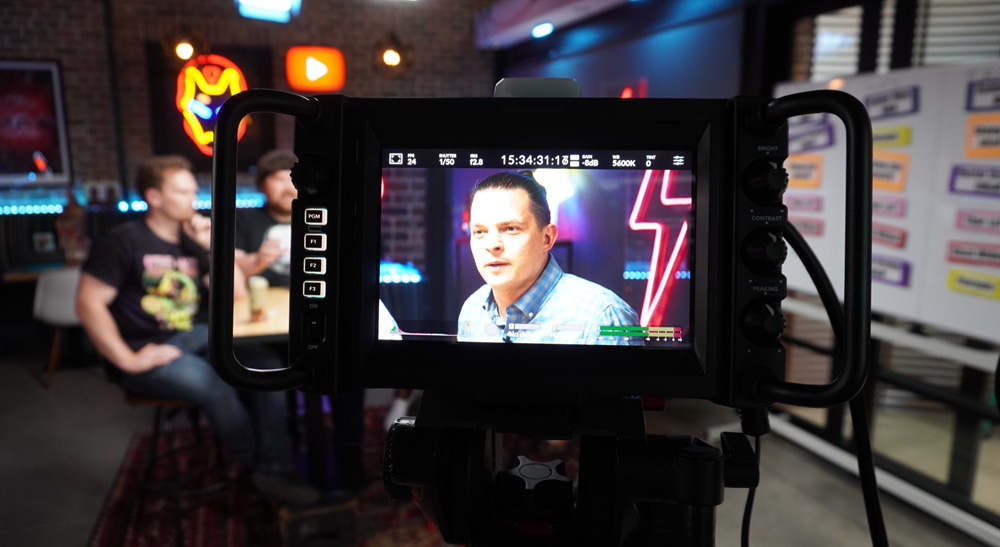 Founded in 2015, New Rockstars is a digital content company based in Burbank, CA. Its flagship YouTube channel of the same name is an industry leader in film, TV and trailer analysis, specializing in Marvel, DC and Star Wars content. The team has released more than 2,200 videos which have over 1.4 billion views, and “The Breakroom” is their daily live show that covers the nerdy news of the day. Produced by John Costa and Dodson Seitz, it features rotating panelists and writers including Brandon Barrick, Tommy Bechtold, Jessica Clemons, Zach Huddleston, Filup Molina, and special guests.

“Our viewers have commented the show looks prerecorded and it’s not, it’s live. This is a new show for us so delivering a high quality experience for our viewers while staying on budget and having reliable gear were very important,” said Huddleston, who also oversees the channel’s technical workflow. “We’re basically live streaming a broadcast like panel show with incredible looking shots, camera switching and graphics. The content we’re putting out is top notch.”

Powering “The Breakroom” is New Rockstars’ multi camera setup which consists of four Blackmagic Studio Camera 4K Pros. The cameras are connected to an ATEM Mini Extreme ISO for live streaming directly to YouTube, switching, transitions and uploading select graphics. The switcher’s built in Fairlight audio mixer allows Costa to adjust audio levels easily, and he uses automations on microphones and other graphics, as well as adds compression and a noise gate to their microphones. In addition, a HyperDeck Studio HD Plus broadcast deck is used for graphics playback.

“The Blackmagic Studio Camera 4K Pros are very easy to use and the image quality is just great. The low light performance has proven helpful when capturing darker shots inside the studio,” said Costa. “We have one camera operator inside the studio with the hosts while I switch the show from the control room by myself. It’s straightforward in terms of workflow, but having an ecosystem that I can fully manage while running such a fast paced and interactive show is incredible.”

“Just recently, we did a Friday the 13th show and took advantage of the ATEM’s built in color corrector, making the shots captured on the camera look red. Being able to apply a red filter on the fly and not having to work in post saved us so much time and gave viewers a creepy, cool experience,” he added.

Beyond the ATEM Mini Extreme ISO’s live production capabilities, New Rockstars is taking advantage of the DaVinci Resolve project files to download the live production and use clips for promotion on social media. This workflow saves the team valuable time and allows them to remain focused on the big picture.

“Since this show is not actually streaming live, we can add things, do retakes and clean up any mistakes after the fact in DaVinci Resolve thanks to the separate ISO recording file generated by the ATEM,” Costa added. “This is just another example of how much we’ve been able to accomplish with our Blackmagic Design gear in a short period of time.”

“New Rockstars is building a larger studio where we plan to have a live audience join our hosts,” concluded Huddleston. “Just like with the creation of our full fledged studio, we’re taking our content to the next level. Blackmagic Design not only helps us elevate our current productions but also supports us as we take the next step with our upcoming content.”