Dave Hussey is one of the top colorists in Hollywood, having worked on dozens of feature films, commercials and more than 2,000 music videos.

Hussey recently received an AICP Award for a Diet Coke spot, “Drink What Your Mama Gave Ya.” He was nominated by the Hollywood Professional Association (HPA) for his color grading on the feature thriller, Red Sparrow. He colored Sports Emmy Award-winning “Daytona 500 – Daytona Day” promotional spot for Fox.

Broadcast Beat’s Frank Beacham spoke with Hussey about his work. 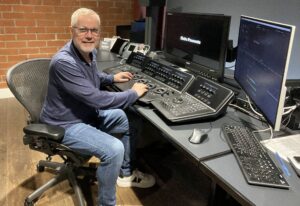 Frank Beacham: How does a film colorist like yourself get started in the business?

Dave Hussey: It’s probably different for about everybody. I’ve been coloring since 1985. Back then, the only way you could become a colorist was to work at a large post-production facility. I started at film school, and thought I wanted to be an editor. I got a job as an assistant online editor.

One day I noticed a color correction room at the facility where I worked. It was basically just RGB color correction on a film system call a Rank Cintel Flying Spot Scanner. I walked in and talked with the colorist, who also maintained the equipment. In those analog days, maintenance was no easy feat. He taught me how to color, which was easy to do because it was very basic. As the technology evolved, I evolved. That’s how I got started.

Frank Beacham: I want to keep this on a kind of basic level for people that don’t fully understand what you do. Am I correct to assume that a colorist designs the color scheme of a film or commercial for a specific mood or visual style?

Dave Hussey: Let me start by saying that raw video footage is basically very flat and colorless. We take this raw data, and then manipulate it in a way to make it pleasing to the eye. For example, the director of photography is shooting a scene that’s supposed to be at night, but it’s really only late afternoon. We take that scene, which might be too bright, and bring down the brightness and add warmth to make it appear later in the day.

Say a face is a little bit darker than desired. I can take a window and just circle the person’s face and track that window and brighten it up for the entire scene. Quite often, we may darken areas of the frame that was too difficult for the director of photography to deal with on location. We have full digital control over the image and can use shadowing, brightening and color enhancement to make the image look pleasing. 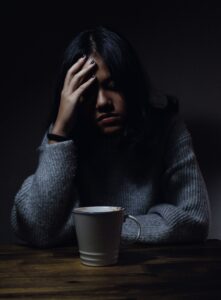 Frank Beacham: Certain colors have unique psychological effects. How do you choose the color to enhance a story?

Dave Hussey: Especially with large features, there’s a lot that goes into pre-production planning. The set-designer, wardrobe, makeup and a lot of factors go into the choice of color and creating the world of the film. If you have a very sad scene, you may have the talent wearing grays or dark colors, making the set essentially colorless. The color choices for each scene are picked in pre-production.

Frank Beacham: I understand you sometimes work with color scientists. What do they do?

Dave Hussey: Color science is relatively new. It helps us find a setting on the camera that will be close to what the ultimate color will look like in the end. The editors, producers and studio executives will see more of what the film will ultimately look like out of the camera. For example, I’ll ask the director if the scene should look modern or have been shot in the 70s or 80s on older Kodak film stock? Let’s say he wants the older look.

I go to the color scientist and say we want it to have like a slightly dated look. The digital image out of the camera is made to look like older Kodak film stock. Even though the camera is still recording in raw, we have this set of parameters that will immediately give the footage the altered older film look. Color science is a very technical job. Since every camera has a different sensor, the color parameters have to be set up for that specific camera. 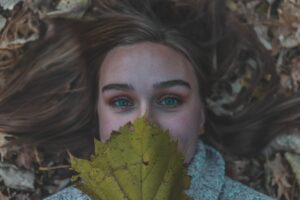 Frank Beacham: You do feature films, commercials and music videos. Is the color process different for each type of project?

Dave Hussey: When I’m working on a theatrical feature, I work in the P3 color space. It’s made for cinema projection. When I’m doing commercials, I work in Rec. 709 for viewing video. With streaming channels like Netflix or Hulu, I mostly use a system called HDR, which is for high dynamic range. It gives the viewer a wider contrast ratio of blacks and whites and a more vivid picture. The choice depends on the project.

Frank Beacham: Over time, do the styles of color change? Meaning is there a danger of falling into a stylistic cliché that will look strange 20 years later?

Dave Hussey: It can happen because we are doing projects with the styles of a given time. For music videos, for example, we really stylize them in most cases. Since they are only about three minutes long, this is OK, but you would not do this for a feature film. I look back now on when I worked with Michael Jackson. I would never color those videos the way I do now, because the style we used was popular in the 80s and 90s.

Today, with the advent of digital coloring, we have so much more range and control. Most times that’s a really good thing. But you have to be careful because it is easy to over colorize something and take away from the story. A lot of advance thought goes into how to color a film.

Frank Beacham: What kind of software do you use for your work?

Dave Hussey: There are several systems out there, but I use DaVinci Resolve (from Blackmagic Design). I’ve worked with that in one carnation or another since 1987. They’ve been around for quite a while. I think all the systems are very good. But for me, I’ve used Resolve for so many years. I’m very quick at Resolve and have the muscle memory. I know where everything is. It’s mainly a comfort level and rare that colorists change systems.

Frank Beacham: You’ve done a lot of videos and worked with lot of directors. Have you ever gotten into a situation where you really disagree with the color choices that the director makes? Since your reputation is on the line, how do you resolve that?

Dave Hussey: The director is the boss and what he or she says goes. However, when I think there is a better option, I try to show the director a different look for the film. I’ll say I’d like to show you some other options that I like, as well. I think it’s a mistake for colorists to just throw everything against the wall and see what the director picks. 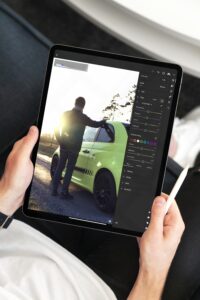 Frank Beacham: Final question, since the pandemic people have been working from remote locations. Has this affected your business?

Dave Hussey: Recently, when doing commercials and music videos, I’d say we do 90 percent of them remotely. We do them via Streambox. I had thought after COVID there would be a flood of people back into the bay. But that really hasn’t happened. People are very comfortable with using Streambox and are doing it virtually.

One important thing I’ve discovered is the iPad Pro gives incredibly accurate rendition of the color compared to my Sony monitor. I mean they’re looking at virtually the same thing. It’s very accurate.

There’s one caveat to all this. I’m not a fan of remotely coloring a theatrical feature, as opposed to a TV show or a commercial where you’re coloring on a glass monitor. I’ve found it very difficult for the DP to be looking at a film on his iPad and not seeing the images projected on the big screen. I think for films you really should be in the theater looking at the picture.