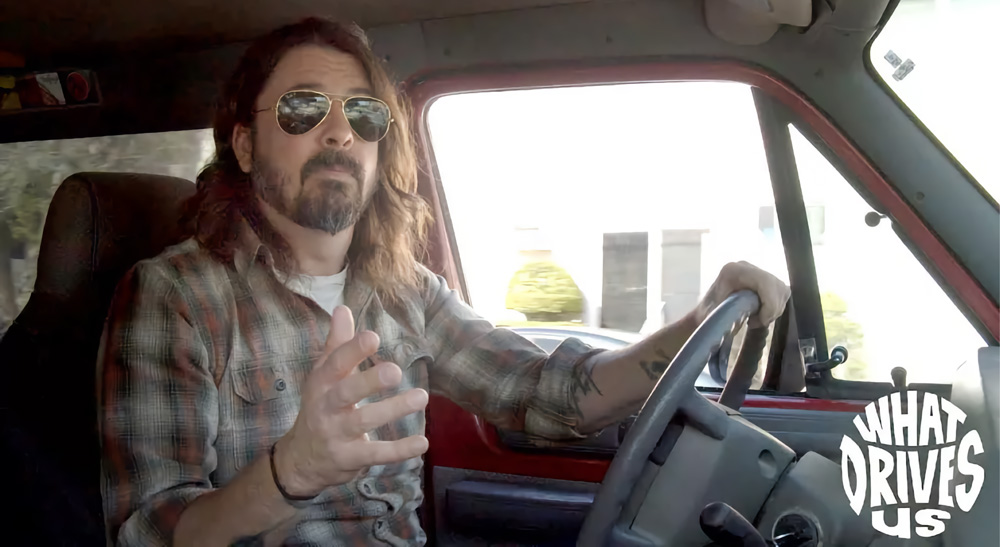 Fremont, CA – June 11, 2021 – Blackmagic Design today announced that “What Drives Us,” the new documentary by David Grohl of the Foo Fighters, was shot using a variety of Blackmagic Design cameras. This included using URSA Mini Pro 4.6K G2 and Pocket Cinema Camera 4K to capture interviews with some of rock’s biggest icons, including Ringo Star, Steven Tyler, Ben Harper, The Edge and Slash. The documentary also used DaVinci Resolve Studio to edit and grade the film.

“What Drives Us” shows the commitment of bands and artists to play music for others anywhere the road will take them. The film is filled with interviews from the world’s biggest musicians and looks at the tradition and rite of passage of rock bands going on the road in any vehicle they can afford. To shoot “What Drives Us,” Grohl chose Jessica Young as the cinematographer.

Young was faced with shooting a documentary that included a huge amount of hours of interviews. Due to the hectic schedules and locations of Grohl and the interviewees, she shared the daily shooting duties with cinematographer Todd Bell. Young relied on two Blackmagic URSA Mini Pro 4.6K G2s as her main interview cameras, with the Pocket Cinema Camera 4Ks being used by different crew members, who were able to easily learn how to operate them and could jump in and capture spur of the moment shots.

Young explained the vision that she and Grohl had for the film: “What Drives Us” is a talking head plus archival picture. I got the sense early to go with a ‘punk rock’ approach: make no rules with the freedom to err on the side of not normal. The subject matter was about musician misfits cramming themselves into vans and touring the country come hell or high water. Stories about living through bad food, bad sleep, bad gigs and dangerous road conditions while running down their dreams.

We also kept lighting naturalistic and took liberties with some off framing and stuffed close ups. The edge of frame in the wide angle often had a foreground element and the close up frame might be a little ‘in your ear’ or awkwardly close kind of view if you were crammed inside a van with your band.”

Since each interview was at a different location, Young and her crew never had a chance to scout before shooting. Decisions had to be made the day of and had to be simple.

“Both Todd and I have used Blackmagic cameras in the past and know they will give me an amazing image. And with the high dynamic range and ease of use, the cameras let me be incredibly creative while handling any of the regular challenges a shoot like this has,” Young said. “And being able to have the rest of the crew easily grab a Pocket got me a lot of great shots. The C Cam ops were a handful of great guys and we usually shared a common AC who would then pick up a Pocket when rolling on interviews, often catching Dave in a follow up question or laughing moment.”

Those impromptu moments and making sure that Grohl’s interviews were not interrupted was another reason why Young chose Blackmagic Design cameras.

“I have used Blackmagic cameras a lot in the past. They are reliable,” she said. “I haven’t counted them all, but I’ve been fortunate enough to be in the room for probably 100 interviews with Dave. I understand the way he likes to work and how he has a conversation. We might occasionally cut and re slate once in awhile, but for the most part, this project was recording very long takes, which can always be a bit nerve wracking in the event of a corrupt file. Especially when there is no take two and likely no chance of reshooting with that particular rock star. So the reliability of the Blackmagic cameras is important.”

“Blackmagic RAW is such a great flat base. The latitude and range is exactly what we needed to not only easily match our multiple cameras, but we could lean into taking the color grade to a look nearer to some of the archival footage that is throughout the film. Ultimately, this made for a seamless story telling flow,” she continued.

“With interviews, there tends to be only a few choice angles that may in a flattering way contain a person’s head and body without distraction in the background. With ‘talking heads’ you want the audience to be listening to what the person is saying – not wondering about that lamp in the background that is growing out of their shoulder. Because we were shooting with the Blackmagic cameras, they gave us the option to slightly reframe in post, making the second angle a clean single if needed,” she explained.

“I think the Blackmagic cameras are the best if you are trying to keep costs down with a project you know will be multiple cams. The project was finishing in DaVinci Resolve, so there was absolutely no worries about the footage translating to our post work flow,” Young concluded.