The show is based on writer Hideo Okuda’s novel “Rumor woman,” and includes famous Japanese actors such as Adachi Rika, Nakamura Shunsuke and Tayama Ryousei. Voice recording, editing, audio mixing and color grading was handled by Tokyo based Bull Inc. Bull Inc. also is involved with post production on a number of other drama works for networks such as TBS,TV Asahi, as well as production and post for sports broadcast and film production.

Bull Inc. used DaVinci Resolve Studio for the color grading of episodes 4 to the last episode of “Rumor Woman,” along with a DaVinci Resolve Mini Panel, which was installed in the company’s 4K online editing room. 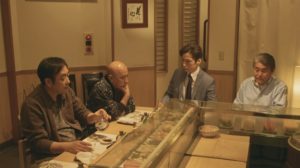 “I used DaVinci Resolve for the first time. What impressed me at the beginning is the function of the tracker. It allows me to pinpoint where you want to partially color grade, and you can track by just hitting a mask. It’s a very accurate and very good feature. There are many features to adjust the tone of a person’s skin and the color of the sky, but this tracker function was very active,” said Mr. Kenta Suzuki, edit section of Post Production Engineering Department. ”There was also a lot of shooting outside and sometimes the color of the sky changed, but color grading made it possible to have uniformity. In one dubious scene of a mysterious woman, played by Rika Adachi, I created a darker look overall, but I paid close attention to her skin tone to avoid making her skin too dark.”

“We also used the DaVinci Resolve Mini Panel. I was deeply moved by the DaVinci Resolve Mini Panel, which can work intuitively. Because, until now, I was working with a mouse and the work I was doing cannot be done with just a mouse. But such fine adjustments can be done easily with the Mini Panel. It is wonderful to work with feeling,“ he said. “Although there are four directors, each person with their own individuality, with Resolve and the Mini Panel it was able to be finished with a unified film look.”

“Since the formats for distribution and broadcast are different, we had to deliver them in their respective formats. Offline editing, online editing and master audio all had to be finished for one episode per week. It was a very tight schedule for two months and in this situation, it was great that we were able to reduce the time for color grading,” said Mr. Akihiro Ibe, System Engineering Section of Post Production Engineering Department.