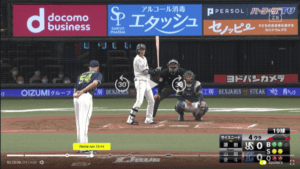 DAZN’s latest evolution gives subscribers control over their own highlights experience, allowing them to pull up and select a recorded or in-progress NPB game, load it, and use the scrub bar to navigate to critical highlight markers to watch important plays, such as home runs, scoring plays, and more. “Football fans love ‘Key Moments,’ so we knew if we could translate that feature to baseball, it could take the NPB fan experience to a whole new level,” shared Fred Clarke, Head of Product, Sports Data, DAZN.

Ahead of launching the new feature, DAZN worked closely with its colleagues in Japan to build an application to support this functionality. It first determined which plays the application would define as highlights, using available Stats Perform data. The team then had to accurately sync this data with its live game streams and found ML the best way to do so. Clarke added, “Due to the sheer frequency of NPB games and duration of the season, we identified early on that automating the synchronization would be crucial, which is where machine learning came in.”

Whereas football plays can be mapped to a clock, baseball isn’t timed the same way, so the team needed a way to automatically detect the start of a game so that the highlights would line up accurately in the video timeline. They explored a range of options and chose to use the first appearance of the score graphic (including the number of balls, strikes and outs) – which coincides with the start of the first pitch – as the starting marker. With no off-the-shelf tool available to identify this graphic, they set out to build their own model using Amazon Rekognition Custom Labels, a fully managed computer vision service that allows developers to build custom models to classify and identify objects in images that are specific and unique to their business. Rekognition Custom Labels doesn’t require you to have prior computer vision expertise.

Building any computer vision model requires a proper data set, so the team used sample images from previous NPB video feeds with the score graphic, and a similar set without the score graphic. They labeled the images with the score graphic using Amazon Rekognition Custom Labels, and then trained the application to detect the initial appearance of this graphic. From there, the team provided the system with a list of all the key moments and times they occur, and it synchronized them with the video based on the time of the game.

“We quickly uncovered that if we could rely on the assumption that this graphic’s appearance as a proxy for the start of the game, we could use it as the benchmark for our timeline. Our only alternative to Custom Labels would have been to have a team member manually enter the appearance of the graphic, which would be less accurate and challenging given the volume of games each year,” Clarke explained. “The results are impressive, and the custom model we built using Amazon Rekognition has provided a level of accuracy we never thought possible.”

“NPB fans have responded with extreme enthusiasm. Matches run quite long, so unless you’re an avid fan, tuning into an entire game isn’t a reality, so now, more casual fans can even check in to see highlights, which wasn’t previously possible.”

Having experienced the problem-solving potential of ML tools like Amazon Rekognition, DAZN expects the technology to play a crucial role it its continuing work to enhance the subscriber experience and increase audience engagement across its offering. Clarke concluded, “Our team’s work on this new feature is setting the stage for more exciting fan experiences across the DAZN platform. Knowing that we’ve been able to crack that starting point code with a sport as sophisticated as NPB opens up similar opportunities for other sports from boxing to motorsports and beyond.”
For more information on Amazon Rekognition Custom Labels feature, visit: aws.amazon.com/rekognition/custom-labels-features/, and to learn more about the innovation potential of AWS for Media & Entertainment solutions, visit: aws.amazon.com/media/.