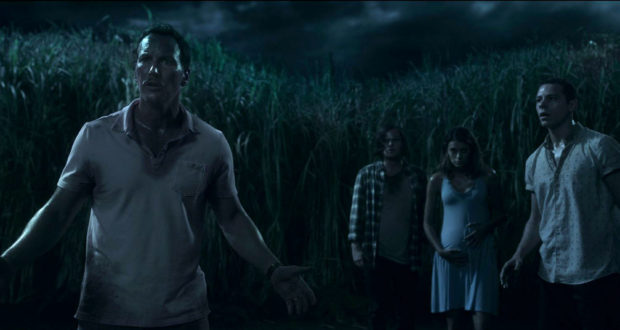 Based on the novella by horror maestros Stephen King and Joe Hill, Netflix’s “In the Tall Grass” transforms an unkempt field into an evil zone of terror. Upon hearing a boy’s cries, a brother and sister enter the field of tall grass to rescue him, only to realize they cannot escape. Director Vincenzo Natali and Cinematographer Craig Wrobleski enlisted Deluxe Toronto’s Joanne Rourke to finesse the film’s final look, using color to personify the grass.

“I worked with Vincenzo more than 20 years ago when I did the video mastering for his film, ‘Cube,’ so it was wonderful to re-connect with him, and a privilege to work with Craig. The color process on this project was highly collaborative and we experimented a lot. It was decided to keep the day exteriors natural and sunny with subtle chromatic variations between. While this approach is atypical for horror flicks, it really lends itself to a more unsettling and ominous feeling when things begin to go awry,” Rourke said.

“In the Tall Grass” was principally shot using the ARRI ALEXA LF camera system, which helped give the footage a more immersive feeling when the characters are trapped in the grass. The grass itself comprised a mix of practical and CG grass that Rourke adjusted the color of depending on the time of day and where the story was taking place in the field. For the night scenes, she focused on giving the footage a silvery look while keeping the overall look as dark as possible with enough details visible. She was also mindful to keep the mysterious rock dark and shadowed.

Rourke completed the film’s first color pass in HDR, then used that version to create an SDR trim pass. She found the biggest challenge of working in HDR on this film to be reining in unwanted specular highlights in night scenes. To adjust for this, she would often window specific areas of the shot, an approach that leveraged the benefits of HDR without pushing the look to the extreme.

“Everyone involved on this project had a keen attention to detail and was so invested in the final look of the project, which made for such great experience,” Rourke concluded. “I have many favorite shots, but I love how the visual of the dead crow on the ground perfectly captures the silver feel. Craig and Vincenzo created such stunning imagery, and I was just happy to be along for the ride. Also, I had no idea that head squishing could be so gleeful and fun.”

“Like farmers tending their beloved field, Joanne and Deluxe Toronto made ‘In the Tall Grass’ grow into the most beautiful of all my films,” Director Vincenzo Natali said.

“In the Tall Grass” is now available to stream on Netflix. For more info, visit: www.netflix.com/title/80237905