DFT, the leading provider of high-end film scanning solutions that preserve, manage, and deliver pristine film quality, in archives and post production facilities worldwide, will be showing its state-of-the-art WetGateTM technology for its latest Scanity HDR film scanner at NAB 2016.

DFT’s newly patented WetGateTM technology is designed specifically for DFT’s Scanity HDR model providing a real-time organic solution for the ingest and management of difficult to solve historical film transfer issues – such as dust and scratch removal – surpassing prior transfer standards. The WetGateTM is ideal for archive owners who need a scanner that’s able to handle a range of problematic and historically-aged film issues.

Simon Carter, DFT Sales Director, said, “We’ve responded to the needs of the archiving market by evolving our technology to address its requirements, first with the Scanity HDR, and now by including our WetGateTM technology.  By enabling many of the issues associated with historically-aged film to be addressed at the scanning stage, our customers have less work to do downstream, saving valuable time and money.”

Also on view at NAB 2016 will be DFT’s Scanity HDR, which was developed in response to the demands of the film market. It will be demonstrated with the latest Scanity software release. Scanity HDR now offers a host of new user friendly features, that serve a variety of film scanning applications, including – but not limited to: film archive scanning for mass digitisation; EDL/conform scanning; low resolution browsing for archive and restoration; short-form commercials; and 4K UHD ready and digital intermediate scanning.

Key features include its patented Black & White HDR function, a new triple exposure – executed once – in realtime 2K or 4K data ingest. This means the scanner speed remains constant, instead of having to slow down, creating significant time and cost benefits and allowing access to previously unseen details from the high and lowlights of the film faster than ever.

In addition to Scanity HDR and the new production ready WetGateTM, DFT will be showing a new solution for storage. An alternative to the more traditional SAN solution, ‘Space SSD’ is a new NAS (Network Attached Storage) solution, from GB Labs, which can be integrated into Scanity HDR and will be shown at NAB for the first time. 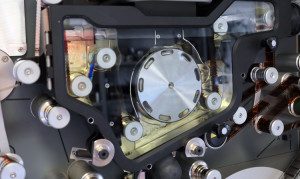