Zulu
THE BEAT:
Home » Content Creation » Audio » The New IT Director Versus the Old #Broadcast Engineer 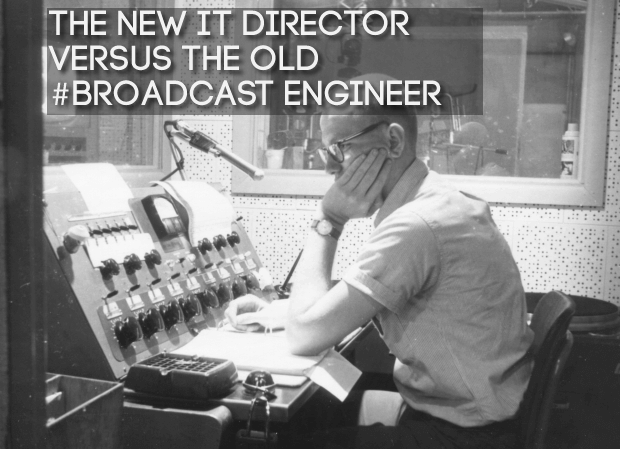 The New IT Director Versus the Old #Broadcast Engineer

Long ago, from the earliest days of media, it was recognized that there needed to be people who performed the technical workings of the studio. Aside from the inventors and photographers who tinkered with and were able to tweak cameras, the advent of radio brought the need for a true engineer who understood the inner-workings of electricity and the analog signal it could carry. This was to be a person who could read an oscilloscope and interpret frequency patterns. It was all vacuum tubes and miracles in those days.

“I started in 1972 repairing vacuum tube gear at the RCA Institutes TV Studio School, so I have seen it all,” states Keith Andoos, speaking as a broadcast engineer of the past. “Change is inevitable, and broadcast technology is no longer a ‘mystery’ to the rest of the corporation. In other words, it is no longer ‘a license to print money.'”

Today, broadcast and sound engineers install, set-up, calibrate, operate and repair electronic equipment used to transmit radio and television programs, regulating the signal for clarity and strength, monitoring the array of sounds for radio and both colors and sounds for television transmissions. While a license is not required in the U.S. to practice as a broadcast engineer, these positions usually require a degree (Associates, Bachelors or Masters Degrees, typically) in one or more fields, such as: electrical engineering, telecommunications, computer information systems, computer science or computer engineering.

A relatively new position that has cropped-up in the industry is the information technology (IT) director. The IT director manages the information technology side for a business or organization, developing and applying the various policies and goals for the IT department. Performing feasibility studies to decide upon the best use of technical resources, the IT director evaluates the business requirements of all the departments, determining whether a new information system or upgrades to existing hardware/software components would make a sound technical investment. In essence, a good IT director would know which of the information-handling equipment is best-suited for applications within their company and would have enough knowledge about that equipment to manipulate it fully. An IT director organizes the information systems managers under them and reports to the chief information officer (CIO).

Isn’t there a “happy medium?” Say, a mixture of both broadcast engineering and information technology? Yes, there is.

Usually a hybrid engineer, a combination of the broadcast engineer of old and the IT director of new, provides the blend of knowledge and expertise necessary to perform the duties for today’s specialized media markets. “There are few who have a solid and complete understanding of the other side,” notes John Humphrey, an old-style broadcast engineer. “The question seems to be: ‘Will they learn video faster/better than we can learn IT systems?’ The first person to be a true ‘hybrid’ … wins!” This is an observation that is truly remarkable, when considering that even an IT director should have the digital part down while maintaining a hold on analog systems. There would be no argument that a hybrid engineer is the perfect fit to replace the type of technician that has been depended-on for decades.

But not everyone in the field of broadcast engineers feels this way. For example, as the National Association of Broadcasters (NAB) Trade Shows try to combine the best of both IT and old broadcast engineering worlds, some believe it has trifled with its true origins. “NAB is no longer a Broadcast Expo,” claims Bob Griffiths, a broadcast engineer. “The Broadcaster has been broadsided by the computer et al genre. May we rest in peace.”

Don’t hang that wreath just yet. There is a cut-off of people who were lucky enough to catch the tail-end of the old-school broadcast engineering training and transcend into the new digital age. While the industry has definitely made a huge turn towards information technology, it is the sentiment that the typical IT director has no clue what they are doing when it comes to the wisdom from the past. In order to survive in this new world of broadcast engineering, the new dawn needs a sort of hybrid engineer, touching upon both IT and audio/video engineering areas.

Many companies (advertising agencies, in-house production departments, even television stations) believe that they can survive with just an IT person. They all learn the hard way; if they are stubborn, the end product will truly suffer and it’s obvious when that happens. TRUE STORY! – There was once an IT guy (a CTO of a huge corporation) who thought that the video router was a “router” as in “IP Router!” Where was the broadcast engineering know-how that he so desperately needed?

“I think there is a fundamental difference between ‘IT’ guys and ‘Broadcast Engineers,'” opines Robert Getsla, obviously of the old ways. “Probably the easiest way to describe that difference is to ask a prospect if ‘5 Nines’ is ‘good Enough?’ The answer is, only if over 5-minutes of outage per year is acceptable. For many in the Broadcast world, 5 minutes per year is not acceptable.”

Luckily, there are enough future-sighted broadcast engineers who, knowing a good thing when they see it, jump on the band wagon to improve their job security by also training in the IT side.

“I have to agree that IT and broadcast engineering are merging, albeit at a slow pace,” observes Shane Pechacek, an old-type broadcast engineer who is making the transition to the new IT arena. “I started as a production systems engineer; then, about 4 years into it, I saw that equipment was changing to use more commodity hardware rather than proprietary, and were becoming more IT based. I just finished my degree in software architecture and I can say I am really glad I went that route. I am now the only one in our company that knows both the broadcast and IT side and it makes my job A LOT EASIER being able to do that. Right now, a consultant was hired to look at how the industry is moving in technology and whether or not to merge the IT and broadcast departments (both our director of IT and engineering are retiring soon). Hard to say right now what they are going to do, but it kind of makes sense to start making that transition now rather than later.”

The consensus seems to be that the broadcast engineer must adapt to the new world the way it stands or go the way of the dinosaurs. The IT director must have an ample background in analog theory as well as its digital counterpart of the future. They must be a mixture or hybrid of both in order to survive. Only this new position will continue in the vast global marketplace of today and tomorrow.