Walker teamed up with China and Malaysia-based multimedia content creators Super Bonfire Group and UK-based xR specialists 80six to perform a live five-song medley across five different digitally-realized locations, featuring singers Au/Ra and Torine. With only three weeks to execute the project from conception to its public debut, production was split across three time zones, and work continued 24 hours a day with at least one team on the job at any given moment. 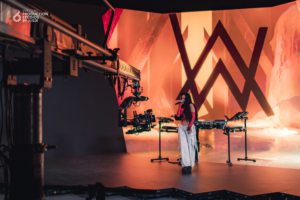 “The fact that multiple teams across the globe were using the same disguise hardware and interface meant we could troubleshoot together across different teams,” says Super Bonfire CEO Jason Kirby. “The workflow also allowed us to build in a lot of flexibility across both the Unreal Engine and Notch projects, which gave us more room to improvise and maneuver when shooting on site.” 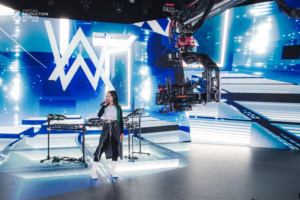 Across the ocean, 80six built a custom xR stage for the shoot made with ROE Visual LED wall and floors running on Brompton Technology and ROE Evision EV4 for image processing. The xR workflow was powered by two disguise vx 4 and four rx II media servers working with Unreal Engine and Notch graphics engines as well as Mo-sys StarTracker as a camera tracking system.

Part of the challenge came in creating a sense of scale around Walker and the singers, who were frequently shown in long shots flying through space or performing in great ice halls. The team used disguise’s virtual zoom feature and created AR drones that captured the performances at an artificial distance. 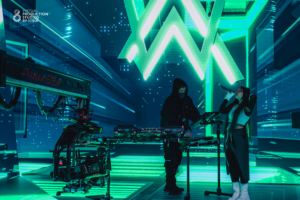 “With virtual zoom, we created a variety of complex camera movements by zooming in and out or panning beyond the physical constraints of the gimbal and Technocrane, creating an enhanced virtual performance space,” says 80six Head of Virtual Production & Real-Time Technology, Paul Nicholls. “Additionally disguise’s color calibration has particularly improved with the latest release, speeding up the workflow and taking us less than ten minutes to get the color calibration done”.

Despite the limited production time, the virtual concert was launched on NIO Day to massive success, with over 3.6 million views and counting.

“The results we achieved were some of the best to date,” says Kirby. Kirby also believes the disguise solutions are a requirement for Super Bonfire’s top-level projects: 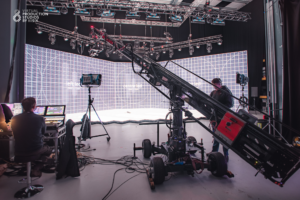 “It’s always good when we get to work with disguise! The back-end support from them has been great and we learn a lot from them every time we do a project. There is so much support available. Not only technically, but also through the wider disguise network. Being a part of it gives you access to a world of industry leaders in this field. Without the support from disguise, this project would not have been possible,” says Kirby. 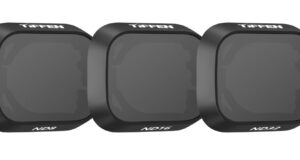