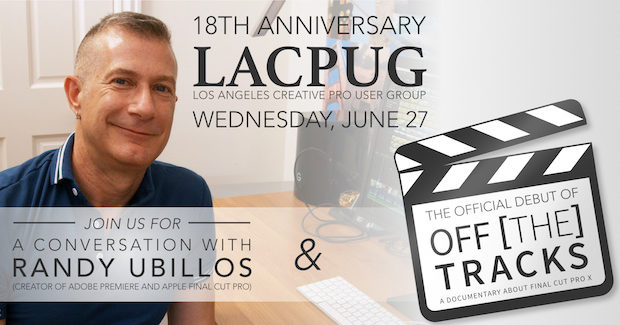 On Wednesday, June 27th, The Los Angeles Creative Pro User Group, (LACPUG) will celebrate its 18th Anniversary at the Gallery Theater in Hollywood, CA beginning at 6:45PM. The event will feature the official movie debut of Bradley Olsen’s (whom will be in attendance, and will be hosting a question and answer forum) OFF THE TRACKS, a documentary about Final Cut Pro X. OFF THE TRACKS is a crowd funded project which focuses on clearing any misconceptions of the award winning FCP X video editing platform.

“This documentary features exclusive interviews with the creative professionals who use the software and the developers who created it. Why did Apple make Final Cut Pro X? With misinformation running amok, Off The Tracks aims to clear the air once and for all.” stated Brad Olsen

In attendance (and subject to availability) will be the original FCP team of Michael Wohl, Tim Serda and Paul Saccone who’s work changed the world of non-linear editing practices. FCP creator Randy Ubillos  (who also created Adobe Premiere, Aperture, iMovie  08, and FCP X) will be joined by LACPUG head Michael Horton will discuss the history behind the early years of FCP and how FCP played a major role in the digital revolution!

Get your tickets for only $10.00 which are on sale now at the LACPUG website.The night will be fill of food and drinks and of course, the “World Famous Raffle.” Don’t wait, becase tickets are selling fast and capacity is limited.

“This is going to be a wonderful celebration and a very special night,” says Michael Horton, founder and current head of the group. “Anyone considering being a part of this event should get their tickets soon.”

The Los Angeles Creative Pro User Group, (Formerly the LA Final Cut Pro User Group) was established in June of 2000 and now boasts a total membership of over 6000 people worldwide. LACPUG meets once a month in Hollywood, Ca. where it attracts 200-250 people a meeting. Headed up by Michael Horton, LACPUG is the largest User Group dedicated to digital storytellers in the world. www.lafcpug.org/user_schedule.html