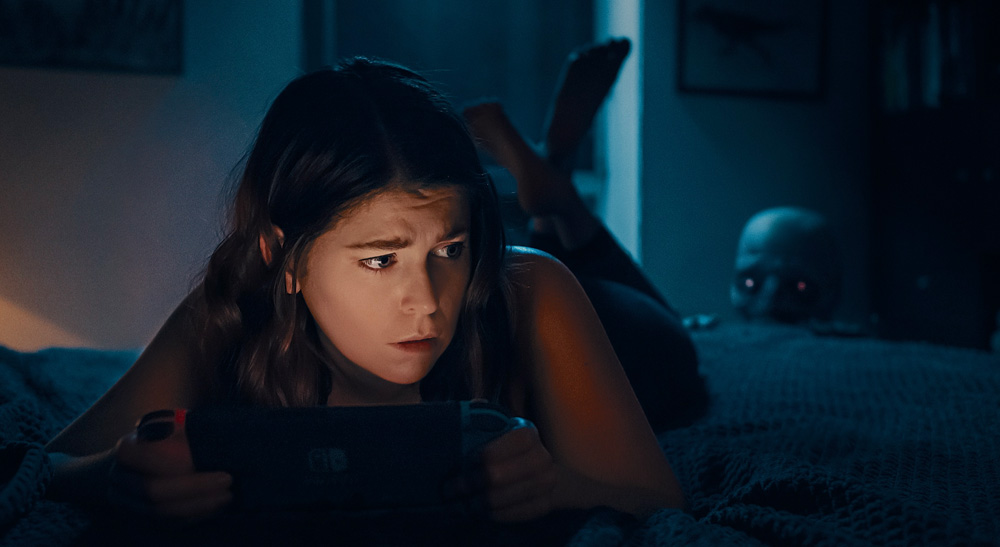 Fremont, CA – April 15, 2021 – Blackmagic Design today announced that the SXSW award winning short film “Don’t Peek” was shot on the Pocket Cinema Camera 4K by Julian Terry during quarantine in 2020. The horror film, which was also graded using DaVinci Resolve Studio, was bought by blockbuster filmmaker Timur Bekmambetov and will be turned into a full length feature film.

“Don’t Peek” follows a young woman, played by award winning actress Katie C’etta, who discovers a frightening Animal Crossing character intent on crossing into the real world. The short film premiered at SXSW 2021 and was quickly bought to be turned into a feature film.

The film’s set was Terry’s Los Angeles apartment and the production gear used was limited to the Pocket Cinema Camera 4K, a small slider, two small lights, and a Nintendo Switch, which was also used for lighting on a number of shots.

“There was a lot of time to do some writing, and not surprisingly also time for playing video games. I started to think about an idea for a horror film using something that people have been doing during covid as the main plot point. Then one night Katie was playing Animal Crossing and thought she saw something at the end of her bed. The film was born right there,” Terry said.

Constrained by quarantine rules, Terry, along with his roommate and fellow filmmaker Alexander Anderson, who produced “Don’t Peek,” had to come up with a way to shoot a high quality and properly creepy horror film within a single room in their apartment that did not have the space for extensive lighting or rigging. The low light capabilities and the small size of the Pocket Cinema Camera 4K worked perfectly to allow Terry to be incredibly creative with the shoot and allowing him to create the feel that the set was much bigger.

“Animal Crossing is such an innocent game. You see people happily holding Nintendo Switches up to their face, so the idea of taking something so innocent but showing it as terrifying was an idea I couldn’t pass up,” Terry said. “When we were testing the Pocket Camera and discovered how well it looked at ISO 1250, that was the ‘a ha’ moment for me. I realized with that level of low light capability that we could keep Katie’s face lit with just the light coming off of the Nintendo Switch itself. I never thought I would be able to count the light coming off a game console as enough for lighting a scene, but the Pocket let that happen.”

The shot of Katie holding the Nintendo Switch and watching her face react at first in amusement and then in horror to what was happening on the screen became the key shots for the film. To get the shot, Terry positioned the Pocket Cinema Camera 4K in between the Switch and Katie’s face. The small size of the camera also let Terry capture the room behind her, giving the viewer a greater sense of being alone in a dark room instead of just a close up of her face.

“This shot gave the perfect ambiance and creepy feeling, while at the same time let us work with the gear and lighting that we had available. And because the camera is so tiny, we were able to squeeze the camera in tight spaces making the room feel much bigger and increase the viewer’s sense of horror. We could look at her and around her to capture the darkness and shadows of the room behind her. Definitely not a shot we could have gotten with a larger camera,” he continued.

Terry shot using Blackmagic RAW, which he credited with allowing him to get even more details from the shadows around the room and with an easy post process. To grade the footage, he used DaVinci Resolve Studio.

“I was worried about creating a monster not only as a physical effect, but as one of the ‘animals’ in the game. For the physical monster, it was just Alex in his underwear, wearing a mask, and used Resolve to match the colors between his chest and the mask. For the creature in the game and in the room, we used Resolve to highlight the creature. The Blackmagic RAW to Resolve workflow was very easy,” Terry said.

“Don’t Peek” is scheduled to be turned into a full length feature in 2022.

“The Pocket camera and Resolve definitely helped with get the film noticed and bought because of it’s fantastic quality. As a filmmaker, you have to have the vision, talent and drive to create the film, and Blackmagic allowed me to take that and create that vision at Hollywood level quality,” he finished.