DPA Delivers Exquisite Sound With Its Tiniest Ever Microphone Capsules 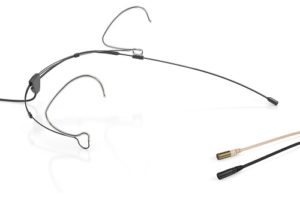 In direct response to feedback from the theatre, film and television industries, DPA Microphones is adding to its d:screet™ and d:fine™ ranges by introducing its smallest ever high end pro audio microphone capsule.

Launching in September 2018, the d:screet CORE 6060 and 6061 Subminiature Microphones and the d:fine CORE 6066 Subminiature Headset Microphone are just three millimetres in diameter – two millimetres smaller than DPA’s existing 4000 series of miniature microphone products. While they may be small, they pack a powerful punch in terms of performance as all three incorporate the company’s recently launched CORE by DPA microphone technology that reduces distortion and increases dynamic range.

Kalle Hvidt Nielsen, DPA’s CEO, is unambiguous about this new 6000 series of products, describing them as ‘without doubt, the best miniature microphones DPA has ever made’.

“Giving the market the most advanced technology and the best sound possible has always been DPA’s philosophy and compared to our existing 4000 series miniature microphones, the 6000 series represents a significant step forward.” He says. “Developing these products has been a massive undertaking and the amount we have learned has really strengthened our already exceptional R&D capabilities. We are proud to serve the market with such great tools.”

“The sound quality is everything you would expect from a DPA microphone and, despite their small size, their performance is similar to our 5 mm miniature capsules,” he says. “Indeed, their noise floor is lower and their ability to reach high sound pressure levels without distortion is better than any other 3 mm capsule on the market.”

Several years of research have gone into the development of these new capsules and during that time DPA R&D staff have visited theatres, film sets and television studios to learn first-hand exactly what their customers need from a miniature microphone.

“DPA has a big footprint in these industries, especially theatre where our microphones are regularly used on top Broadway and West End shows,” Moerch says. “Everyone wants the tiniest microphone possible so that they are less visible when worn as a headset and are completely invisible when hidden in costumes and wigs. Customers also want is DPA’s exceptional sound quality and durability, especially when it comes to cables that withstand damage and capsules that can be easily cleaned to remove stage makeup and sweat. Our 5 mm capsules already deliver on all these levels, so being able to offer a microphone that is just as good, but even smaller is generating huge excitement within these industries.”

Feedback from customers who have tested the new microphones has been unequivocally positive.

“The 6061 is the best miniature mic capsule DPA has ever made,” says Sound Designer Dan Samson, while Sound Designer Gareth Fry adds: “Not only does the sound of the 6000 series make me happy, but it’s smaller size means that the performers who are wearing them are happier, too.”
Sound Designer and long-term d:screet 4060 user Richard Brooker thought that switching to DPA’s new CORE by DPA amplifier technology was an unbelieveable step up in sound quality, but he now believes the 6061 series is even better – and smaller.

”I find it remarkable that we can achieve studio quality sound from a microphone that small,” he says. ”For me, it is the best miniature capsule DPA have ever made.”

Sound designer Gareth Owen is equally impressed, saying: “About once a week someone asks me when actors are going to have microphones surgically implanted in to their skulls. It was funny, for a while… The 6061 isn’t a surgically implanted bone-transducer microphone, cold-grafted to the temple, but at half the size of a 4061 and with the same great audio quality, it’s getting close.”

In terms of technical specifications, all three 6000 series capsules are omnidirectional and have a frequency range of 20 Hz – 20 kHz. The d:screet 6060 lavalier has a noise floor of only 24 dB(A), while the d:screet 6061 lavalier and d:fine 6066 headset have noise floors of only 26 dB(A). This is similar to the company’s existing 4000 series miniature mics. All three capsules are available in black and beige and more colours will be added at a later stage.

The d:fine 6066 also benefits from a completely redesigned lightweight, one size fits all headset that attaches over the ears for maximum comfort and has a spring mechanism to help it grip below the ears and to the side of the head for added security. With a fully adjustable boom, this new headset is very easy to fit and also has a redesigned cable attachment that allows the cable to run down the wearer’s back, so it can’t be seen.

“Our new headset is a major step forward because it is much more secure and comfortable than previous versions,” Moerch explains. “We gave our designers carte blanche to come up with something new and they have developed a product that exceeds everyone’s expectations. We are sure this new headset will be the preferred headset mic when people try it see it and hear it.”