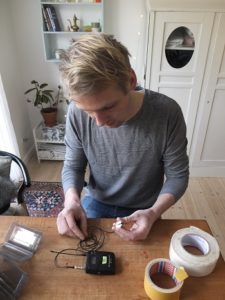 Danish sound designer and film sound recordist Malthe Bjørn Jensen likes DPA’s d:screet™ 4061 Miniature Microphones so much that he wants to eat one! It’s true – he really is curious to see what sounds he might capture if he swallowed one of these tiny mics.

While recognising that it’s probably best not to try this for real, Jensen says: “I’ve always been really impressed by the big sound you get from these very small microphones. Their small size makes them very handy – I often use them on film sets to record sounds in places where a bigger microphone wouldn’t fit.”

Jensen adds that having inconspicuous cables also makes them easy to hide. “For example, if I’m recording dialogue I work with the costume department to hide them in the actors’ costumes,” he says. “I usually use DPA concealers and a piece of fake fur to eliminate rustle, but sometimes, if the costume is tight, I use Bubblebee Invisible Lavalier Covers because they work very well. It’s also useful that the microphone’s grid provides a boost in the high mid-range, which is ideal when you are positioning the mic in a costume that muffles the sound.”

The sound quality Jensen gets from DPA lavalier microphones is often a useful back-up on a film set, especially when shooting wide angle shots where you don’t want to see a boom.

“I use a DPA d:dicate™ 4017B as my shotgun mic because it works really well with the d:screet™ 4061 Miniature mics,” he explains. “The way the sound balances between the two means that I have less work to do in post. I love the sound of this microphone – and the fact that it is lightweight on the boom is handy if you haven’t been to the gym for a while! It is good for outdoor recording and for indoors where longer shotguns don’t fit under the ceiling or where they pick up too much reflection and do weird phase things. I’ve also used it to record sound effects, usually with it mounted on a stand.”

Currently based between Berlin and Copenhagen, Jensen is mainly involved in film sound – both production and post. He also composes music for advertising and records voice over projects.

“There is a thriving short film scene in Denmark, with many of these films supported by the Danish Film Institute, Super 16 (a private alternative) and a few other smaller institutions,” he explains. “I’ve worked on various projects for the different institutions including one, Silent Night, that was directed by Aske Bang, produced by M&M Productions and nominated for a 2017 Oscar in the Short Film (Live Action) category.”

Jensen recorded location audio, sound effects and foley for Silent Night before moving on to another short film that was shot on location in the Norwegian mountains over the winter.

“Because of all the snow and the remote location, I am hoping that it will be a very beautiful sounding and quiet film,” he says.

With the sound for the Norwegian short film now in the can, Jensen is focusing his attention on the post production process.

“I’ve also got few other projects that need editing, so I am quite busy,” he says. “Once that’s done I shall be recording another short film using DPA microphones – and hopefully, after that, I’ll be working on something even bigger.”

ABOUT DPA MICROPHONES:
DPA Microphones is the leading Danish Professional Audio manufacturer of high-quality condenser microphone solutions for professional applications. DPA’s ultimate goal is to always provide its customers with the absolute finest possible microphone solutions for all its markets, which include live sound, installation, recording, theatre and broadcast. When it comes to the design process, DPA takes no shortcuts. Nor does the company compromise on its manufacturing process, which is done at the DPA factory in Denmark. As a result, DPA’s products are globally praised for their exceptional clarity and transparency, unparalleled specifications, supreme reliability and, above all, pure, uncolored and undistorted sound.
For more information, please visit www.dpamicrophones.com