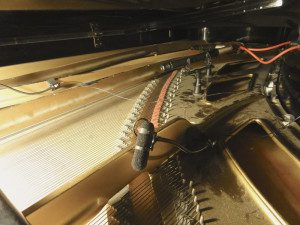 For this year’s show, Vicari depended on DPA’s d:dicate 4011A Cardioid Microphones and d:vote 4099 Instrument Microphones to amplify the large orchestra’s sound from its location under the stage and for the studio pre-records. In all, Vicari used two d:dicate 4011As and seventeen d:vote 4099 microphones for the production.

“DPA Microphones has been our go-to manufacturer of choice for the OSCARS for quite some time now and once again delivered a wonderful, pristine sound during the show,” says Vicari. “I haven’t found a better sounding clip-on microphone for instruments than the d:vote 4099, especially for string instruments of any kind. The string players had no problems attaching the mics on their own for both the soundcheck and the show. The d:vote 4099s and d:dicate(tm) 4011A mics I set up inside the piano worked perfectly. I was able to attach the mics with magnetic mounts and close the lid for isolation. The d:dicate 4011As I set up for the drum overheads gave Tommy Vicari, orchestra mixer, a great overall drum sound, including smooth cymbals.”

In fast-paced live shows, musicians take the time to run through their set multiple times before going on-air, and Vicari relied on his DPA mics to handle the chaos. “The orchestra musicians were in and out of the orchestra pit many times for show run-throughs and never had any problems. I depend on my DPA microphones to deliver excellent sound quality, and this performance was no different. Once the mics were setup we were able to lean back and enjoy the music.”

“The Academy Awards are one of the most-watched, prestigious events on television and we are thrilled that our microphones were used as part of the production again this year,” says James Capparelle, Marketing Manager, USA for DPA Microphones. “Dan Vicari truly cares about what he does and is passionate about delivering world-class results to his clients, and it is a testament to the quality and sound of our microphones that he continues to rely on DPA for events as renowned as the OSCARS.”