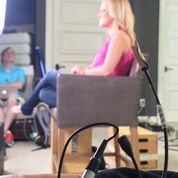 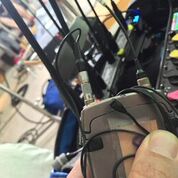 “In the audio industry, the past few years have been leading up to integration – great manufacturers’ products operating seamlessly together,” says McCoy. “DPA Microphones, Sound Devices and Wisycom create a trifecta of the highest-quality audio in the field, and I couldn’t be happier. I’ve been waiting for Wisycom to get into the United States for about 10 years and I enjoyed using the first wave of Wisycom product as an early adopter of the wideband, high input bias voltage and 24bit 96khz ADC dynamic technologies. When put together with DPA Microphones and Sound Devices, I was getting near perfect reproduction of the guitar and voice recordings. It was the closest I was ever able to get location audio sounding so similar to studio quality, which floored me.”

Since the show called for reality mixed with some live production (CMT Awards, USO Show, etc.), McCoy wanted to be extremely lightweight and efficient. He relied on his Sound Devices 688 recorder/mixer along with DPA d:screet™ 4061 Omnidirectional Microphones and his Wisycom base station, MTP40S Wideband Bodypack Transmitters, MTP41 Pocket UHF Transmitters and MCR42 Miniature Camera Receivers.

According to McCoy, “The talent needed a lot of fidelity, dynamic range and accuracy, especially because they’re humming, singing, yelling and whispering, accompanied by instrument playing, all in one scene. I was able to capture near exact sonic representation of what I was hearing through this chain. The accuracy of DPA Microphones, Sound Devices and Wisycom captured it all flawlessly.”

McCoy ran the primary talent on digital inputs, going out of the two main receivers into the two main inputs on the Sound Devices 688 recorder/mixer. He then used the remaining channels for supplemental dialog and audio, using the DPA d:screet™ 4061 mics on all the Wisycom transmitters.

McCoy credits his Sound Devices 688 for a smooth and efficient workflow from his remote location in Nashville to his post production facility back in Los Angeles. All of McCoy’s CompactFlash® cards from the 688 were shipped back daily. When he got back to the tech room each night, he would off-load his content onto a back-up drive and e-mail the sound report to post. When they received the discs the next day, they would know what was coming. As far as time code and talent label, McCoy used all the metadata and the notes capabilities of the 688, which facilitated his workflow.

The 688 features 12-channel automatic mixing capability thanks to Sound Devices MixAssist™ technology. MixAssist came in handy on this production during several scenes including a shoot at the Hill Billy Supper Club, where McCoy had to capture several people around a table in conversation. MixAssist was active on every single input and created sub-mixes incredibly fast. “MixAssist on the 688 was such a useful tool. It not only gave the mix to producers, who are directing the scenes and taking notes, but also the camera mix was really responsive to the dynamic range that only the MixAssist could give me,” continues McCoy. “Sometimes we had up to 11 open mics unscripted on the 688, and MixAssist was able to pinpoint, within milliseconds, which person was speaking up over the crowd and focused in on that mic. I was then able to seamlessly jump to the next mic that was in use. It is an excellent feature.”

As the primary engineer on the show, McCoy credits the DPA d:screet™ 4061 mics in allowing him to let the scenes play out and still be able capture dynamic audio, due to the mics’ high-quality audio and build. “We shot in very humid conditions where actors were sweating into the mics and the mics handled those conditions incredibly well,” adds McCoy.

In addition to recording, McCoy also needed to make sure he could pick up other conversations from sources that might not have been close to him. “With the Wisycom devices I was able to get solid frequency anywhere I traveled from Rosemary Beach, Florida all the way to Fort Riley military base in Kansas City. At Fort Riley, we were able to get clean frequencies at a range of 200 – 300 feet of line of sight. Additionally during an appearance at a baseball game in Tennessee, the Wisycom receivers picked up Kellie’s family and friends from about 500 feet away. Although I couldn’t see them, I was still able to hear the conversations and record those ISOs with confidence while we had a camera down there shooting the scene. The producers and production team were sometimes able to get 2-for-1 mixing because of the Wisycom and the 688 working together.

For the past 20 years of my career, I’ve been looking to have this simpatico match of best transducer, best RF front end and best recorder/mixer in a package that I could put on and bring anywhere in the world, and finally it’s arrived with these three manufacturers,” says McCoy.  “I’m a sound mixer and what I need is the best possible sound quality I can get, which is why I rely on DPA Microphones, Sound Devices and Wisycom in my day-in and day-out job.”

In all, the 53 days of audio captured by McCoy will be cut down to 13 half-hour episodes, now airing on the CMT Network.

Wisycom is a designer and builder of the most sophisticated RF solutions for broadcast, film and live production, renowned for their durability, flexibility, reliability, practicality and cost-effective price points. Wisycom’s design process is driven by attention to detail, customer feedback and ultimate quality, from the selection of components to the manufacturing process, which takes place at the company’s Italian plants. The company prides itself on serving as a technical advisor and partner to every customer. From custom design to evaluation and dimensioning of systems, the Wisycom team stands by its customers through every step of the process.