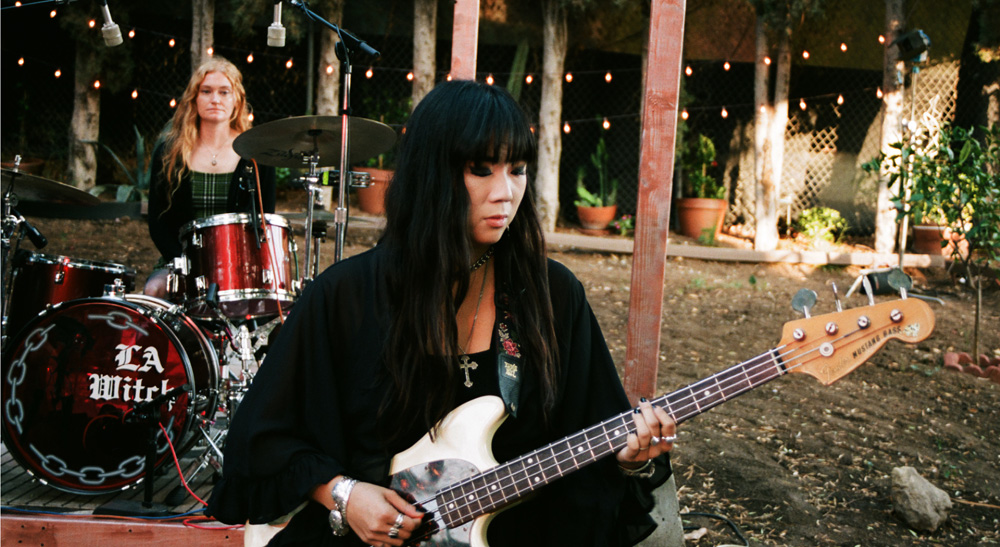 Director Alison Roberto was excited to be approached about the series by the iconic shoe designer. “Dr. Martens came to me and gave me the option to choose any scene in Los Angeles for the episode. I’ve always been fascinated with the Los Angeles punk scene and how punk resurges into the mainstream when we are in political and social upheaval.” Roberto pitched an idea that encompassed the challenges and trials of women in punk throughout the years, featuring veterans Exene Servenka (X) and Patty Schemel (Hole), as well as LA Witch and up and coming The Linda Lindas.

Roberto and long time collaborator and cinematographer Sebastien Paquet shot with their go to system, the Pocket Cinema Camera 6K. “We’ve had our Pocket Cinema Camera 6K for a few years now,” said Roberto. “This camera has completely changed the game for us in terms of bringing cinematic quality to lower budget projects. It is the only camera of such quality and depth in this price range.”

Having already shot a wide range of projects with the camera, from docuseries and music videos to worldwide tours, the team had developed several rig set ups for different styles of shooting which became critical for this shoot.

“The Pocket Cinema Camera 6K’s size, ease of use and versatility was very helpful on the set of this particular project,” said Paquet. “We sat down for hour long interviews with each of our talent immediately followed by run and gun style B roll on the streets of Los Angeles, like The Linda Lindas dancing and skipping through Echo Park. The Pocket Cinema Camera 6K made it possible for us to switch rigs and setups fast and capture beautiful moments very easily and quickly.”

While the story of “Dr. Martens Presents Redefining Feminism in Punk: Los Angeles” is as much about the new punk scene in Los Angeles, the shoot was not without some powerful moments for the veteran musicians featured. “One of the key scenes for this short doc was shot at the Whisky A Go Go,” added Paquet. “Returning to this iconic concert venue in Hollywood on the Sunset Strip for the first time since the pandemic hit was a very emotional moment for both crew and talent. It was even more special for Genny Schorr, guitarist for the band Backstage Pass, who had not stepped a foot in this venue since the band opened for Elvis Costello at the Whisky in November 1977.”

The final grade was applied by veteran colorist Ryan McNeal of RKM Studios, also a long time collaborator of Roberto and Paquet. “Ryan knows my style well and has the same tendencies, which makes our working relationship easy and fun,” said Roberto. “I always share visual and color inspiration and then tell him to just go for it. Ryan has given me the nickname ‘Barely Legal Saturation’ because I love pushing it to the limit in the grade.”

“Ali is a big fan of bold film like looks, so that is always our North Star,” said McNeal. “We wanted to feel texture and filmic curve to the exposure. I use a lot of still film photography as inspiration for that kind of look.”

McNeal is no stranger to working with Blackmagic camera imagery, and is always pleased to see footage from the Pocket Cinema Camera 6K. “I love the dynamic range. In working with a variety of lighting conditions it’s great to have all the necessary detail in the highlights and shadows.”

A part of the documentary is the use of VHS found footage as additional material that added a unique vintage statement. “The grittiness and imperfections of the VHS is something we very much planned,” said Roberto. “90’s music videos are a constant visual inspiration for me, and Dr. Martens has that Lo Fi, DIY feel to their creative.” McNeal insisted that the style of the footage remain authentic, while still playing a visual role in the rest of the film. “Ryan added grain and his magic touch and really made the footage look great,” added Roberto.

With the Pocket Cinema Camera 6K footage, McNeal applied his own unique style to the grade, using a variety of tools built into DaVinci Resolve Studio. “I’m a big fan of the Glow OFX plugin. It is really robust and can accomplish a lot. I prefer soft, diffuse highlights and subtle halation. The other tool I use is the Color Space Transform plugin, which is an excellent tool to unify all the media into a common working color space.”

Roberto is pleased with the film, and the opportunity to share a strong point of view about punk rock and its strong female history, which continues through to today. “Punk’s DIY and rebellious attitude is becoming a rally cry for those yearning for societal change,” said Roberto. “The marriage of these two things is undeniable. Womxn in music have a lot up against them. This film showcases their strength and rebellion from the very first all female punk band in LA to the youngest and newest that are making the biggest waves. This story has something for everyone, even if you are unfamiliar with punk.”

Product photos of Blackmagic Pocket Cinema Camera 6K, DaVinci Resolve Studio as well as all other Blackmagic Design products, are available at www.blackmagicdesign.com/media/images.