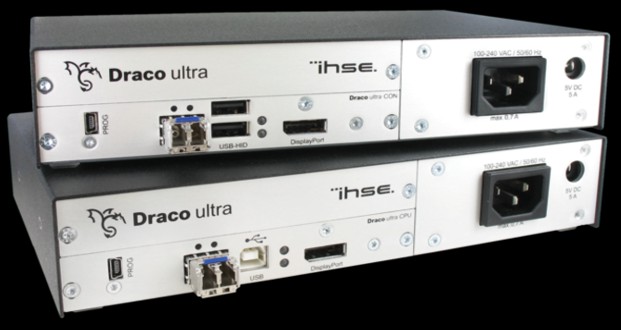 It’s amazing how video games have been incorporated into our modern culture so much so that they have adopted a wider form of entertainment for gamers. In the beginning, being a gamer was more of a personal and private form of entertainment. Now, with the rise of streaming platforms like Twitch Tv, anybody can make a career of becoming a “professional gamer,” which is a term that would’ve sounded ridiculous over a decade ago. But now, with the rise of professional gaming, there has also been a higher demand for higher fresh rates, which is something IHSE USA’s Draco ultra DP enhances.

Since 1984, IHSE has been a leading developer and manufacturer of advanced KVM devices in global demand. KVM stands for Keyboard, Video, Mouse, and the technology allows for the switching, extension, and conversion of these three primary computer signals and many else, e.g. DVI, HDMI, digital audio or USB. IHSE develops and manufactures switches for operating and switching between computers and consoles, as well as extenders for visually lossless signal transmission. This company’s innovative mission has supported next-generation distribution products for KVM and video signal extension. Their technology is deployed globally. Both public and private organizations, which include broadcasting, post-production, government/military, medical, air traffic control, financial, and oil & petroleum industries.

The Draco ultra DP Now is the first DisplayPort KVM extender with support for 144 hertz and 240 hertz refresh rate. The device constitutes a new generation of digital KVM signal extension, and it does this by using the innovative Lightweight Image (Lici) codec, which was developed in cooperation with the Fraunhofer Institute for Integrated Circuits. This type of coding software produces a brilliant image quality at the highest video resolutions along with an incredible color accuracy that is deep color-ready. The extender solution allows users to operate CPUs from devices at a remotely located workstation, whilst supporting DisplayPort video devices, keyboards, and pointing devices over a single duplex fiber cable. It can also extend resolutions in 32:9 at 144 hertz or 16:9 at 240Hz up to 5Km. The Draco ultra DP Now has built-in USB-HID supporting gaming keyboards, and these devices provide professional gamers with ultra-fast response times. The great thing about IHSE’s Draco ultra DP Now Gaming Extenders is that where the more traditional KVM extenders placed a hard cap of 60 frames per second between an extended cable connection, this revolutionary coding technology provided brilliant image quality at the highest video resolution with outstanding full 30-bit color depth and 4:4:4 sampling.

Additional benefits of the Draco Ultra DP include an ease of setup for remote gaming stations, and this is during staging and competition while removing noisy CPU’s from the desktop command center. The Ultra-fast response time resulting from the extenders offers an uninterrupted lag while equally eliminating tearing. They also transmit the refresh rate transparently between the graphics card and monitor. The Draco Ultra DP also supports audio transmission via the DisplayPort interface, which takes away the need for additional audio modules and enables for playback of the audio signal on monitors with integrated loudspeakers. It is also possible to integrate optional Draco vario mezzanine modules for digital audio input and output and for data signals, which include USB 2.0 and RS-232 / RS-422 when upgraded to a larger enclosure.

Additional features of the Draco Ultra DP include:

Learn more about the Draco Ultra DP and IHSE by visiting www.ihseusa.com/.