Bad Homburg – October 13, 2022 –  Maxon, developers of professional software solutions for editors, filmmakers, motion designers and visual effects artists, is delighted to congratulate  Jules Otway, Mortal Shores and Indrajeet Sisodiya, who have each been announced as the winners of the Pug Forest Challenge. Organized by multi-award-winning motion graphics artists and regular presenters at Maxon’s 3D and Motion Design Show, EJ Hassenfratz and Jonathan Winbush, the challenge was created with the aim of getting artists to use Unreal Engine for the first time. Participants were provided a scene file of a pug statue and preset camera animation, and were tasked to build out their own world inside of that frame.

“We created this contest, challenging artists of all skill levels to learn Unreal Engine alongside us, to help inspire people to try new things and instill a sense of curiosity in them,” says contest co-creator and creative director at School of Motion, EJ Hassenfratz. “It’s always difficult to try to learn a new software because it can be hard to know where to begin. Often artists are overwhelmed by the possibilities and don’t even start at all. That’s why we were so thankful to have Maxon sponsor this challenge, as their tools make animation accessible to a wide range of artist capabilities: Cinema 4D is easily one of our favorite tools because of its ease of use. Maxon has always had such an important role in helping to foster an amazing community and has been a massive supporter of artists like Jonathan and I, and we are grateful to have their help upskilling and growing this community further.”

Hassenfratz and Winbush built the pug statue, camera animation, and template for the contestants to use in Maxon’s Cinema 4D, and then brought those assets into Unreal, showcasing how Cinema 4D users can utilize the tool in their own workflows. The Cinema 4D integration with Unreal allows artists to easily create 3D models and animations using Maxon’s industry-leading tools and to incorporate offline-rendered elements and then import these files directly into Unreal.

With Cinema 4D and Unreal Engine being widely used in the motion graphics, games, or other real-time content industries, the duo set out to educate their audiences on the artistic potential of these tools. They put together tutorials and helped to guide first time users through the required workflows needed to create their scenes. The competition, which closed at the end of September, received submissions from a total of 88 artists, producing over 10 minutes of content.

“The final result was really incredible to see,” says contest co-creator and founder of Winbush Immersive, Jonathan Winbush. “It was so inspiring to see the wide range of works that were submitted, especially when you factor in that many of these submissions were from artists who were taking their first steps in Unreal Engine! We can’t wait to see how they all develop their skills moving forward and what entrants come up with for our next challenge.”

Jules Otway’s approach with his entry “Quality Time” was to keep the real story of what is happening between the lines. Believing the most powerful storytelling happens in the imagination of the audience, the scene simply shows a man sharing a beer with a buddy (the pug statue), with the context of what is implied to be a gravestone. Creating a rich backstory in what is left untold of one man and his dog, his best friend – the kind of bond you share a beer over.

“Creators like me are very, very lucky,” says Otway. “We’re standing on the shoulders of giant companies and content and tutorial creators like Winbush and EJ who raise the skill set of the whole community. We’re able to leverage the collective skill and knowledge of hundreds of incredibly talented people to make basically anything we can think of, and I think that’s pretty neat-o.” 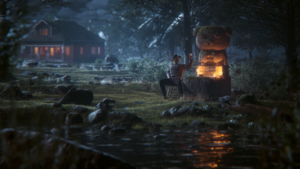 Connor Buchanan, aka Mortal Shores, aimed with his entry, titled “Rebirth Of The Pug,” to create a bright, yet mystical scene with a contrasting color theme away from a traditional forest palette. Having worked with the Unreal Engine MetaHuman framework extensively over the last couple of months, he used these skills to provide a secondary action directing viewers towards the godly and mythological resurrection and restoration of the pug, with a cloth simulation giving the scene the “standing on a cliff’s edge” dynamic. 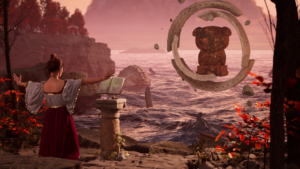 Indrajeet Sisodiya decided to take the Pug theme to the next level with his “Overactive Imagination” entry, where a small pug decides to challenge the stone Pug Lord statue in the Mayan Pug Temple. Demonstrating the often overly dramatic emotions of dogs, his video switches from the dark and theatrical, thunder-rumbling scene of the dog’s perception, versus the whimpering barks echoing off the sunlit statues in reality. 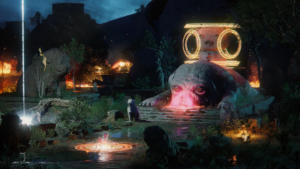 Maxon commends the competition runners up, Tuomisto Tatiana and Wonsa, as well as everyone who entered. The winning entries received prizes from the competition sponsors: Maxon, Puget Systems, Leia Inc, Epic, and The Pixel Lab.

To view the entire submission montage, including the entries from the winners and runners up, visit Winbush’s YouTube channel here: www.youtube.com/watch?v=pzO2rS_5EEQ