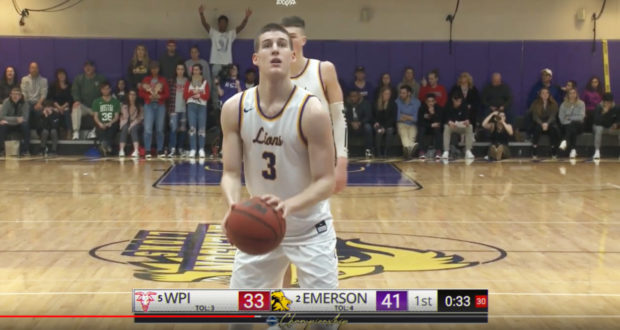 The BPswitch anchors the control room in the Bobbi Brown and Steven Plofker Gym, which hosts all home games for men’s and women’s basketball as well as men’s and women’s volleyball. The control room is located a floor above the basketball court, and is designed with a traditional three-row setup. Tim MacArthur, associate director for media technologies and production, said the college is exploring the idea of using the BPswitch-based control room for remote productions of other campus sports as well.

“The big draw for us was getting into BPfusion for graphics and the integration with the Daktronics scoreboard,” explained MacArthur. “The all-in-one device was also very appealing to us. There is a real ease of workflow with Broadcast Pix.”

BPfusion is a software option that works with BPswitch’s integrated NewBlueNTX multi-layer 3D motion graphics CG to streamline the creation of data-intensive graphics for sports, elections, and more. It uses templates to create customized graphics that update automatically using data from scoreboards, RSS feeds, and other IP-based sources without re-keying the data.

“The ease of use of the NewBlueNTX was another big draw,” MacArthur added. “The graphics are a step up from what we’ve done in the past, with easily modified templates that look great.”

All four of the switcher’s outputs are used to populate monitors in the control room, including two large panels in the front of the room and individual monitors for the TD and audio stations. MacArthur said the BPview™ integrated multi-view was customized for sports production, but there is a separate layout for an awards gala that is hosted in the gym every April.

While the students do not use the BPswitch’s file-based macros during productions, MacArthur said there is one macro that preps the switcher for production, so there is a consistent look no matter which student is serving as technical director. Coverage is produced in 720p and streamed live to the Emerson Lions YouTube channel.

There are dozens of sports productions throughout the school year, all produced with volunteer student crews. There is also no formal instruction for the BPswitch (or any other video equipment) in the gym’s control room. Instead, student volunteers teach themselves and each other how to use the equipment.

According to MacArthur, typical games have a three-camera setup with play-by-play and color commentators along with instant replay. Some games have as many as six cameras as well as a sideline commentator, but even single camera productions are run through the BPswitch to take advantage of the BPfusion graphics.

About Broadcast Pix
With a tightly coupled switcher and 3D motion graphics CG, Broadcast Pix provides the most fully integrated live video production systems with patented control and automation technology. From compact units to large-scale, multi-system solutions, every Broadcast Pix features an extensive toolset that makes it easy to optimize and customize your workflows locally and over IP. Plus, its BPNet ecosystem provides secure cloud services and asset management. Founded in 2002, Broadcast Pix has customers in more than 100 countries and is the leader in fully integrated production switchers for government, broadcast, streaming, live event, and visual radio applications. Learn more at  www.broadcastpix.com.