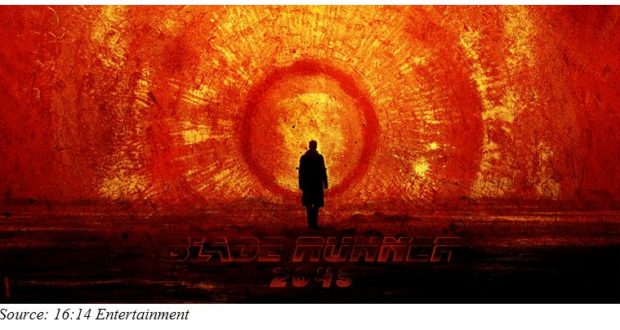 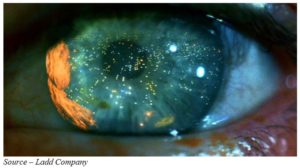 “I’ve seen things you people wouldn’t believe. Attack ships on fire off the shoulder of Orion. I watched C-beams glitter in the dark near the Tannhauser gate. All those moments will be lost in time… like tears in rain…” Batty, Blade Runner, Ladd Company, 1982

Soon after the release of the Blade Runner remake, SMPTE (Society of Motiion Picture and Entertainment Engineers) held their annual conference to solve todays problems but also forecast what the industry will be doing in the years ahead to produce, share, distribute and get paid for the content folks will enjoy.

They were all right!

It’s time for a change.

Trouble is all of the SMPTE speakers had great visions of what that change is going to be:

But whatever tomorrow holds it’s going to be big, huge even! 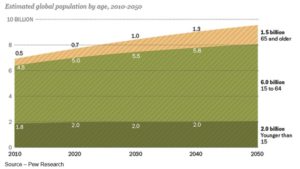 Sweet Spot – The majority of tomorrow’s population will be in the sweet spot for marketers – millennials and post millennials.  They will have grown up never driving and very comfortable with AI and robots.  After a tough couple of hours of moving data around there will be nothing more relaxing than custom video content.

Equality – It will have been a long, slow slog to achieve true equality for people of all races and sexes, but the end will be in sight and if we’re fortunate it may have been achieved earlier than estimated.

While half of the global population might be discouraged, progress is being made; and by 2050, male and female salaries will be reaching parity

In the developed world, the gender gap will have narrowed to such an extent that salaries and rights will be pretty much equal for both sexes. Women will be playing a greater role in business, government and the content development/distribution industry than ever before.

Facebook Live, YouTube, SnapChat and a wide range of online services combined with 8K camera-connected devices will give everyone a platform to express themselves and share their content with others (which can be modified).

It will primarily be the new Gen Cers, who have grown up in an ultra-visual world; who will be uploading as much as 1,000 hours of content every second (mainly 3-15 minutes in length) that will be viewed by billions every day over what is today called “social” media.

While some view each new generation’s preference for rapid-fire, short attention span viewing as a dim forecast for the future of large-small budget filmmakers, it probably won’t happen that way.

Visual Storytellers – While everyone can write/tell a story, there will still be those who have a creative passion to see things not exactly as they are but as they can be, should be, will be.  Their images will always be in demand.

Since the beginning of recorded time, visual storytellers and creatives have found a ready and eager audience in the vast population.

This won’t change with the flow of online streaming tidbits. In fact, it will heighten the demand for better quality and a broader range of content. What will be different is where; and even more so than today, how it is viewed.

The storytellers will be using very low-cost 16K UHDR/VR cameras to create immersive stories that people can simply sit and enjoy.  True to Andrew Shulkind’s keynote viewers will take control of the storyline and flow, bringing in and dispensing with real or animated characters.

Tomorrow’s visual entertainment will be a true creative collaboration.

On the upside for professional filmmakers, AI-based solutions will be closely tied to content metadata throughout the production process.  Piracy will be something your grandparents were concerned about because content will be tied back to the specific storyteller.

We will compensate individual “creators/modifiers” electronically and automatically for their efforts.

When individuals want to slip into strictly the immersed AR/VR mode, they will still don special personal gear even as some view them as a stumbling block to wide-spread acceptance.

The efficiencies of new and advanced software-based codecs will facilitate viewing on 8/16K televisions with new living room-centric viewing controls.

Research and engineering experts believe that for the foreseeable future (25 years), the devices or a neural transplant will be necessary for the AR/VR experience.

The latter isn’t on my shortlist.

Walls, Screens – There won’t be a need for today’s TV set or special screen to view your content because surfaces will be visually enabled and you will simply enjoy your personal channel of video content anywhere, anytime.

You won’t have to choose whether you’re watching on one of your communications devices; in your mode of transportation or your16K/HDR wall in your living room, family room, media room or bedroom.

Screens will be everywhere – office/home surfaces, modes of transportation, everywhere. An excellent example is Corning’s YouTube video – A Day Made of Glass.

It probably won’t be glass and they’ll be watching you as much as you are watching them.

In fact, even before 2050 there will be over 10B channels – one for every specific person/organization on the planet. And thanks to AI-based solutions and media analytics platforms, you’ll have access to any content anywhere.  Channels will be built around the things people do, where they go, their likes/dislikes, moods, relationships, interests … a rich, rewarding channel of one.

Want some content for a few minutes or an hour? Just say the word and the content system will deliver your channel instantly.

The difference will be that the AI-based solution will deliver precisely the ads you want to consume/consider/enjoy.

If you’re a little down, bummed, depressed; the solution will give you uplifting, morale building, confidence-enabling material and ads.

If you’re nostalgic, you’ll receive content from 2017 or 2027 and wonder how the old folks tolerated their world back then.

Whatever you’re feeling at the moment will be satisfied by the content you probably didn’t even realize you wanted. 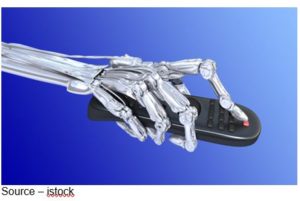 Tailored Viewing – With 10s of millions of hours of visual content for you to view; in 2041 and beyond, AI-based content management and delivery will pick the stories that you want to view based on your intellectual leaning, mood, mental state and your need to be entertained, educated or made aware of the world around you.  Satisfaction will only be a word or thought away.

The entertainment/content system will “flip through” millions of video files to offer you material to consider or to meet your specific needs at the time.  What’s offered up may not be right 100 percent of the time but all you have to do is say, “Nope, let’s try something else,” and BAM! it will be on your screen.

It won’t just be everywhere, anywhere TV, it will be individually personalized content.
Store Houses

At SMPTE some ultra-practical folks said, “B.S. If we have all of that data streaming in at 16K, 120fps for a one-hour film, you’re talking about10PB of storage per film. Multiply that by even, 1,000 hours of content per day and we don’t have enough cloud data centers to store it.”

Jen Soule of OWC and others in the storage industry were rubbing their hands together with the plans for resolution and contents growth.

It means a robust demand for storage as filmmakers, content managers and file distributors produce, gather and archive content from the four corners of the globe.

“VR, AR, holograms and 16K, HDR content production will produce a whole new set of digital assets that will be managed at the frame level and AI will be able to predict users’ wants and needs based on past behavior for a more fluid, intuitive experience,” states Allan McLennan of PADEM Media. “These available assets in storage will be mapped to the viewer’s behavior – personalized, private and detailed – and will accurately be presented seamlessly and close to instantaneously through AI”

The software, hosting and storage will move from single servers and monoliths toward distributed systems with fog-hosting (decentralized networking) that provide greater efficiency, reduced pressure on the networks and an improved user experience.

The challenge to date according to Microsoft’s lead researcher Karin Strauss is that electronic storage has not kept pace with storage demand.  She noted, “If you look at current projections, we can’t store all the information we want with devices at the cost that they are.”

Fortunately, the storage industry is keeping pace with the content industry. 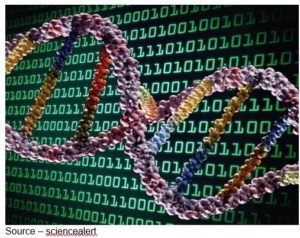 Massive Storage – To keep pace with the ballooning creation of content, storage engineers and scientists are already perfecting DNA storage that will store terabytes of content on a microscopic strain.  Content will be saved for thousands of years and the new storage solution will virtually eliminate the demand for massive data centers.

The future content industry requires both capacity and long storage life as well as speed.  As a result, flash/solid state memory will have a reprieve and will be used as local content buffer as the AI system determines the content desired and “preloads” content locally.

IDC predicted that the worldwide total of stored digital data would be 16 zettabytes (16 trillion gigabytes) in 2017.  Cisco estimates that by 2020, we will be producing 44ZB of data annually. 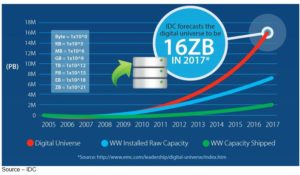 It’s Big – While having a terabyte of storage on your notebook or half a terabyte on your smartphone will be the answer to your needs, 8K, 16K, HDR and VR content will require expanded storage capacity; which is why by 2017, more than 16 zettabytes of content storage will be required.

A shoebox of DNA would hold roughly 100 ultra-large data centers.

While remarkably dense, human DNA is unstable but super-efficient in storing information that can be easily manipulated.

Strauss and other data scientists are confident that they can make it commercially viable (cheaper) over the next 5–10 years.

Storing data in DNA requires translating the 1s and 0s of binary digital files into long strings of the four different nucleotides – or bases – that make up DNA strands and write out the genetic code (already proven feasible).

Of course, it will also require a new breed of storage devices to write and read the content; but engineers and their AI assistants will be able to deliver them because … they can.

Over the next 10 years content will expand–and contract. It will become something that is universal and individual.

In our constantly connected, always-on world, communal venues such as theaters will disappear. Like-thinking people, regardless of where they are physically located, will connect and share ideas, activities and events. Interactively, they will create, modify and share entertainment content. Personalized content will be available to them wherever they go.

We will also find that we’re more alone together.

The creative minds of today are already giving us hints as to what tomorrow will look like.  “Entertainment” as we think of it today will be an instant, momentary escape from the here and now to the then and there.

SMPTE still has a lot of work to do. 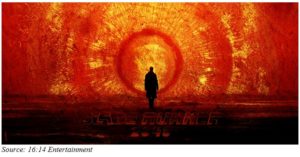 Just remember what Wallace will say in 2049, “Every leap of civilization was built on the back of a disposable workforce, but I can only make so many.”