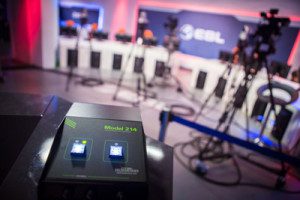 ESL produces and broadcasts professional video game tournaments to millions of viewers worldwide, alongside hosting numerous amateur and beginner tournaments both online and offline. A typical production for its TV department is similar to more traditional broadcasts, involving a studio set with competitors seated at computers, a large on-site audience, a main host and multiple commentators. Like many sportscasts, the crew and equipment travel from venue to venue throughout the year, covering esports tournaments for online streaming and other platforms. The main production challenge is configuring the system to meet the needs of each specific venue, which has often required large amounts of cabling.

According to Ben Cochran, audio engineer with ESL’s TV department, the company is currently upgrading much of its equipment to benefit from the latest technology. The Studio Technologies Model 214 Announcer’s Consoles were some of the first pieces of new technology the audio team purchased. Cochran reports that having the units on site, along with related Dante equipment and infrastructure, has transformed the company’s workflow. 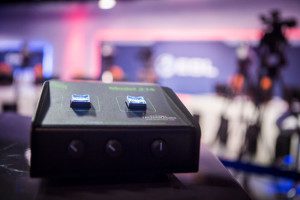 “We used to run several cables per console, which was very cumbersome,” says Cochran. “With the 214s, we use a network switch and plug a single Ethernet cable into each announcer console. After that, we can simply log onto a computer, see what is there and route everything with just a few clicks. It’s unreal how much less work we have to do now compared to what we did before. It has made everything much simpler, from requiring fewer cables when installing, to configuring and maintaining the system.”

In the week leading up to the largest North American event ESL has tested the technology on, Cochran was impressed by the support he received from Studio Technologies. “We had just gotten the 214s shipped to us, and Studio Technologies was more than helpful in getting us running and functioning to where we needed to be,” he says.

Using Dante(tm) Audio-over-Ethernet technology for the announcer’s consoles has proven to be a huge advantage, especially for the larger events. “The software that works with Dante shows the status of every single device, and we can edit the name of each device and route signals anywhere we need to,” adds Cochran. “It makes the setup so much easier.”

Beyond the benefits derived from the Model 214’s Dante networking support, Cochran is a fan of several additional features that enhance ease of use and field reliability. He says he and the ESL crew have come to appreciate the ease of changing the mic pre-amp gain, the robust power-entry connections and the brightly lit buttons, making operating in low-light environments much more convenient.

“Rather than having to flip DIP-switches with fixed gain stages, the Model 214 has two buttons and an easy-to-read display that provides a precise gain number, allowing an operator to increase or decrease the gain as needed,” says Cochran. “It’s also nice to have reliable 4-pin power plugs on the back because we’re setting up and tearing down big events with multiple announcer consoles, multiple times in a month, not to mention repeated packing and shipping of the equipment.”

The Model 214 Announcer’s Console is one of three Dante-enabled consoles launched by Studio Technologies. The units, including the Model 214, Model 215 and Model 216, are designed to serve as the audio control center for announcers, commentators and production personnel. Each unit integrates all on-air talkback and cue audio signal routing in a compact tabletop system, offering ease of use, configuration flexibility and sonic excellence. All three models support applications that use the Dante Audio-over-Ethernet media networking technology. An Ethernet connection with Power-over-Ethernet (PoE) or external 12-volt DC power source is all that is required to make the units part of a sophisticated, networked audio system. The connection of a microphone and pair of headphones or a broadcast headset completes the installation process.

About ESL
ESL is the world’s largest esports company, leading the industry across the most popular video games with numerous online and offline competitions. It operates high profile, branded international and national leagues and tournaments such as the Intel(r) Extreme Masters, ESL One, ESL National Championships and other top tier stadium based events, as well as grassroots amateur cups, leagues and matchmaking systems. ESL covers a broad field of services in gaming technology, event management, advertising and television production, fully catering to the needs of the esports ecosystem. With offices in North America, Germany, Russia, France, Poland, Spain, China, and partners in many other countries, it has a truly global footprint (www.eslgaming.com).

About Studio Technologies, Inc.
Studio Technologies, Inc. provides tailored, high-performance video, audio and fiber-optic products for the professional audio and broadcast markets. Founded in 1978, the company is committed to designing and manufacturing dependable, high-performance equipment that satisfies the needs of demanding users. Known for “designing for the way professionals work,” the company is recognized as an industry leader. Product categories include fiber-optic transport, intercom and IFB interfaces, announcer consoles and loudspeaker monitor control systems. Many products now include Dante-enabled Audio-over-Ethernet technology. For more information, please visit the Studio Technologies website at www.studio-tech.com or call 847.676.9177.