Once again faced with the complexities of bringing dynamic, invigorating coverage of an election to air, the broadcaster turned to LiveU, this time to deploy Air Control. Wijbenga said, “At the start of the project – elections for city councils – we discussed the approach of combining the best of a TV and radio show. We wanted to have an attractive TV show with the speed and dynamism of radio, covering as much of local city council elections as possible with as many interviews as possible. To be able to do that without having a reporter at every location where there was a possible interviewee, we needed to provide a stable connection to them in a simple way. And that’s where Air Control came in.”

Previously, unless reporters in the field were suitably equipped, and had the time and access, those interviews had to be handled by phone or audio app during a show like this, which were not broadcast quality in terms of management and interoperability as well as video calibre. Air Control made it easy for the broadcaster to have all video connections, simply, and all using a single, integrated cloud solution. They didn’t need to implement other hardware/software on the studio side. 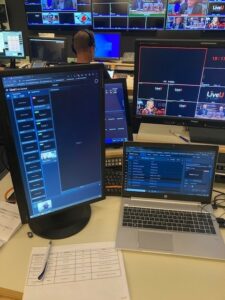 Wijbenga added, “Besides the 10 reporters in the field that connected via their LiveU bonded transmission units/app, we had one LiveU receiver especially for Air Control. A few hours before the show, we invited all the different city council spokespeople to the Air Control solution and we quickly tested the video/audio. During our live show, all the spokespeople could connect to Air Control as soon as they had preliminary results of the elections. Omrop Fryslân could talk to interviewees via a simple USB headset on a laptop and could then effortlessly switch that feed to air, if desired, without having to use non-broadcast systems like Teams or Zoom. We are very grateful to both LiveU and Heynen, providing us with not only the cloud solutions we need but also supplying the service required to get these up and running quickly. Air Control is easy to use, reliable and provides very good on-air quality.”

Zion Eilam, VP Sales EMEA, LiveU, said, “LiveU is already proving itself in the cloud domain, creating cloud workflows and ecosystems, and partnerships with key cloud service providers across the industry, that sit at the heart of all our IP futures. We’re really pleased to see the first European use of Air Control, with the complexities and speed of election coverage clearly benefiting from our new orchestration tool as we’ve also seen with our IP distribution solution Matrix during other elections.”