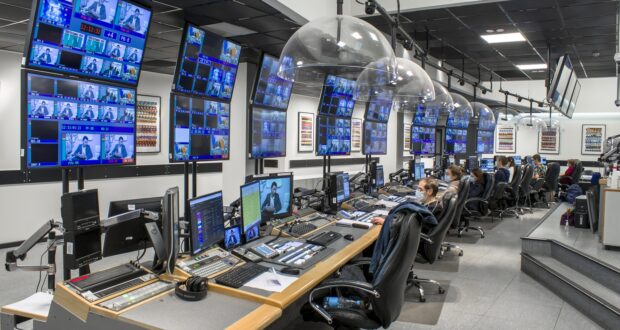 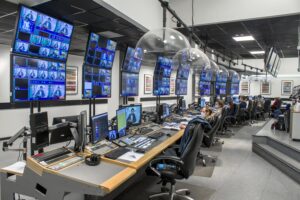 Channel One, Russia’s premier television broadcaster, has made the leap from HD-SDI technology to full IP after installing an Evertz Mediator playout and content distribution system at its Ostankino Technical Centre in Moscow.

The system, which incorporates the latest state of the art broadcast technology, is a powerful and highly integrated ecosystem that spans a large number of workflows. It is now being used to broadcast 12 channels of news, sports and entertainment to more than 250 million viewers worldwide.

Over the last four years, the Ostankino Technical Centre has been transferring its own technical infrastructure to IP, using Evertz SDVN technology and equipment. Continuing to adopt this more modern approach to video/audio stream routing and transmission was just one reason why Channel One decided to upgrade its playout facilities. Other factors included doubling the number of channels broadcast from six to 12, a desire to transition to ‘channel-in-a-box’ technology for on-air programs and a need to improve compatibility with the output format requirements of satellite and cable providers. Channel One also wanted to improve its playout system integration with its business applications and make maximum use of complex graphical capabilities.

System integrator OKNO-TV and its service company Telerent worked with Evertz to implement this project. Dmitry Sheykin, Project Engineer for OKNO-TV and technical director of Telerent, says a number of vendors were considered but the decision to use Evertz technology was based on prior good experiences with the company.

“Channel One and Evertz collaborated previously on the installation of a special 4K Channel with Dolby Atmos that was built for the broadcaster’s coverage of the 2018 FIFA World Cup,” he says.

Igor Yadykin, Deputy Chief of the Technical department at Channel One, says: “Making major changes to our playout facility is not something that we do often so we wanted to be sure it was a good investment. We are now the first broadcaster in Russia to embrace SMPTE ST2110 (IP) and we have modernized our channel distribution and playout by installing a more software driven, adaptable workflow.”

For the IP infrastructure, OKNO-TV installed two Evertz EXE routers (main and backup) with MAGNUM SDVN and Client Host servers. An EQX router with MAGNUM were also installed for ingest.

Igor Yadykin adds: “The new playout system was created for our Channel One time zone channels, of which there are 12 – each generating SD and HD signals at the same time. Previously, some of the time zones were doubling up but when we changed the system, we added five more hourly zones so that each zone had its own playout. We now have full redundancy, with separate racks and equipment for each channel, plus two spares.”

Moving to new technology required re-training for over 200 people whose roles covered ingest and archive as well as playout.

OKNO-TV’s Dmitry Sheykin says: “Getting to grips with the new system was initially challenging, but once staff understood its capabilities, they were delighted by what it could achieve. The main highlight is having all control of the processes of air correction and modification carried out through a modern HTML5 web client. In the automation system’s client application, users can now schedule and view a copy of the broadcast programs in low resolution with accuracy up to the frame.”

Robert Peter, Evertz VP of International Operations, adds: “The Channel One project was a steep learning curve for everyone, and we are delighted that this close collaboration has allowed us to meet our customer’s requirements. It is satisfying to know that our Mediator system has been so well received by a broadcaster that is internationally renowned for its very high technical standards.”