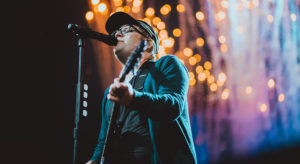 Since bursting onto the scene in 2005 with the hit single, “Sugar, We’re Goin Down,” Fall Out Boy has been topping the charts with hit songs like “Dance, Dance,” “Centuries,” and “Uma Thurman.” The band released its latest album MANIA earlier this year, and just this month wrapped the sixth and final leg of the MANIA tour featuring openers Machine Gun Kelly and other supporting acts.

The Pocket Cinema Camera 4K was used at the front of the house to capture a wide angle shot of the stage, along with a Blackmagic Video Assist 4K monitor/recorder, which Robb used to record each show in its entirety so he and the band members could review each show afterward. The URSA Broadcasts were set up throughout the upper sections of each venue to capture various views of the stage, and the team used URSA Studio Viewfinders and URSA Viewfinders in conjunction with the cameras. Blackmagic Camera Fiber Converters and Blackmagic Studio Fiber Converters allowed the team to run all necessary connections from the URSA Broadcasts to the engineering racks backstage.

“Blackmagic Design has been able to do amazing things with cameras and image sensors,” said Jibson. “The Pocket Cinema Camera 4K works incredibly well in the ever changing lighting in a concert setting. The URSA Broadcast cameras allow touring productions to utilize familiar controls while adapting the brilliance of the Blackmagic Design family of image sensors into a convenient package that reduces the footprint of traditional ENG cameras by 75 percent. This is important for venue sightlines and ticket sales, which ultimately affect the bottom line.”

In addition to the URSA Broadcasts, the workflow also featured several more Blackmagic Design components, including 10 Micro Studio Camera 4Ks positioned on the stage and center walkway for POV shots. All of the cameras were fed into the ATEM switching system and ultimately into two Mac Pros on the engineering racks for content and live generative effects, which were then fed into a Teranex AV to convert the 2160p feeds to 1080p HD-SDI signals destined for the LED screen processors. The ATEM Camera Control Panel allowed the team to control all five URSA Broadcast cameras and all ten Micro Studio Camera 4Ks from backstage. Blackmagic Design’s ATEM 2 M/E Broadcast Studio 4K, MultiView 16, and Smart Videohub 40×40 and Smart Videohub CleanSwitch 12×12 routers were also used on the tour for live switching, monitoring, and routing.

“The ATEM Camera Control Panel brings engineering familiar controls to the URSA family of cameras to give our touring video engineer Nick West control over the iris and black point while allowing our camera operators to focus on the appropriate framing and composition of the shot,” said Jibson. “The unit ties in seamlessly with the ATEM family and allows for all the control in just a quarter of the space.”

“The combination of the URSA Broadcast, ATEM Camera Control Panel and fiber converters worked so well for our touring needs, as everything helped to streamline our setup. The URSA Broadcasts provide a lot of dynamic range and the ATEM Camera Control Panel is portable, easy to use, and powerful. Plus the Pocket Cinema Camera 4K and Micro Studio Camera 4Ks are inconspicuous yet still produce amazing images. This was our best, most dynamic, and most cinematic tour yet, and we owe it to the Blackmagic Design products!” concluded Jibson.