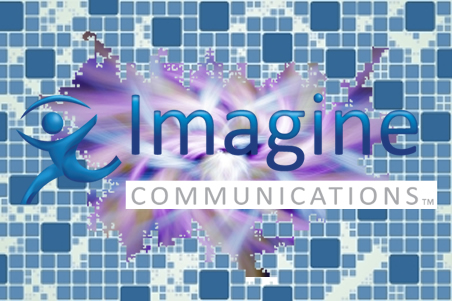 Times they-are-a-changin; while file-based workflow has been around for a while, the traditional tape-based workflow is fading in popularity, as much of the recordkeeping and content management shifts to a more digitally-inclined IT-centric infrastructure. Some cloud archival sites may store content on tape that allows high density data storage; but in the studio itself, the general trend is toward automating digital file based workflows, especially given the fact that many studio’s belts are tightening and new equipment is oft targeted early in the broadcasting ‘diet.’

Efficiency promotes savings in any post-production and broadcasting environment and file-based workflows help enhance efficiency. The natural urge for the smoothest workflows has lead to the invention of formats and software that facilitate just that. One such file format designed to be primer interchange format is MXF.

MXF (Media Exchange Format) might be considered an envelope into which the virtuality of your all important content is placed. It was designed by several companies working together in full co-operation to produce the most efficient method for the exchange and handling of broadcast files. It was developed by broadcast professionals for broadcast professionals as a method for the interchange of audio, video, and meta-data. There are two primary versions of this format. Avid and Panasonic use the OP-Atom version of MXF; in this format, audio and video are kept in separate files. Sony uses the OP 1A version of MXF, which weaves the audio and video components together for storage in a single file.

Despite the utility of editing systems ‘speaking’ several different formats, numerous products still necessitates files to be converted into a single specific format for editing and archiving. Efficiency however dictates that uber valuable editing systems not be bogged-down with the transcription of files into a universal format for editing. Editing systems are for editing, thereby generating viable monetization-ready content. The simplest solution then seems to be having some other system take care of transcoding files, and automate that encoding. The journey toward automation of systems and advancement of file based workflows for the broadcast industry begins with carefully selected hardware and software once the studios’ budgeting is discerned.

Imagine Communications is heartily invested in file-based workflows for the broadcast industry. Let us take a peek at what they did to help client organization Rotana TV’s Egyptian branch as they overhauled and upgraded to maximize potential, taking advantage of existing workflows and internal systems, where possible. Imagine Communications incorporated and integrated quite a bit of new hardware and software in this updating process.

Imagine Communication’s Nexio Volt integrated media servers, and the Nexio Farad scalable online storage systems were at the core of this sizable undertaking. The Nexio Volt is a spatially compact baseband video server. This high-performance machine fits 4-bidirectional SD/HD channels into just 1 space in the racking system. This durable multi-purpose machine is easily combined with other Imagine Communications equipment. The award-winning suite of products in the Nexio family provide smooth function and flexibility for a company’s workflow, ingesting and playing out high quality channels. The Nexio Farad insures content availability by allowing access to content even in the face of multiple (and even simultaneous) other failures, scalable storage and bandwidth, ease of maintenance including remote maintenance and diagnostics, has over a petabyte of online storage with RAID 601 storage protection, 10 gigabytes per second of guaranteed available bandwidth and much more. 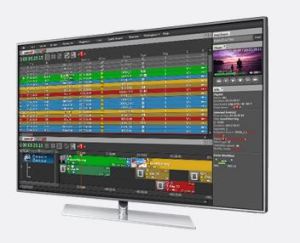 This power duo of products was utilized in concert with several other pieces of equipment from the Nexio product line that Rotana TV already had installed previously on site. These included: Imagine Communications’ ADC™ Playout Automation (Automated Content Management and Distribution). The device’s scalable architecture allows extreme flexibility in this piece of software. Combined with Rotana’s other equipment, it provides them the ideal platform for content control and delivery. The ADC also has a wide variety of optional features like Motion, Link-List, Live-update and others. Rotana TV’s studio upgrade included HD, the new equipment and their existing ADC were already HD compatible, as was their Imagine Communications’ Nexio Motion digital media management. 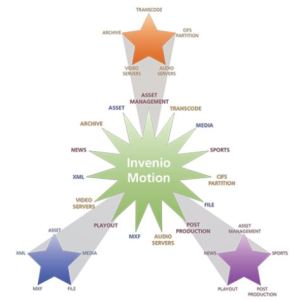 Nexio Motion does more with less; it helps facilitate other devices and software’s workflow viability by such means as helping access and manage data and content all related storage systems. It helps speed the transcoding process while reducing the error factor. It also store copious amounts of metadata along the way, all automatically. It also has a number of manually activateable features such as: scheduling tasks at fixed times/dates, start workflows from certain designated external systems, copy and manipulate metadata from attached video servers, check ID’s, monitor storage usage including notification sent to system admins, and many other functions.

To help complete the HD side of the studio overhaul, the remaining Nexio equipment was upgraded to accommodate HD signals with Imagine Communications’ Nexio IconMaster modular master control. The Nexio IconMaster not only has everything you can think of, it’s been future-proofed and is, thus, configurable from SD to HD with no hardware change;

it is RoHS-compliant, has up to 8 channels controlled by a single RCP or SCP (remote control panel or software control panel) either one at a time or as master and slaves. There are several available hot keys as well as keys with fast reset functions, an assignable 2 channel squeezeback with a third background input, direct control of up to 12 auxiliary bus router inputs on up to router busses, 16 programmable and flexible effects with multiple segments, 12 to 22 directly accessible external routing inputs connectable to any size primary router, Native Ethernet or serial control of Platinum Routing Systems, third party router control is available, routing control capabilities are supremely flexible allowing router inputs to be re-arranged while in use, user-configurable LCD buttons, operate multiple channels from single panel including master/slave modes, Audio monitoring (embedded audio with external routing), provides up to 6 channels in 3 shelves of rack space, audio control panel offers direct access to channel gains, Up to 16 audio mapping profiles that may be assigned from the control panel, Four internal branding keys with up to 4 GB online logo storage, Static and animated logos, Analog and digital clocks, Eight channels discrete (SD or HD), Machine control via serial or GPI outputs, Full automation control, and much more. It also has some available options such as: CCS control and monitoring with Magellan CCS, intelligent audio control panel, enhanced software control application, Relay bypass with dedicated bypass input, and more

The last primary piece of existing integrated equipment was the Imagine Communications’ Platinum™ IP3 routers. These routers have redundant power supplies, resource modules, sync options, and crosspoints. They are built to last and weather less than optimal conditions and continue to operate. Additional redundancies can be had in the matrix module (due to dual slots) in resource, TDM, and sync categories. Capable of being expanded on air to matrices beyond 2Kx2K with 0 downtime, independent audio and video paths, near silent switching, mixed-signal routing (SD, HD, 3 Gb/s and audio) in a variety of configurations, Mux and Demux audio processing support, mono breakaway audio routing support, front loading modules allow continual operation even while components are hot, Multiplex 16 channels of audio into each video output, keeps this family of equipment in the forefront of technological sweetness.

Rotana TV (Egypt Branch) is using 14 channels at this time. It is now HD capable and internal operations have now been both improved and simplified. The company now also has streaming satellite connections available as well, via Arabsat and Nilesat. A planned future move is delivering content via IP to Canada and South America to complement their current Arabian, European, and US footprint.