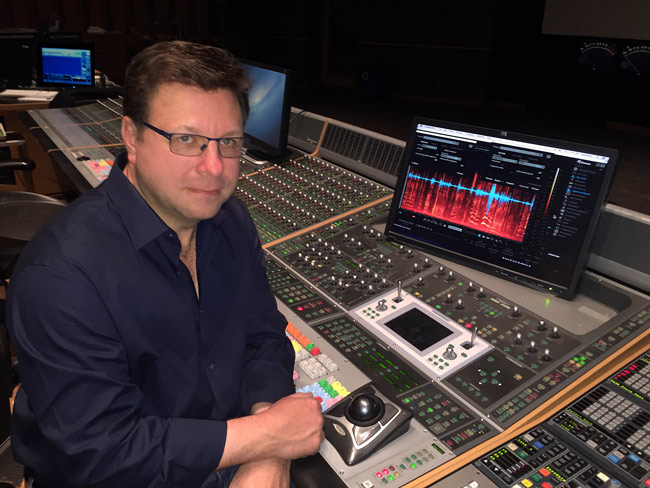 Ron Bartlett, an independent re-recording mixer based in LA, earned his stripes with a string of feature films that started with Heat and has expanded to include blockbusters Die Hard, The Fifth Element, Mission: Impossible, Prometheus, The Life of Pi, and several X-Men films.

An early adopter of emerging technology, Bartlett has witnessed countless evolutions of audio software fizzle and fade. However, the technology available today for cleaning up production dialogue exceeds anything that has come before. With these new powerful tools, Bartlett is quick to point out that it’s actually possible to push the technology too far—too much noise reduction may actually sterilize a performance.

Throughout his career, one secret to success has been the ability to strike the right balance between cleaning up dialogue and preserving a scene’s authenticity. Bartlett recalls hearing takes where the dialogue had been over-edited to such an extent that it no longer sounded natural. The edited-to-death versions, while technically less noisy, had been stripped of all their emotional weight.

In some cases, subtle elements in the original take—whether they are snippets of breath, sighs, or other emotional inflections—can be central to an actor’s performance. Despite being “noisier,” these livelier and more dynamic performances provide an authentic and compelling viewing experience when mixed together with the music and SFX.

Walking the line between too much and not enough noise reduction is easier said than done, especially when one is working alone in a quiet room. Dialogue editors don’t have the luxury of knowing how the dialogue will sound when placed against music and effects in the mixing theater.

“The trick is removing the offending sound while still keeping the air and power of the dialogue,” Bartlett advises. “It’s important to be careful with settings, so that you reduce the noise perceptively, but avoid driving a divot into the vocal range.”

When working with errant sounds in the vocal spectrum such as camera whines, it’s important to reduce, rather than eliminate entirely. Knowing the appropriate amount of dB reduction can make a huge difference in a “good” take versus a “great” take.

iZotope’s RX is Bartlett’s go-to tool of choice, saving him valuable production time and wowing supervisors in the process.

“I use iZotope’s RX Audio Editor in Pro Tools for the majority of my cleanup work. High frequency whines from lights can easily be painted out with pinpoint accuracy with the Spectral Repair tool,” says Bartlett. “For some noise, such as camera whine right above 1 KHz, I can preserve the dialogue while zeroing in on the noise very carefully.”

Other tricks up Bartlett’s sleeve involve cleaning up room tone right up to the start of the line, and then letting the dialogue play naturally with little noise reduction, only to let the noise reduction pick up immediately afterwards. This only works for subtle changes, but taking out two or three dB of a certain type of noise can be critical to keeping consistency across edits. Tools like RX enable this type of surgery, whereas relying on console automation is just not as effective.

“RX has truly become a standard in post sound for feature films and television,” adds Bartlett, “I used it very early on and helped spread the word. Clients are constantly amazed when we pull off matching something or saving a scene from horrendous noise. That is the true worth of RX, and I couldn’t imagine doing my job without it now.”