Shooting night scenes during daylight (day-for-night) is a standard solution for many films, using filters or post-production color grading to adjust to convert the scene to a “night” look. While this blue-tinted solution resembles twilight more than night, the effect is usually sufficient.

What about the reverse? Can you create a convincing daytime scene filmed at night? While less common than its sister effect and rife with challenges, a “night-for-day” shot is a possible—and sometimes necessary—solution.

Pulling off day scenes filmed at night have a higher chance of working when the setting is indoors. First and foremost, you generally have more control over lighting conditions inside. Additionally, a smaller space may require fewer lights to pull off the effect than you would need for an outdoor setting. Sunlight is also typically confined as a source coming in through windows, and having artificial control over this may actually work in favor of your aesthetic. 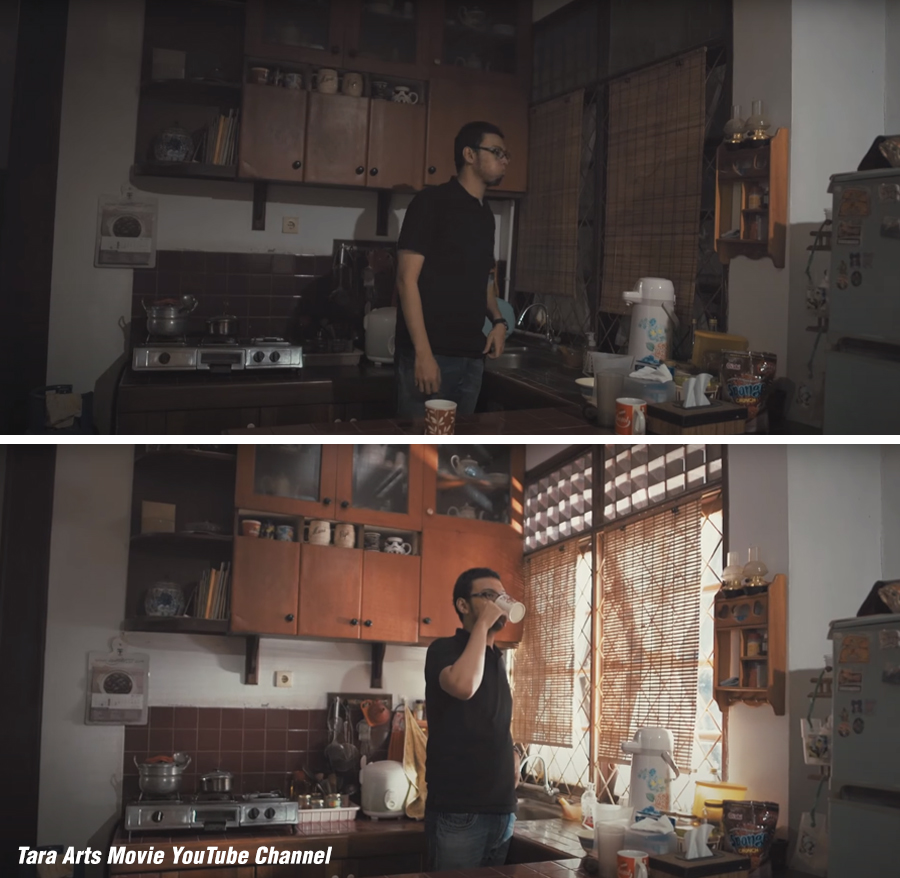 The first step to making this effect work is understanding the properties of sunlight. For example, sunlight is scattered through Earth’s atmosphere, giving sunlight (and the sky) a blue tint. Depending on the time of day, broad daylight can range between 5,000K – 6,000K. Because of the sun’s distance from Earth, light intensity and shadow sizes won’t change when an object is moved as it would with a close proximity light. A subject lit with three lights in different directions will cast three shadows. Sunlight will only cast one.

The best approach is to control the window lighting first, placing a powerful daylight-colored light (or the brightest light you have) outside and aiming in. Most interior scenes with authentic daylight often show the window glowing and the exterior details blown out. You’re halfway to a convincing setup if you can recreate this effect. Window sheers, blinds, or strategic light angles can often achieve this. Placing wax paper on the glass may help simulate the result, especially if placed behind window dressings.

With the window light in place, you will need to replicate how light bounces around a “sunlit” room. Place a second light as a general ambient fill light for the room. This light should be bright enough to flood the scene, bounce it off the ceiling for a more even spread, and of course, make sure it matches the daylight color temperature of the “sun” light.

Finally, light your key subject with sunlight-colored diffused lights (through a softbox or filters) for natural-looking light. With some tinkering, you now have the foundation for simulating sunlight through a window. As mentioned earlier, you can take advantage of this lighting control to create a more textured, artistic aesthetic. Experiment with color temperatures to simulate sunrise/sunset. Add a very subtle haze to create god rays, or play with blinds and curtains for some creative shadow play.

Simulating daytime lighting outdoors at night is a daunting and often impractical task. The amount of illumination required to flood an outdoor setting would be costly, and the bigger the location, the more impractical it becomes. Even with the proper lighting, pulling off the effect may prove futile. The effort required for a mediocre result may be better spent with a green screen (or background projection) or an additional production day if the budget and schedule allow for it.

However, creative challenges often call for innovative solutions, and filmmakers in a pinch don’t always have the luxury of extending the production. A night-for-day shot filmed outside is possible, with the following considerations:

Keep the shots as tight as possible. The smaller the field of view, the less area you will need to light. If running out of sunlight is anticipated ahead of time, it may be more productive to film all the wide shots first and save the close-ups and cover shots for the end. 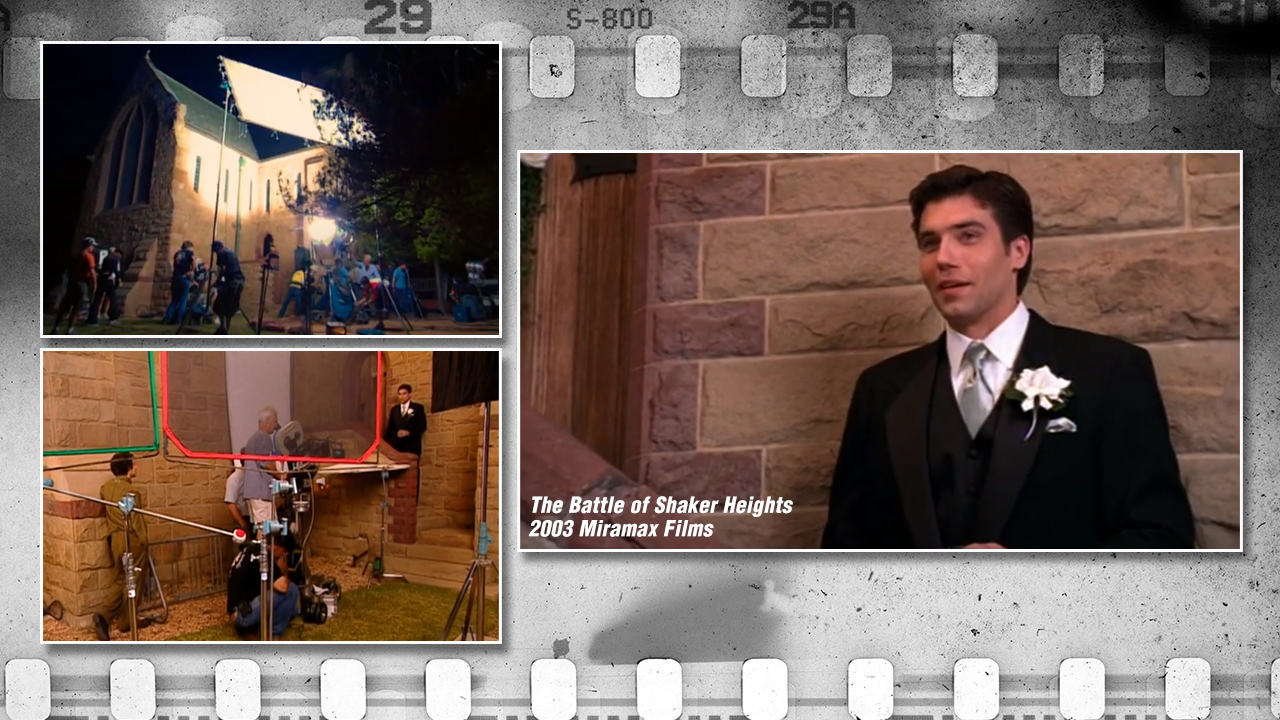 If possible, stage the scene against a wall or building. This will help simulate light bouncing off structures like sunlight and limit the background to light. A close-up shot of your actor against a wall will be easier to forge than a wide shot of your character with an open field behind them.

Limit the talent’s movement if possible. Unlike in sunlight, shadow size and light intensity will change based on the actor’s proximity to the lights. These shifts in lighting conditions—and multiple shadows cast—can break the illusion.

Flood the scene with as much light as you can afford. When simulating sunlight, you almost can’t have too much light. The more daylight-colored light you can flood on the set, the closer you get to sun-like conditions.

Understand that the end result isn’t going to be perfect. The sun is a spectacular light source, and even with the best efforts for a convincing effect, the exact conditions are almost impossible to recreate. Even when done well, the scene will likely look flat and uninspired. This is not an ideal setup or solution and is usually only used when the alternative is to lose the shot.

A great example of this was the film The Battle of Shaker Heights, produced during the second season of Project Greenlight in 2003. They were on location filming an outdoor dialogue scene at a church with only a few shots left when they ran out of daylight. The film was moving at lightning speed on a very tight budget, so a second day was off the table. Desperate, they pulled out the massive lamps, kept the shots tight and up against the church wall, and flooded the scene with as much light as possible. A trained eye could see it was artificial. However, it was good enough to pass, and they were able to complete the sequence.

Some cameras have extreme low light recording ability that can generate daylight-ish images with low light. While this option is not ideal, it may help provide extra shooting time during twilight.

Taking the sun out of the equation can be another option. During the production of his 1994 film Clerks, Kevin Smith filmed at the actual convenience store where he worked. The caveat was he was only allowed to film after hours when the store closed. He did not have the budget to simulate sunlight through the windows, so he devised a simple solution. When our hero, Dante, shows up for work in the morning, he cannot roll up the metal shutters covering the windows, and he posts a sign, “I assure you, we’re open.” This not only created a joke, but it provided him the freedom to film inside without worrying about sunlight.

Sometimes all you need is a little punch-up. When filming the library reading room scenes in 1984’s Ghostbusters, they had to complete their filming early in the morning before the library opened. The team popped in a few large flood lights up in the loft to augment the weak sunlight already coming in. (A keen eye will catch a glimpse of this flood light on the upper right edge of the frame).

When dealing with natural light, inconsistencies can be a frustrating experience. As the expression goes, “necessity is the mother of all inventions.” Sometimes a “light” adjustment can go a long way.