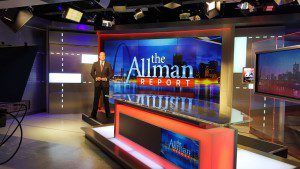 With a panoramic view of the St. Louis, MO skyline, an ultra-modern look and state-of-the-art video and audio equipment, First Rule Film & Broadcast (a division of Pelopidas LLC) is the city’s one-stop shop for high-definition film and broadcast services, including commercial advertising production, feature-film development and documentary and web content, and post-production and editing services. Occupying two floors of a high-rise building in the St. Louis area, First Rule’s four main facilities include Studio 17, a network caliber broadcast studio; Studio 16, a sleek, 30-by-30-foot curved wall broadcast space; Vue 17, a broadcast-ready event space that can accommodate 200 people; and a radio studio, along with offices and edit suites.

The filmmaking and broadcast community, locally and internationally, has taken notice. Just a few days after First Rule cut the ribbon on its Studio 17 space in late 2014, the events in Ferguson, MO, unfolded, and an influx of media descended on the suburb of St. Louis. Many outlets, including FOX News, the BBC, MSNBC and CNN, chose First Rule’s Studio 17 as their base of operations for reporting during the crisis. Later, ABC-affiliate KDNL-TV signed on as Studio 17’s first renter. In January 2015, KDNL-TV began using Studio 17 to produce a 30-minute broadcast called “The Allman Report” that airs five days a week. The show is an informative, debate-style news program focusing on important topics with guest commentators and a social media presence.

Along similar lines, and to continue to gain further traction as a major player in the broadcast and film market in St. Louis, First Rule wanted to showcase video clips demonstrating its comprehensive range of services to potential clients visiting its facility. For this, the company decided to deploy an Exterity IP video distribution system throughout its facility to showcase its comprehensive range of services to clients and visitors, as well as use the solution internally to stream video and TV to staff.

“We’re a media company, so when a client walks in our door, we want to be able to give them clear examples of the types of 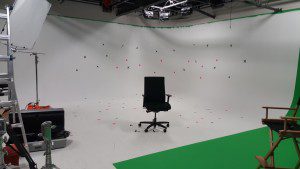 media we produce — whether that’s a news segment or a documentary. We have four display screens at the front of our facility, and we wanted to be able to run a different channel on each screen to clearly demonstrate our portfolio,” said Christine Du Vall, Production and post-production engineer at First Rule.

To do this, the company needed a scalable, unified IPTV system that could easily distribute high quality video and TV throughout its premises. The system also needed to be flexible, robust, easy to monitor via a centralized interface and low maintenance. The Exterity enterprise IP video system met all of First Rule’s criteria and was deployed to distribute live news feeds, entertainment and promotional content produced by the company to help its current and prospective customers to get a first hand demonstration of the quality of its productions and varied content it creates. 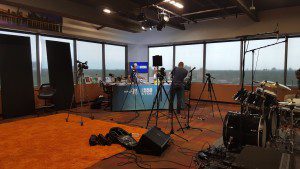 Working closely with First Rule engineers, Exterity put together an end-to-end IP video system that distributes TV and video over the media company’s IP network without disrupting corporate communications. At the heart of the solution is the Exterity AvediaServer for centralized management, which works in tandem with three AvediaStream encoders that stream video over First Rule’s existing IP network. Additionally, 30 AvediaPlayer set-top boxes connect TV sets throughout the facility to the network.

“One of our key requirements was to implement a system that could flexibly and securely distribute video throughout our facility and that didn’t rely on coaxial cable. The beauty of the Exterity enterprise IP video system is that as long as there’s a network drop, it’s a location for a TV. Our staff can even watch content from their desktops if they don’t have a TV available,” Du Vall said.

With this new Exterity solution, First Rule can now cost-effectively distribute TV and video throughout its facility so that employees can stay on top of all news, in real time, and prospective clients have a clear understanding of First Rule’s offerings. First Rule can stream live and pre-recorded content to breakout areas and to individuals’ desktops and edit suites. Management can also monitor content and determine who can access what material, as well as perform company-wide actions centrally, such as turning off all TVs simultaneously from one location.

One feature that particularly stands out for Du Vall is the ability to create her own channels. “As a broadcast facility, we’re 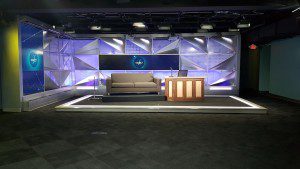 always streaming channels of our content. With the Exterity enterprise IP video solution in place, I can create my own demo channels, which is a great feature for us.”

“The installation at First Rule is proof that Exterity IP video solutions are perfectly suited to media companies of any size,” said Colin Farquhar, CEO at Exterity. “Our system has been designed to turn any source of content into IP streams, making it easy to deliver to any screen regardless of the display’s specifications. With post-production services taking place directly in the studio, First Rule also needs to ensure that all its content is completely secure when being distributed over the network, a feature that we provide through state-of-the-art content protection standards like Conditional Access and HDCPv2.”