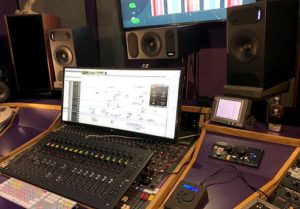 London-based audio post production facility Fonic has upgraded the monitoring in two of its studios to incorporate PMC twotwo.6 speakers.

The monitors have been installed at 5.1 satellite studios at the homes of Fonic’s owners and founders, Jake Roberts and Barnaby Templer. Both studios are used for a variety of projects and are equipped with Avid S3 desks and a selection of analogue outboard and synthesis.

“Prior to this upgrade we were using PMC TB2 DB1 speakers, which we really liked,” Jake Roberts says. “However, the twotwo.6 monitors are even better – the sound is more detailed and the stereo imaging is amazing.”

The new PMC systems include RC1 wired remotes with an easy to use jog wheel. These give access to all the functionality of the rear panel, making remote set up, input switching and EQ of stereo or surround systems quick and easy.

“Having the remote makes it a lot easier to set the monitors up and it’s great to have a dedicated control for all the functions,” Roberts adds.

Founded in 2004, Fonic’s main headquarters is in Shoreditch, East London – on a real working farm. The facility has expanded over the years and now has six studios on site, including four 5.1 premixing/sound design suites, a main 5.1 mixing studio with a vocal/ADR booth and a dedicated 5.1 foley studio. Fonic offers a full sound post production service for documentaries, commercials, TV animation, drama, radio, feature films, gaming and online media. Since its formation, it has worked on some of the largest animation shows in the world, including Peppa Pig, Ruff Ruff Tweet and Dave, Hey Duggee (which recently won a BAFTA) and Thomas and Friends.

Fonic’s new PMC monitors are being used across all projects and both Templer and Roberts say they are delighted with the upgrade.

“They are amazing,” Roberts says. “Anything that lets to hear more of what is going on in a mix makes our lives easier and makes the end project so much better. The twotwo.6 bass is outstanding; you really do think you are listening to a much larger cabinet.”