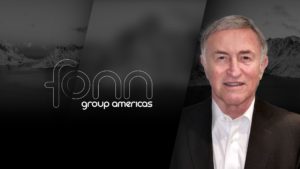 ary 18, 2020: Fonn Group, a Norwegian technology group, today announced the launch of Fonn Group Americas, a regional operation that will bring its Mjoll and 7Mountains brands to the North and South American markets. Isaac Hersly, a pioneer in the US media and broadcast markets, will lead Fonn Group Americas.

Hersly’s background includes serving as President and COO at Chyron, where he was instrumental in building the company from the ground up to become a leader in the US broadcast software industry. He also founded the successful operations for world-leading broadcast technology company Vizrt in the Americas, spending more than 18 years with the business. In addition, he spent many years on the customer side of the broadcast industry, as Vice President of the ABC Owned TV stations.

“We are extremely happy to have someone as well-known and respected as Isaac onboard to lead our operations in the Americas. He brings with him a unique understanding of the broadcast and media markets and has successfully built companies from the ground up in a demanding territory”, said Haavard Saunes Myklebust, CEO of Fonn Group.

Discussing his appointment, Isaac Hersly said: “Fonn Group companies Mjoll and 7Mountains are disrupting the media technology market with a new breed of tools for journalists, editors and producers. The solutions are built on modern, web-based technology and have the end user in mind. The US broadcast and media production markets are ready for streamlining their workflow utilizing cloud and AI tools and this is where we can help.”

Mjoll and 7Mountains are co-exhibiting at the NAB Show in Las Vegas, April 18-22. Visit both companies in South Upper hall, stand SU8524.

Fonn Group invests in companies delivering production and journalistic tools for the media and entertainment industry. The group companies are Mediability, a Nordic reseller and systems integrator, and software companies Mjoll and 7Mountains.

Mjoll is a software company delivering cloud-based production tools. The company was founded in early 2019 with a team of media technology industry profiles. Read more at www.mjoll.no

7Mountains is a software company delivering story-centric journalist tools to the media market. The company was founded in 2018 and entered the worldwide broadcast market with DiNA at the IBC show in 2019. www.7mountains.com