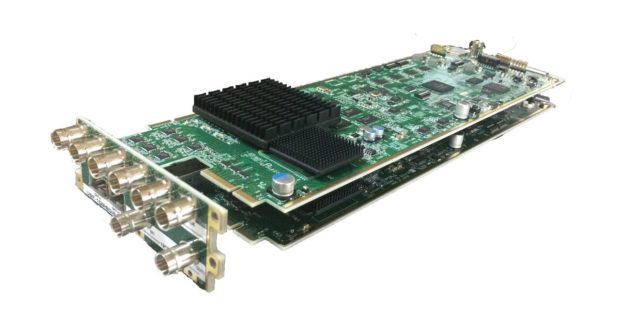 Cypress, CA – FOR-A announces plans to introduce the USF-10IP 10 GbE IP Converter at the upcoming NAB Show. The company will debut the IP Gateway USF-10IP series, along with over a dozen other brand new solutions, in its NAB booth, #C5117.

The USF-10IP is a dual 10 GbE video over IP module series that offers high-quality mutual conversion of any major standard IP video format, including ASPEN, NMI, SMPTE2022-5/6, TR-03/04 and most of the latest IP formats. The unit will also act as a translator between SDI baseband and IP systems, and is compatible with 4K UHD (2SI/SQD) and multi-format input/output video.

With new products like the USF-10IP being showcased, FOR-A’s NAB booth will demonstrate the company’s commitment to the construction of a comprehensive IP-based broadcasting infrastructure. Offering compatibility with various IP formats, the USF-10IP integrates baseband-systems that separately configure with SDI, such as studios of a broadcast station, into an IP backbone-network. With its file-based products connecting IP and baseband technology, FOR-A aims to be a leading provider of comprehensive IP, SDI and file-based solutions.

The USF-10IP will be shown in the IP/12G-SDI section of its booth along with several other new products, including the Fujitsu IP-HE950 video transmission solution, 12G-SDI supported new MFR-4000 series routing switcher, MV-4200 series of multi-viewers and ESG-4100 test signal generator. Other sections of FOR-A’s NAB booth will include the live production, camera stage, 4K production and HDR, virtual studio, and file-based and frame rate conversion areas.

For a full range of HD and 4K production and processing solutions, as well as IP-based products, visit our web site at www.for-a.com.